New Delhi, Oct 17 (IANS): Rattled by the strengthened US naval presence in the region, China has gone in for a fresh round of gunboat diplomacy with the Association of South East Asian Nations (ASEAN) countries as it sees these nations looking at Washington for support to keep the dragon at bay.

The recent meeting in Tokyo of foreign ministers of the Indo-Pacific quad countries comprising the US, India, Japan and Australia also seems to have been factored into China's stepped up diplomatic drive with Foreign Minister Wang Yi undertaking a whirlwind tour to the ASEAN neighbours. 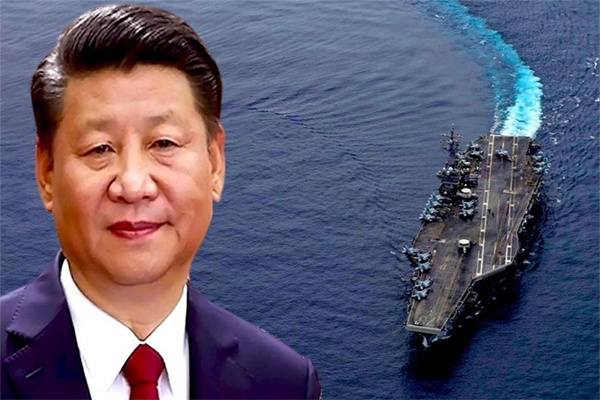 The ASEAN grouping includes countries such as Indonesia, Malaysia, the Philippines, Singapore, and Thailand while some partner countries like Vietnam also have close ties with the group.

China has been continuously bullying these countries by staking ownership claims over their outlying islands and sending warships into their Exclusive Economic Zones (EEZ) to intimidate them.

However, in the context of the changed geopolitical situation, Wang went on a hectic "goodwill visit" to the ASEAN region this week. While assuring them of support for a vaccine to fight the deadly Covid-19 outbreak and closer economic co-operation, China's gunboat diplomacy also makes it clear that these countries must keep clear of the US.

Beijing and members of ASEAN should work together to remove "external disruption" in the South China Sea, Wang said during a joint news conference with Malaysia's Foreign Minister in Kuala Lumpur.

Wang claimed America's Indo-Pacific strategy was a "security risk" for East Asia, saying: "I believe all parties see this clearly and will stay vigilant against it. The South China Sea should not be a ground for major power wrestling teeming with warships."

"China and ASEAN have full capacity and wisdom, as well as responsibility, to maintain peace and tranquility in the South China Sea," Wang added.

As an economic sop to Malaysia, China committed to purchase 1.7 million tonnes of palm oil until 2023 and agreed to encourage increased shipments of the product which is crucial for the development of the ASEAN member's economy.

The joint statement issued after the meeting also mentions that the two countries agreed to "further advance mutually beneficial cooperation under the ambit of the Belt and Road Initiative."

However, the flip side is that China has been asserting its claim to the South Luconia Shoals, a fishing ground off the Malaysian state of Sarawak.

This year, a Chinese research ship spent a month surveying Malaysia's EEZ amid a standoff with a Malaysian oil exploration vessel near disputed waters.

The Philippines, too, had lodged protests with China in April this year after Beijing unilaterally declared the creation of new administrative districts on islands near its coast.

Vietnam had a similar experience as well.

In early April, Vietnam also said one of its fishing boats was sunk by a Chinese maritime surveillance vessel.

China has in recent months held military exercises in disputed parts of the South China Sea, while Washington has accused Beijing of attempting to build a "maritime empire" in the area.

US Secretary of State Mike Pompeo has said Washington wants a "free and open" Asia not dominated by any one country.

The Philippines' military chief General Gilbert Gapay told foreign media in Manila recently that the US had stepped up naval patrols and China's coastguard had been very active, while its maritime militia were "practically swarming most areas of the Philippines' exclusive economic zone".

US President Donald Trump has in a tough approach to Beijing, ahead of the November presidential election, strongly denounced China's maritime muscle-flexing against its neighbours.

Washington has accused Beijing of bullying its neighbours by sending warships close to their offshore oil and gas operations and holding military exercises to threaten them, at a time when these countries are engaged in a grim fight to contain the coronavirus outbreak.

Title: Beijing on friendship drive in South China Sea after US flexes muscles