New Delhi, Feb 26 (IANS): Three days of violence in several areas of the northeast Delhi that left 27 people dead and over 200 injured, was one of the deadliest in the national capital, almost 28 years after the demolition of Babri Mosque in Ayodhya.

On Sunday, northeast Delhi residents woke up to sporadic violence and as the day progressed it turned nastier engulfing many areas, claiming lives and injuring several.

It strained the social fabric and destroyed the harmony, established by the people of different communities after the riots in the aftermath of demolition of the Babri mosque in 1992. 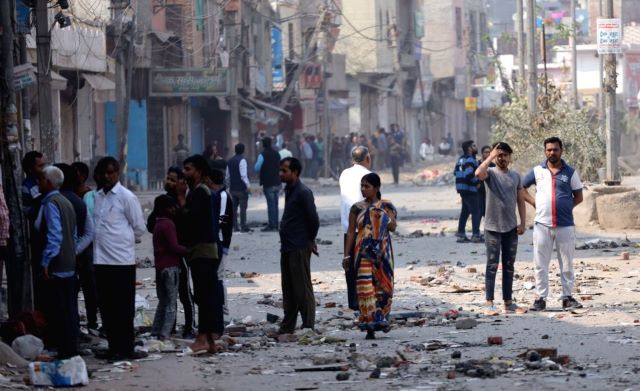 However, the unity among communities was reflected in their efforts to keep miscreants away by coming out to each other's security. In the Chand Bagh area, despite the incidents of stone pelting and lobbing of petrol bombs by mobs, the locals bonded together to save the Durga temple and the Jama Masjid that faced each other in the area.

Speaking to IANS, Shahe Muwazzam Ali, a Chand Bagh resident said, "We (Hindus and Muslims) have been living together peacefully for almost three decades in the area and have built a inter-dependent social living. How could we allow a mob to rip it apart."

"When on Sunday 400-500-strong mob started moving towards the Durga temple, we, locals, formed a human chain to protect it," said Ali.

For Hindu and Muslim residents of Seelampur, Jafarabad, Chand Bagh, Maujpur and Kardam Puri it was three days of nightmare that claimed 27 lives and left over 200 injured, including security personnel.

The violence that erupted on Sunday probably stemmed from the growing friction among pro and anti-new citizensip law (CAA) and the National Register of Citizens (NRC) activists and between supporters and opponents of the Narendra Modi-led government.

The impact of the three days of clashes was quite visible on the streets that were littered with stones, bricks, shattered glasses, burnt vehicles, and razed shops and houses by its sides on Wednesday.

However, all was not lost in the hatred spewed by some and violence perpetrated by some others.

Pointing to signboards, Kalama Ahmed Khan, a Chand Bagh resident, said, "You can see the buildings here have names of Hindus as well as Muslims. By standing united and forming a human chain, we prevented the mob from attacking the religious place.

"The miscreants wanted to damage the temple, fuel distrust among the communities and put the blame on Muslims. But we, both Hindus and Muslims, stood like a wall and didn't allow them in the area."

While the temple and the mosque could be protected from any harm, the miscreants went on rampage and torched shops and other establishments facing the road, and a petrol pump and several houses on the other side of the road that in Bhajanpura.

Vijay Singh, whose liquefied petroleum gas (PLG) agency razed, said a 3,000-strong mob attacked the showrooms and shops on Sunday evening. "We heard the noise and provocative slogans being raised by it. We shuttered the showroom, went upstairs and locked ourselves there," he said.

It had happened after almost 30 years when the riots hit other areas of Delhi, he said. "Since then we were living cordially in the area. The fresh wounds will take years to heal," he said.

The story in Maujpur and Jafarabad was no different where mobs of miscreants roamed the streets with iron rods, hockey sticks and other implements trying to rip the social fabric and disturb the communal harmony.

After three days of horror, normalcy started limping back in the Kanda Market area of Maujpur.

Speaking to IANS, a local resident said, "A few shops have reopened on Wednesday. But the people are scared amid rumours making the rounds." His fear was apparent when he refused to disclose his name.

However, the locals could be seen interacting and enquiring about acquaintance and the situation in the neighbouring areas.

Rahul Tyagi, a Maujpur resident, said, "We are living here together for a long time. We stood by each other's side and prevented miscreants from making serious damages in the inner parts of the area."

To restore normalcy, Hindus and Muslims in the Brij Puri area took out a peace march raising slogans 'Hindu Muslim bhai bhai', challenging vested interests to dare damage the social fabric marked by trust and harmony and woven with patience and respect towards all.