Mangaluru, Dec 22: Mangalureans are known for their sense of humour. As soon as mobile internet was restored on December 21 night, social media accounts and WhatsApp statuses started flooding with funny trolls and memes about the 48-hour internet suspension, curfew and also the much-trolled Pumpwell flyover.

A video of a person doing aimless things to pass time as he does not have mobile internet seems to be a favourite on most WhatsApp statuses. The video titled ‘Mangalore People Life Without Internet Was Like’ shows the actor swinging on a coconut frond and chasing a goat to kill time.

There are several other scenes of different movies that have been altered into memes on how people felt during ban and after internet services were restored. 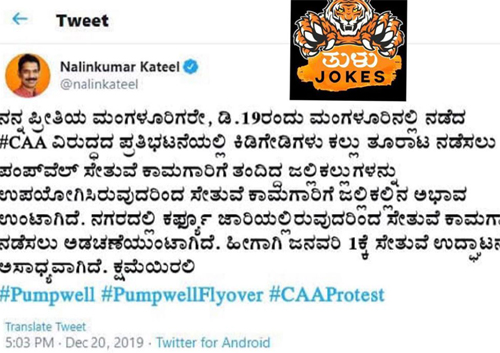 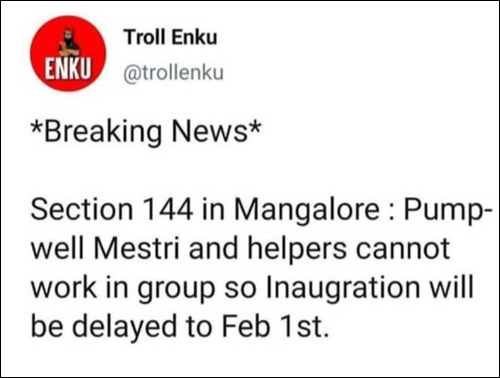 Among the hilarious ones doing rounds is a doctored tweet from a parody Nalin Kumar Kateel account, giving reasons that Pumpwell flyover won’t be completed on January 1 as all stones which were brought to build the flyover were used by protesters to pelt at police during the CAA protest at State Bank on December 19.

Another meme again takes a dig on the MP. "Why people went to StateBank when I had asked them to come to Pumpwell," the funny caption reads. Also a poster of movie KGF Chapter 2 which states ‘Rebuilding an empire’ has been doctored to replace Yash with Nalin Kumar Kateel and states ‘Rebuilding Pumpwell Flyover’.

Yet another meme says that as the masons cannot work in a group due to the curfew, the inauguration of the flyover has been postponed to February 1.

There are quite a few other hilarious pictures mocking the MP for assuring that the flyover will be completed on January 1.

The Pumpwell flyover that lies at the intersection of NH66 AND NH55 was ideated to absorb the excess load of the intercity and highway traffic, but for nearly 10 years since the issue of the Letter of Approval (LOA) for the project, it has only added to traffic woes for the city.

The official inauguration of the Pumpwell flyover was supposed to be done on March 31 2013. The date has come and long gone, and since then, residents have heard new and multiple deadlines being set time and again by either local representatives or the National Highway Authority of India (NHAI). February 2014, January 2016, June 2016, June 2017, December 2017, April 2018, February 2019 all passed us by and now January 1 is being projected as the date by which the project will be formally complete.

It is not just the delay. For many old-timers, construction came at the cost of the emotional ‘sacrifice’ of the Mahaveer/Pumpwell circle. It was a landmark, a local icon representing Mangaluru, similar to what Taj Mahal is to Agra or the Vidhana Soudha to Bengaluru. At the circle stood an iconic 26-foot tall ‘Kalasha’ that was a part of an earlier beatification effort and had been donated by Jain community leaders in 2006. However in 2014, to the dismay of several people, the NHAI had to move the landmark to be relocated elsewhere to accommodate the fly-over project.

Even after all this and years of construction subsequently, the flyover at Mahaveer circle (Pumpwell circle) remains a picture of deserted work-in-progress. Amidst the presence of construction debris, abandoned mechanized equipment, earth-movers and iron rods popping out of the unfinished structure, the project appears to be at a standstill.

On its completion, the four-lane flyover attached to NH-66 would allow the motorist to drive through the 900-meter stretch at a rate of 60 to 80 km/hour, whereas three tunnels below the 5.5 meter elevated structure would have connected motorists from the city to NH55. But the project, that has already seen the passage of two NHAI directors in the last 10 years, is far from realisation.