Belagavi, Sep 13: The saffron cloak worn by Bishop Derek Fernandes, in addition to sporting vermilion tilak on his forehead while offering Mass, in the photographs that have appeared on social media have created a controversy in Roman Catholic Church of the country.

These pictures are posted on Twitter by Savio Rodrigues, who is a journalist-activist. The pictures posted show many unidentified men wearing the saffron robe and rudraksha malas on their neck giving the bishop company as co-celebrants while offering the Eucharist in a church which has photos of Hindu swamis on its wall. 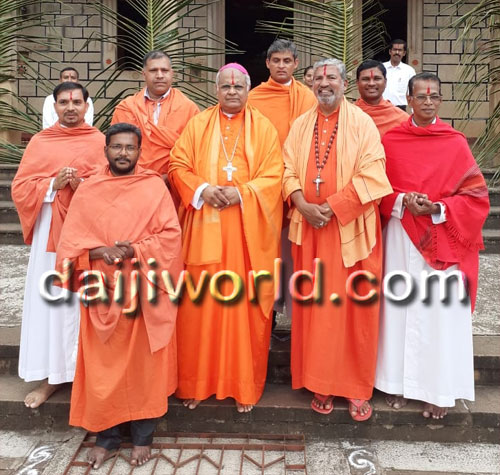 While Christians were furious with this act of high ranked clergy like bishop and warned him against such activities, some even said what he has done is blasphemy. However, some others said that it is a ploy by Bishop Derek, who was appointed as the sixth bishop of Belgaum by Pope Francis on May 1, to mislead Hindus and get them converted to Christianity.

Bishop Derek Fernandes, however, is not available for clarification as he is in Rome.

These photographs were supposedly taken on August 29 as per the information given by Philip Kutty Joseph, vicar general of Belgaum diocese. The bishop was on a visit to a church in Deshnur, around 28 km from Belagavi.

Philip Kutty said, "The said church was called as Virakta Math earlier. Jesuit priests went to this church for the first time more than 40 years ago and took on the Indian custom like wearing saffron robes. The tabernacle of the church is in the form of Shiva Linga."

According to the clarification given by Fr Nelson Pinto, a priest of Belgaum diocese, over phone, this church at Deshnur was first accessed by Jesuit priests and they adopted the local culture as the region was predominantly inhabited by Lingayats.

Fr Pinto says that the Jesuit priests themselves became vegetarians and also took upon the local culture and practices. But he also clarified that this was not done to convert the local people.

In his explanation on the issue, Filipe Neri Ferrao, metropolitan Archbishop of Goa and Daman and Patriarch of the East Indies said that though this incident involving bishop Derek Fernandes has not come to his notice, it appears to be a kind of practice which is called as 'Inculturation' as called in the Roman Catholic Church.

Filipe said, "The photographs show that the Eurcharistic ceremony in the church appears to be the assimilation of local culture, which is called inculturation. It can be seen in the attire they are wearing and also the liturgy."

Some other Catholics have felt offended by this post of Savio Rodrigues. One such person said, in reply to the tweet of Rodrigues, "Hey Savio or whoever you may be.. please do not speak against our Catholic religion. You have no right to talk against our religion."