Mangaluru, Aug 8: A session on ‘Swaraksha’ about safety of women and self-defence techniques was held on August 1 at St Agnes PU College.

‘Swaraksha for Women’ is an effective one hour self-defence training held especially for women, which Karthik S Kateel had conducted with the help of his mother Shobalatha. Karthik started the session asking questions with the students that did they feel frightened or intimidated when out walking alone. How would we react when we are approached by an attacker? Personal safety has become an issue of importance for everyone, but especially for women. 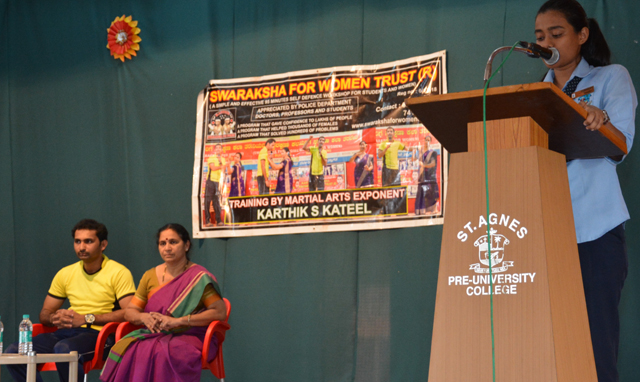 To protect one from such situations martial arts Guru Karthik demonstrated with 5 techniques formulated by him on the basis of physiology and real incidents.
Karthik and his mother together displayed these tricks which do not advocate punches, kicks, blocks which would have been difficult for women who are not trained under martial arts. He also told that these tricks can be learnt by a 6th std student to sixty year old women.

At the end of the session, to entertain the gathering he also demonstrated some of the unique martial arts stunts which really wowed the spectators.