Mangaluru, Jul 14: Episcopal ordination of Dr Peter Paul Saldanha will take place on September 15 at 9.30 am at Rosario Cathedral in city.

Dr Peter Paul Saldanha was appointed as bishop of Mangaluru diocese by Pope Francis on July 3. He will take over from hitherto bishop Dr Aloysius Paul D’Souza, who served the diocese for 22 years.

Apostolic nuncio from New Delhi, cardinals, bishops, clergymen, religious nuns and thousands of faithful from the diocese and also outside are expected to participate. 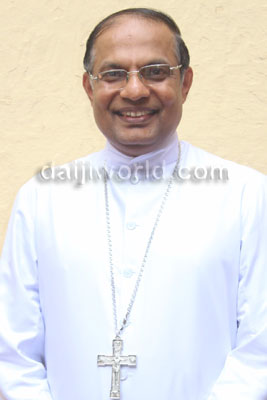 More details on the ordination ceremony will follow in the coming days.

Fr Peter Paul Saldanha, born on 27 April 1964 in Kirem parish, was ordained on May 6, 1991. He served as assistant priest at Moodubelle parish of present Udupi diocese and in Milagres and Vittal parishes in Mangaluru diocese.

He later went to Rome and earned a Licentiate in 2001 and doctorate in Biblical Revelation in 2005 from Pontifical Urban University where he had been on the faculty till recently.

Fr Peter Paul Saldanha has authored a book titled ‘The Church: Mystery of Love and Communion’ which reveals his knowledge and commitment to the church.