Mangaluru, Apr 3: A Yakshagana artiste of Kateel Sri Durgaparameshwari Prasadita Dashavatara Yakshagana Mandali has been suspended from the troupe, for his performance that violates the Election Commission’s model code of conduct.

The artiste identified as Poornesh Acharya, had supposedly taken a dig at All India Congress Committee President Rahul Gandhi in one of the plays, after the Election Commission’s model code of conduct had set in. 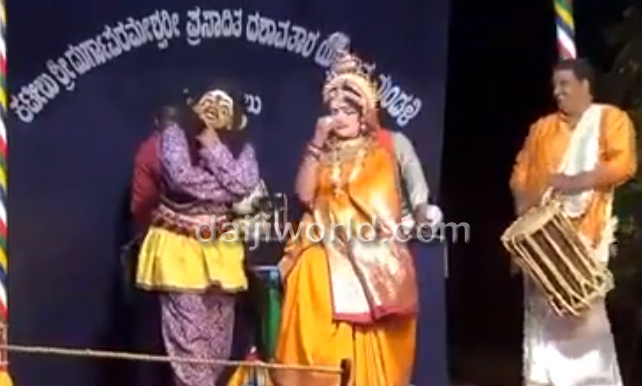 A clipping of Acharya’s performance started making the rounds on social media with the caption, 'Rahul Gandhi gets trolled in Yakshagana too', which came to the notice of the election officials.

Speaking to Daijiworld, Moodbidri returning officer Prasanna V says that the troupe Kateel Sri Durgaparameshwari Prasadita Dashavatara Yakshagana Mandali is registered in his jurisdiction and had approached the Moodbidri election office seeking permission to perform plays. As they had submitted that the play is based on religious lines, they were permitted.

"When we came across the clip on April 3, we took suo moto cognisance and investigated the matter and found that the artiste had enacted the sequence after the election code of conduct had set in. Though Rahul Gandhi's name is not mentioned, it is a direct implication to him. We have informed the temple authority who has suspended the artiste," says Prasanna.

He further adds that the troupe is scheduled to perform at Puthige on April 3. "An election official will be deployed to check if political references will be made in the play. If the troupe repeats, strict action will be taken against them. A show cause notice will also been sent to the troupe convenor, and henceforth they will be directed to pre-submit the script before their performance," adds Prasanna.

Shetty is not sure when exactly the play that is doing rounds on social media was performed. “We warned the artistes not to use any reference that indicates politics or politicians in Yakshagana performances,” he adds.

Deviprasad adds that the troupe performs in different parts of the district daily. On April 3rd, they are scheduled to perform in six places.

With Karnataka Assembly polls all set to be held on May 12, the Election Commission officials is keeping a close watch on public programmes, ensuring that the model code of conduct is not violated.

In Udupi, the nodal officer has asked Yakshagana organisers to submit an undertaking that they will not propagate political messages and also inform in advance if political representatives will be attending the event.