Was the MH17 flight actually the missing MH370?

New Delhi, Jul 27 (Mogul / Daily Bhaskar) : March 2014 : Malaysia Airlines MH370 mysteriously disappears. No traces of the plane, which authorities say crashed, have been found.
July 2014: Malaysia Airlines MH17 shot down over Ukrainian skies. No survivors.
When it was first revealed that Malaysia Airlines MH370 was missing, there was speculation that the flight was hijacked and would be used elsewhere. With the recent crash of another MH flight, there are theories which are too obvious.
According to a report on Mogul, it's not only that the official MH17 story is filled with gaps, but there are also bizarre accounts and 'coincidences' that are impossible to ignore.
DailyBhaskar brings you the EIGHT theories which will make one and all question if the recent MH17 which crashed was actually MH370 which is yet to found.
1. THE ALLEGED MH17 WAS THE SAME PLANE MODEL AS MH-370
2. DIFFERENT WINDOW CONFIGURATIONS THAN MH17
The plane wreckage shown in the propaganda pictures doesn't have the window configuration of MH17, whilst it matches the one of MH370.
The obvious conclusion is that the wreckage found at the crash site of MH17,  belongs to the 'lost' flight MH370.
3. MH17 VICTIMS: ROTTEN BODIES AND DRAINED OF BLOOD
"It is being said that a Dutch doctor who was at the scene within a day has released testimony that the bodies on the plane were rotten and dead days before the crash, which would corroborate what the military commander said and that evidence is there that they were also tortured before the crash. However, the translation from Dutch is very poor and I am working on secondary confirmation." Jim Stone was quoted as saying by Mowgul.
The aircraft allegedly shot down over Shaktarsk is a Boeing 777-200, ID number M9-MRD.
4. MH-17 PICTURE DOES NOT MATCH FACTS
The picture allegedly posted by one of the MH17 passengers does not match the identification number of the flight.
5. RELEASED VIDEOS CREATED BEFORE MH17 CRASH
While officials released the records of the rebels discussing the crashing of MH17 , it is imperative to note that the time said to be on those records is actually before the plane was actually shot down.
6. FLIGHT RADAR SHOWED Flight MH17 CANCELLED
Following the crash, the flight radar showed the Malaysia Airlines MH17 as cancelled.
7. INVALID PASSPORTS FOUND AT CRASH SITE
All passports that been found have been found with no damage, which is practically impossible, considering the hit by a missile and the 33,000 feet fall.
There are also passports which have been punched or clipped, which means that they are invalid making it impossible for the passengers to get past the airport protocol.
8. US BLAMING RUSSIA IS BASED ON SOCIAL MEDIA EVIDENCE 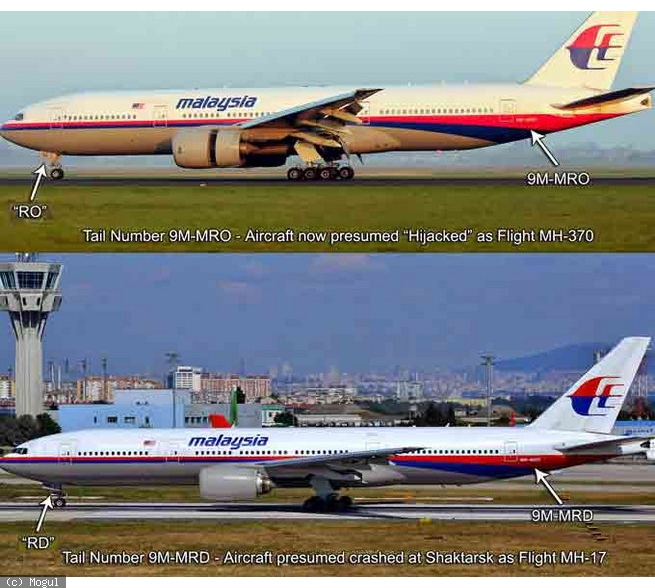 The US State Department said that the evidence gathered by US officials was based on the social media proof. This statement came forward during a talk between an AP reporter and an official of the US State Department.
The missing MH370 was also the same model, 777-200, but with a different ID number M9-MRO.
There were also reports of a MH370 passenger putting up a picture just days after his plane disappeared.
Tracking his phone, the locations were apparently marked in the US.
Considering how US has been against Russia after the MH17 crash, conspiracy theories have labeled it as a political cover-up.
News courtesy : Mogul / Daily Bhaskar (Daijiworld Cannot vouch for authencity)

Title: Was the MH17 flight actually the missing MH370?