A Resplendent Festival as Representation of National Character

Trichur Pooram is unique for its display of colour, sound and shape alongside caparisoned elephants. This year it was on tenth of May and it did happen after two years because of the pandemic. Naturally, it was much more enthralling for the people who assemble in lakhs. The name Pooram originates from its Sanskrit meaning of a full river, particularly symbolising the fullness of the assembly.

What is astounding is a simple fact that the Pooram is valued and celebrated not only by the Hindu worshippers of God Shiva and Goddess Parvathi but by the people of other communities. It is a symbol of the acceptance of the festival as one of expression of local culture rather than a festival of religious ceremonious. It is humorously said that if the Hindus in Trichur decide not to celebrate Pooram for some reason, the Christians will come forward to celebrate it. In fact, the annual calendar starts with the celebration of the Pooram. If there is a wedding in the family, they will decide whether it should be before the Pooram or after the Pooram. So is the case with a house warming ceremony. When it is announced, people ask how long before or after the Pooram the function would be held. One symbol that will not be missed by any participant or spectator of the Pooram is that there is a merging of the essence of the spiritual and the cultural ethos of all communities. 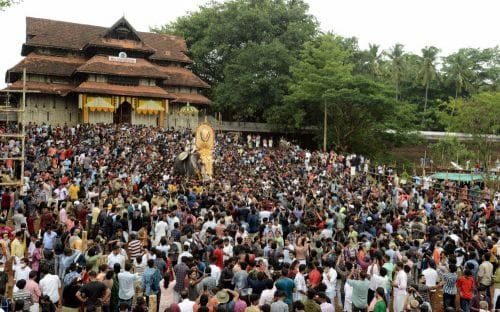 The Pooram is almost a little more than two centuries old. Historically, the Maharaja of Cochin, Rama Varma Thamboran who was popularly known as Sakthan Thamboran had established the Pooram. Though his headquarters was Cochin, he had an attraction for Trichur which he even considered the cultural capital of Kerala. The entire celebration is supposed to have been his brain child.

He built the two temples, the Bhagavathi temple, otherwise known as Vadakanatha temple, on one side of the maidan and the Sri Krishna temple on the opposite side. They are known as Parammekavu side and Thiruvampady side. There are around ten temples situated around these two temples within short distances. Small Poorams begin from these temples and reach the maidan one after the other. The Pooram which begins with flag hoisting and declaration of the opening of the Pooram is done by an elephant pushing open the gates of the Vadakanatha temple with the Kavilamma, Goddess Parvathi, on top of it. Thereafter, it is a collection of lakhs of people who assemble together without ever bothering about what community they belong to.

There are three specific cultural functions that happen one after the other, of course, there are several rituals that are associated with it. Once the temple gate is opened by the elephant, which moves forward to the opposite side and it is supposed that this Goddess on top of the elephant will meet lord Shiva who gets out of the opposite temple in like manner. Both meet together in the middle of the maidan and later return to their own places.

The parasols, decorated umbrellas, on top of fifteen elephants each, on either side, exhibited by either side in competition with lakhs of people in between is an exceptional spectacle of unity of people in togetherness. It is said that even if you drop a handful of sand on any part of the maidan, it will not touch the ground because the people stand very close to each other. The elephants are decorated with a head cover made out of gold coloured sheeting and clothing of the mahout sitting just behind the beginning is also of the gold colour sheeting. An assistant to the mahout on top of the elephant holds the parasol on each of the elephants. As the parasols are brought up by one side, the opposite side also brings up parasols or what is called the decorated umbrellas. This may happen twenty-five to thirty times and it is a great spectacle. This healthy competition between the two sides in bringing up newer and more colourful or of a new shape of parasols is a unique spectacle.

There is the third person on top of the elephant who uses royal fans made in white colour with special feathers. Simultaneously there is also yet another fan woven out of peacock feathers which also will be used for fanning. So, the fifteen elephants on each side; the decorated gold coloured head cover of the elephants that sparkle, the two types of fans, the royal ones and the peacock feather ones; the parasols in different colours which are brought up, folded and sent down just to be replaced by another and the shouting of all the people around in appreciation make the Pooram very loud and colourful.

Meanwhile, there are hundreds of percussionists playing together on what is locally called ‘Chenda’. There are very famous exponents of this musical instrument who are also assisted with different sounds from local flutes called ‘Kombu’ who play for long duration during the Pooram. As they keep beating the drums, people raise their hands in consonance with the rhythm of the beating and one can only see thousands of hands in the air, moving as per the rhythm. Elanjithara Melam, as it is called, is a unique event from the point of view of the fact that they are able to manage the synchronisation of sounds. Thus, colour, sound and shape join together to give the pleasantest sense of participation to the people who crowd around. The state of euphoria and bliss that are created by more than two hundred artists and the sounds that they make inspire people.

Fireworks is a part of Pooram. On the first day of the Pooram, there is a sample fireworks which tells people what will follow on the next day. The bright smile on the face of people and the manifold colours that are brought up by the fireworks complement each other, declaring to the world the humanness of all people on the face of earth. There cannot be better examples of celebrations or events in simple forms to declare on top of the voice the willingness, the declaration and the life of people which unite them beyond caste or religion. That is why Trichur Pooram remains an event to be marked in the calendar by the people of Trichur even when they are away from the city. All their activities will be decided by the fixing of the date of the Pooram because each of them would like to be a part of the Pooram.

Something special in the Pooram is that the organisers do not use any thing of the previous year for a present Pooram. The umbrellas and the fans used in a particular year are never used again. Everything has to be fresh. People of the two sides, who are in friendly competition, start working for making their goods, almost two months earlier. To make the umbrellas, they go to different parts of the country to buy necessary silk.

Interestingly, there are two things that are noteworthy to show how the cultural facet overtakes the religious and unite people together. There is a new pandal that is made anew every year for keeping the elephants when they are not performing. The contract for the making of this pandal this year was given to a Muslim. Also, the contract for fireworks is taken by a Christian. There cannot be better examples of people living together despite their belief in different gods. One earnestly wishes, and also hopes, that this ethos of the Pooram is accepted by all the faithful.

By Sunney Tharappan
Prof Sunney Tharappan, is director of College for Leadership and HRD, Mangaluru. He trains and writes and lives in Mangaluru.
To submit your article / poem / short story to Daijiworld, please email it to news@daijiworld.com mentioning 'Article/poem submission for daijiworld' in the subject line. Please note the following:

Title: A Resplendent Festival as Representation of National Character