The jasmines (mallige) of Shankerpura in Pangla parish (earlier in Mangalore diocese and Dakshina Kannada district and now in Udupi Diocese and Udupi district) have become famous not only in the coastal region of Karnataka but also in Mumbai and other places by the efforts of jasmine growers (farmers) and agents / distributors. In the recent years the jasmine crop of Shankerpura has received Geographic Indication tag. In the commencement, progress and popularity of the jasmine cultivation of Pangla-Shankerpura, there is a story of the foresightedness of a Catholic priest and hard work of the people belonging to the Pangla (Shankerpura) church.

The area in and around Shankerpura was under the jurisdiction of Shirva – Our Lady of Health parish till early decades of twentieth century. In 1922 (November 22), 100 years ago, Pangala parish was formed by carving out from the Shirva parish. There might have been 70 – 80 families back then with 2 wards – namely Pangla and Kurkal. There was utter poverty in the new parish (Pangla) as this area consisted of elevated and hilly landscape and very less low lying areas having water facility. Thus the area consisted of only a few fields suitable for paddy or other crop cultivation. During those years only ten or twelve families had paddy fields at Shankerpura. A few men were working in the coffee estates of Theerthahalli, Koppa etc in Chikkamagaluru and in other districts. Some were helping the fishermen of Kaup in their fishing activities like pulling the fishing nets. A few worked in saw mills. Going to Bombay in search of greener pasture was just begun. There were no other livelihood sources or job opportunities. 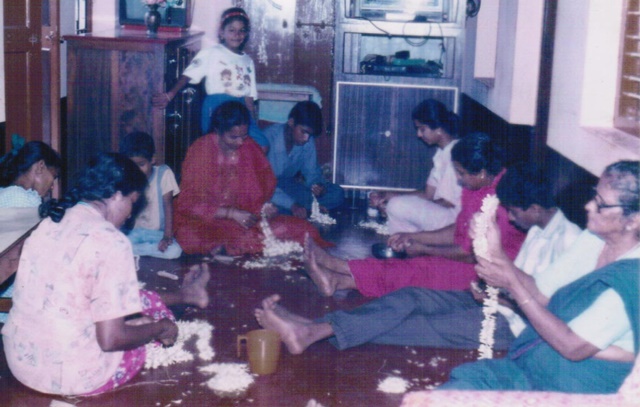 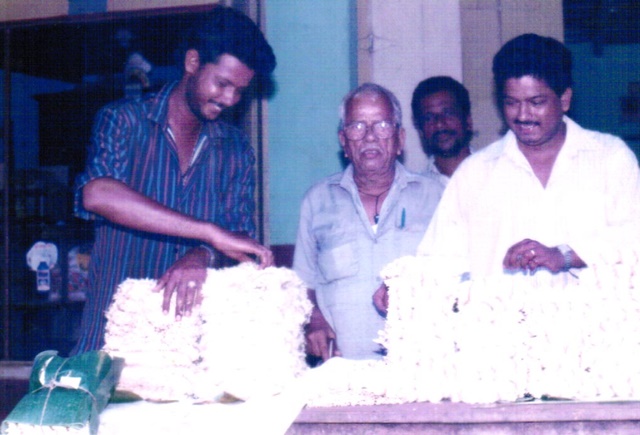 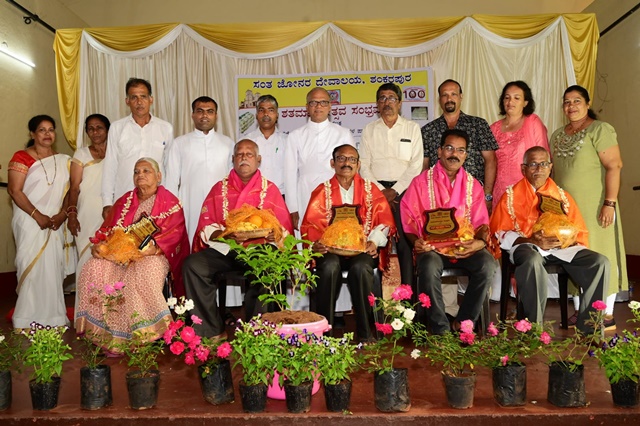 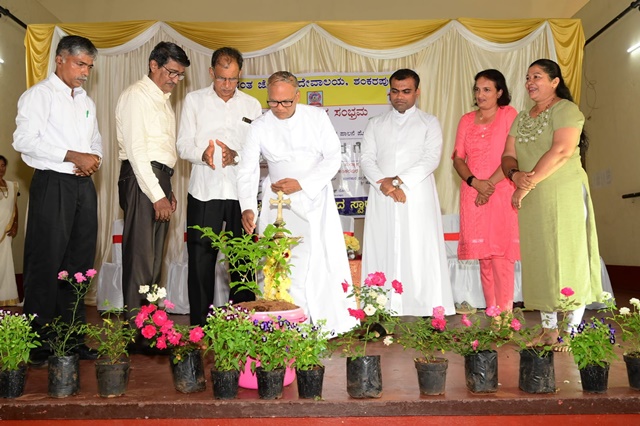 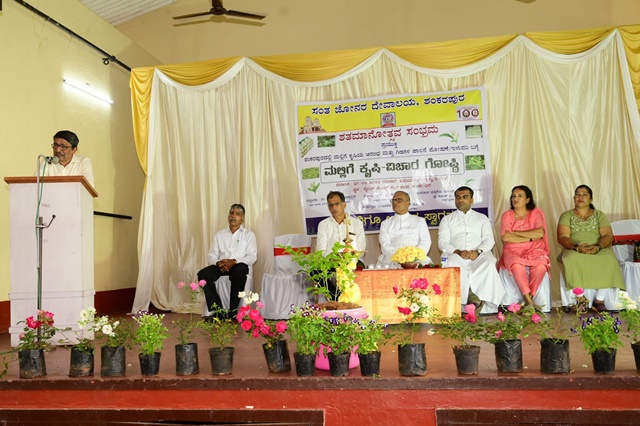 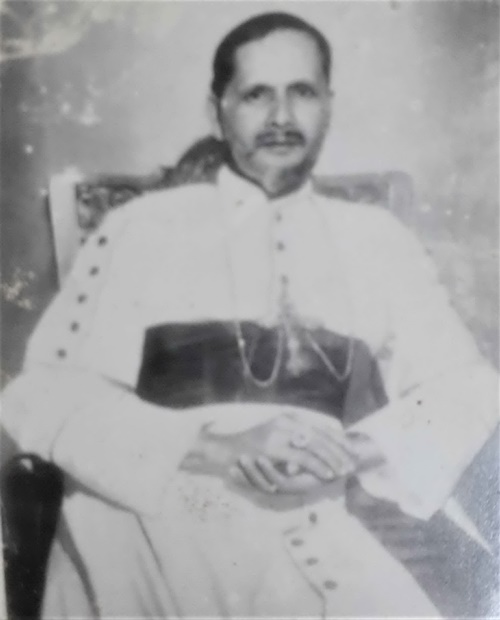 At this juncture of great difficulties a messiah in the person of Fr. Basil Salvadore Peris came to Pangla church as the parish priest in 1934 and served in Pangla for 18 years till he was transferred in 1952 to Bendore parish in Mangalore city (The present Pangla church building was constructed under his leadership). Then he became the Coadjutor Bishop to Bishop Victor Fernandes and he was consecrated as the bishop of Mangalore in 1955. He passed away in 1958 while travelling to Rome by passenger ship.

During those days Sebastian Mendonca (Bosthu Mendos – grandfather of John P Mendonca, the author of this article) was a prominent member of Pangla parish. He was also the gurkar of his ward (St Sebastian) and close to Fr Peres, the parish priest. Fr Peres arranged for the jasmine saplings from Bhatkal and one fine morning he (Fr Peres) asked Bosthu Mendos to bring jasmine saplings from Bhatkal.

To fulfill the wish of parish priest, Bosthu Mendos along with his friends Peter Mathias and Santhan Crasta went to Bhatkal on foot which is 100 kms away from Shankerpura. They were not young but around 50-55 years of age. Each one of them carried 25-30 saplings on their heads and returned. These plants were distributed among close relatives and neighbors and thus started the jasmine cultivation at Pangla-Shankerpura in the mid-1930s.

Later more saplings were produced from these plants and the jasmine cultivation spread to most of the Catholic families.

In the initial years of the jasmine cultivation at Shankerpura, say 1938-39, the jasmine yield was collected from the grower families by youngsters and they used to take them to Udupi town on foot. Later, they made use of bicycles for this purpose. Some youngsters took jasmines to Karkala which is 30 kms away from Shankerpura.

During those days in Bhatkal the jasmines were tied using cotton thread. Such flowers were not liked by Hindu customers for use in religious functions. So plantain (banana) plant thread was being used on the request of those users. Their wish was honoured and by this practice not only jasmine cultivation but also plantain plantation flourished.

Later on as the bus service started in the coastal region the flowers were sent to Mangalore and far off places. After the air travel service was introduced at Mangalore airport at Bajpe flowers were being sent to Bombay and even to Gulf countries.

Jasmine cultivation was the main source of income for the people of Pangla-Shankerpura and surrounding places for couple of decades. Most of the families lived on jasmine income till the Gulf boom started. At the same time, the cultivation spread to many parts of the undivided Dakshina Kannada (Mangalore and Udupi) districts and today it is a huge commercial venture.

(A talk given at jasmine cultivators seminar held at Shankerpura on March 27, 2022 as a part of centenary celebrations of Pangala Parish).

By John P Mendonca
John P Mendonca, now 75, was the 7th rank holder in SSLC (Tenth Standard) in the Karnataka (then Mysore) state in 1963, 2nd rank holder in BE - Metallurgy at Karnataka Regional Engineering College - KREC (now National Institute of Technology Karnataka - NITK) Surathkal, Dakshina Kannada district during its initial years (5th batch) and an engineer of repute. He served in Bangalore, Mysore and Nitte in reputed industries. Now settled at his ancestral house at Shankerpura (Pangla parish) and engaged in jasmine, coconut and other cultivation. John is also a versatile singer, dramatist and an orator. He can be contacted at +91 9845597599 -WA).
To submit your article / poem / short story to Daijiworld, please email it to news@daijiworld.com mentioning 'Article/poem submission for daijiworld' in the subject line. Please note the following: