Leadership is understood as the ability of a superior to influence the behaviour of subordinates and persuade them to follow a particular course of action. Max Weber, a German sociologist wrote about three types of leaderships: Traditional, Bureaucratic and Charismatic. While traditional leadership is derived from the family, bureaucratic from the political authority, charismatic leadership is derived from the self. Charismatic leadership is defined by a leader who uses his or her communication skills, persuasiveness, and charm to influence others. It is characterised by communication, empathy, confidence, humility, self-awareness, maturity, optimism and passion. Mamata Banerjee, Arvind Kejriwal, Asaduddin Owaisi and Navjot Singh Sidhu fit into the above characteristics and thus can be considered the emerging charismatic leaders of India. 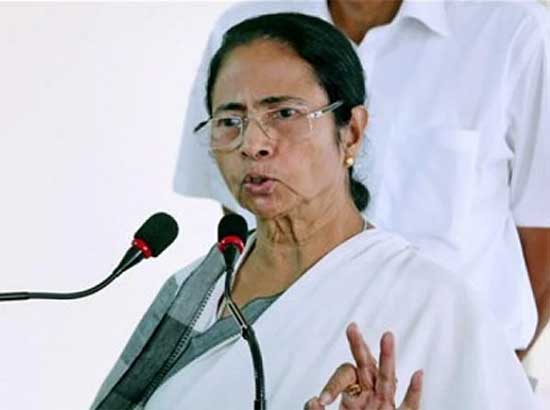 Mamata Banerjee (born 1955) is the current Chief Minister of West Bengal state. She founded the All India Trinamool Congress (AITC or TMC) in 1998 after separating from the Indian National Congress. She is often referred to as Didi (meaning elder sister in Bengali). Banerjee served as Minister of Railways, Minister of Coal, and Minister of Human Resource Development, Youth Affairs and Sports, Women and Child Development in the Indian government. She rose to prominence after opposing the erstwhile land acquisition policies for industrialisation of the Communist government in West Bengal for Special Economic Zones at the cost of agriculturalists and farmers at Singur.

Mamata Banerjee earned her master's degree in Islamic history from the University of Calcutta. This was followed by a degree in education and a degree in law. Banerjee is a self-taught painter and a poet. Throughout her political life, Banerjee has maintained a publicly austere lifestyle, dressing in simple traditional Bengali clothes and avoiding luxuries. In 2012, Time magazine named her as one of the 100 Most Influential People in the World.

In 2021 though her party won a large majority of seats in state assembly elections of West Bengal she lost the Nandigram assembly against BJP's Suvendu Adhikari. Later she won the Bhabanipur by-election by a huge margin of 58,835 votes. With this the strength of TMC rose to 221 seats and that of BJP to 70 in West Bengal Assembly. This saw the end of the Congress party and Communist parties winning no seats. With this many of the people who had left her to join BJP came back and also many eminent people from Congress, BJP, JD(U) and other political parties joined TMC. Former Union Minister Babul Supriyo and Mukul Roy (BJP), Kirti Azad and Ashok Tanwar, Sushmita Dev and Luzinho Faleiro (Congress) Pavan Varma (JD(U)), Tennis player Leander Paes and actress Nafisa Ali are some of the important people who have joined Mamata. Table 1 gives the electoral successes of Mamata Banerjee. 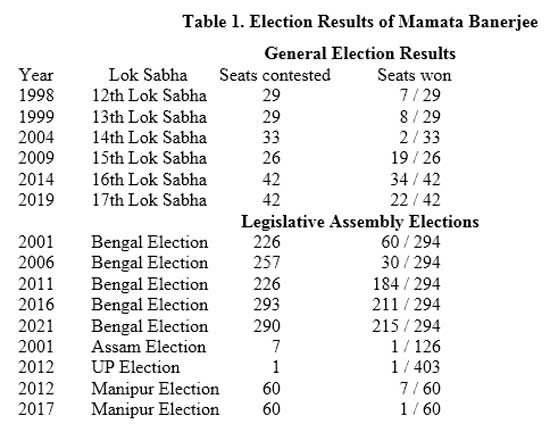 Mamata Banerjee, with her charisma has brought about administrative change in West Bengal removing 34 years leftist regime. By maintaining her humility and setting an example of integrity, honesty and peaceful civil disobedience, with firm belief in Gandhian philosophy and being a firebrand orator, was able to achieve West Bengal's administrative power. She has fasted to show self-sacrifice and commitment to her beliefs. Her charismatic leadership helped her gain followers and enough attention to aid in peacefully ending the leftist rule. In 2021 elections, she has not only opposed the mighty BJP and annihilated the Congress and the left. She has always been a fighter.

TMC supremo, Mamata Banerjee feels she is the only viable alternative to BJP. So, having established firmly in West Bengal she is trying to conquer other states as Uttar Pradesh, Manipur, Goa, Uttarakhand and Himachal Pradesh. Recently, Mamata met Sharad Pawar, NCP leader and Shiv Sena leader Sanjay Raut and Maharashtra chief minister Uddhav Thackeray's son Aditya on Mumbai visit and talked about opposition alliance. With this, she plans to become the key opposition leader. 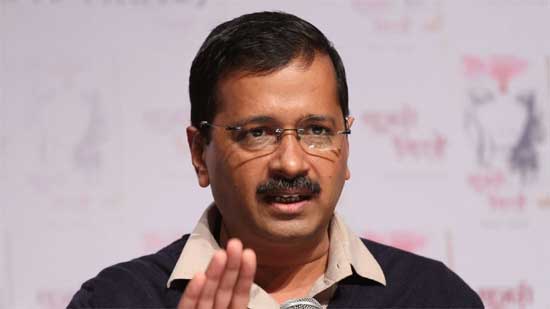 Born in 1968, Arvind Kejriwal is a politician, former bureaucrat and activist who is the current Chief Minister of Delhi. Before joining politics, Kejriwal had worked in the Indian Revenue Service as a Joint Commissioner of Income Tax in New Delhi. Kejriwal is a graduate in mechanical engineering from Indian Institute of Technology (IIT) Kharagpur. He was closely associated with Anna Hazare’s anti-corruption movement which started in 2011. In 2012, he launched the Aam Aadmi Party, which won in the 2013 Delhi Legislative Assembly election. Following the election, he took office as the Chief Minister of Delhi on 28 December 2013.

Kejriwal has become a successful political leader. In November, 2012 he became a ray of hope for voters in Delhi and Kejriwal defeated three-time Chief Minister Sheila Dikshit. Kejriwal is a manipulative, shrewd and ambitious politician. As a result, Kejriwal contested unsuccessfully against Narendra Modi in Varanasi in 2014 elections. However, AAP won 4 Lok Sabha seats in Punjab. Again in 2017, AAP won 20 assembly seats in the Punjab. Again in 2020, AAP won 62 out of 70 seats in Delhi in spite of the stiff opposition from BJP. Table 2 gives the election results of AAP 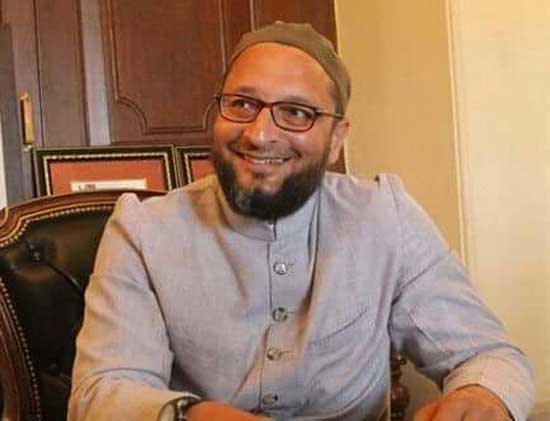 Born in 1969, Asaduddin Owaisi is a politician, who is the President of the All India Majlis-e-Ittehadul Muslimeen. He is a four-time (2004, 2009, 2014 and 2019) Member of Parliament, representing the Hyderabad constituency in Lok Sabha. Owaisi belongs to the Hyderabad-based All-India Majlis-e-Ittehadul Muslimeen (AIMIM) party, of which his father and grandfather have been presidents. Owaisi completed his graduation from Nizam College in Hyderabad. He is a barrister by profession and studied at Lincoln's Inn of London.

Like Mamata Banerjee and Arvind Kejriwal is also spreading his wings. He is often found lambasting the secular parties for their failings and declaring his ambition of forging a social alliance between Muslims and Dalits. In the 2014 Telangana Legislative Assembly elections, the AIMIM won seven seats and received recognition as a 'state party' by the Election Commission of India. In 2019 Lok Sabha elections, AlMIM won two seats, Hyderabad and Aurangabad. The AlMIM performed remarkably well in 2020 in Bihar Assembly elections where the party won five crucial Muslim-dominated constituencies. The election results of AIMIM are given in table 3. 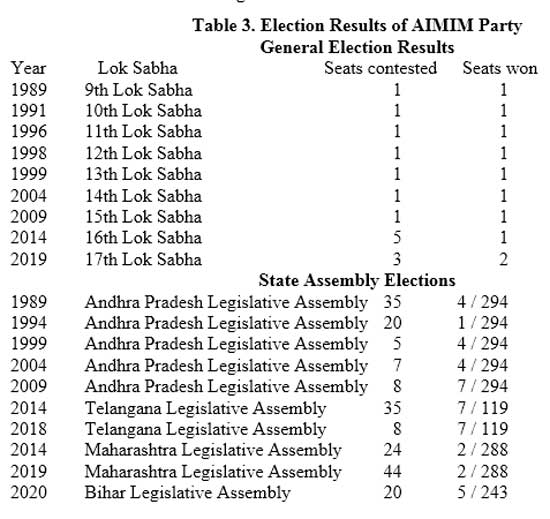 Asaduddin Owaisi has a daring dynamic personality. He is an analytical thinker, capable of great concentration and theoretical insight. Because of his highly creative insight he finds solutions to problems. He also radiates understanding and compassion. Owaisi has a fine sense of justice. He does everything in his power to keep the harmony and is even willing to sacrifice his personal desires for the good of others. Religious polarisation is common in Indian politics. Since BJP is polarising Hindus against the Muslims, Asaduddin Owaisi polarises Muslims against the Hindus often fielding candidates in Muslim dominated areas. 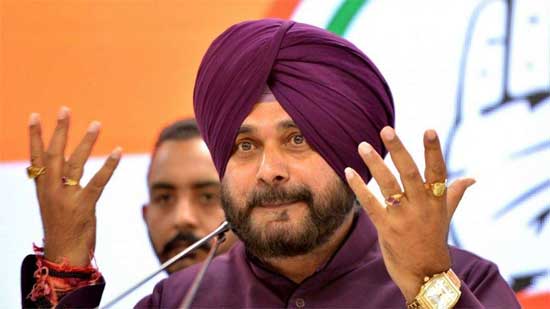 Navjot Singh Sidhu (born in 1963) is a member of the Indian National Congress Party. He started his career as a cricketer, became an entertainer (Kapil Sharma show) and became a politician. At present, he is the President of Punjab Pradesh Congress Committee. Formerly, he was the Minister of Tourism and Cultural Affairs in the local state government of State of Punjab. He started his political career by joining the BJP. Controversy and drama have been two of his hallmarks.

Sidhu burst on the national stage in November 1983, when he made his debut in the Indian cricket team against the mighty West Indies in a Test match played in Ahmedabad. He made his debut in one day internationals in 1987 against formidable Australia in a world cup match in Chennai. Controversy followed Sidhu onto the cricket field also. Even as he garnered cricketing glory, Sidhu found himself an accused in a road rage case in 1988. Retiring from cricket in 1999, Sidhu became a commentator and regaled many with couplets. Soon, he became a key feature on the super hit Kapil Sharma show.

In 2004, Sidhu made his political debut with the BJP and became a Lok Sabha MP from Amritsar. In 2016, Sidhu resigned from the BJP and in 2017, joined the Amarinder Singh-led Congress and also became a minister in his government. Another huge controversy that Sidhu waded in was when he went to Pakistan to attend the swearing in ceremony of the Prime Minister, Imran Khan. It was in Pakistan that Sidhu hugged Pakistan Army chief General Qamar Javed Bajwa, triggering another controversy. In July 2019 Sidhu resigned from the Punjab Cabinet due to the differences with the Chief Minister. With the divide between Sidhu and Captain deepening, in September 2021, Capt. Amarinder Singh had to resign from the post of Chief Minister of Punjab and Charanjit Singh Channi was made the Chief Minister.

Navjot Singh Sidhu has been in the centre of controversies and a master of U-turns. Be in cricket or in politics, there has always been a question mark over Sidhu’s absolute commitment to the team’s cause. He is a flamboyant and outspoken personality. He remains an impulsive and self-centred politician. He's not very seasoned, speaks out of turn, isn't a team player, doesn't weigh his words and is temperamental. Be it cricket, politics or entertainment, his enchanting personality has wooed the Indian audience for years now. He will be a good vote getter for the Congress party. Because of his charisma, he has good chance of becoming the Chief Minister of Punjab and if he proves well, he can also shine at the national level. But the Congress has to handle him with care and understanding.

No doubt, Prime Minister Narendra Modi, Naveen Patnaik, Chief Minister of Orissa and Nitish Kumar, Chief Minister of Bihar are charismatic personalities. But, they are in the process of routinisation of their charisma. On the other hand, Mamata Banerjee, Arvind Kejriwal, Asaduddin Owaisi and Navjot Singh Sidhu are emerging charismatic personalities who have good communicative skills, dynamism and great ambition to become national leaders. While Mamata Banerjee, Arvind Kejriwal and Asaduddin Owaisi in their ambition to spread their wings can cause damage to the Congress party by eating up their vote base, while only Navjot Singh Sidhu can get votes for the Congress but he has to be handled with care. 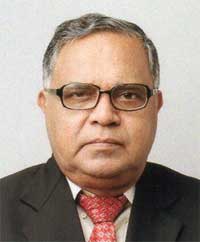 By Dr Richard Pais
Dr Richard Pais is retired Associate Professor and Head of the Department of Sociology, St Aloysius College (Autonomous), Mangaluru. He is the author of 25 books and more than 100 articles which are published in national and international journals. His latest books include Backward Classes and Social Justice, Perspectives on Social Development, Social Inclusion and Development, Sociology of Sanitation and Society and Culture in Karnataka. He can be contacted at: richardpais123@gmail.com
To submit your article / poem / short story to Daijiworld, please email it to news@daijiworld.com mentioning 'Article/poem submission for daijiworld' in the subject line. Please note the following: