The UAE turns 50: A Tribute

This is my United Arab Emirates story…

It was Thursday, the 21st May 1992. As it was the first death anniversary of former Indian Prime Minister Rajiv Gandhi who was assassinated, tension was in the air.Along with this outwardly tension, I had my inwardly health tension as I set out to Mumbai (then Bombay) en route to Abu Dhabi, the capital of the United Arab Emirates to begin my gulf chapter of life. 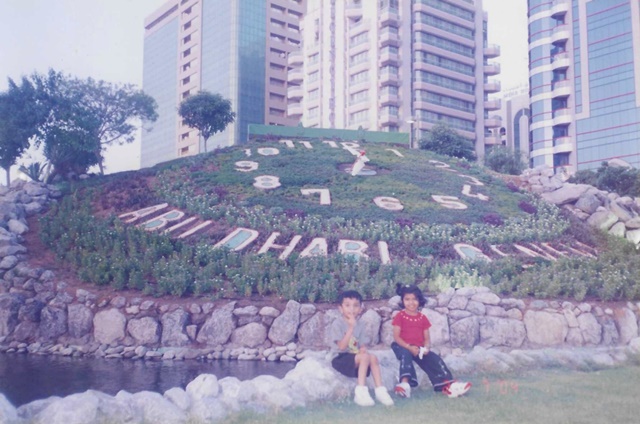 Patrick D’Cunha, my dad’s classmatehad arrangedfor my accountant visa in his Company where he was a Senior Project Manager. With my late dad Robert in tow in Jet Airways, Iflew tothe commercial capital of Indiaand thence, Ihad boarded Gulf Air flight on my onward journey. After a little over three hours, setting foot on an Arab land, my next phase of life had begun. Late Vincent D’Cunha, a long-time employee of the Company and late Sherwin Rebello with his wife were at the Airport to receive me.

While travelling in the Mercedes-Benz with Sherwin at the wheel, it was love at first sight. Love at first sight, not of the German car - but of thecleanliness, the architecture, the clear blue sky, the zero-emission latest automobiles on the wide roads, above all the extensive greenery of the place thatfilled me with awe! 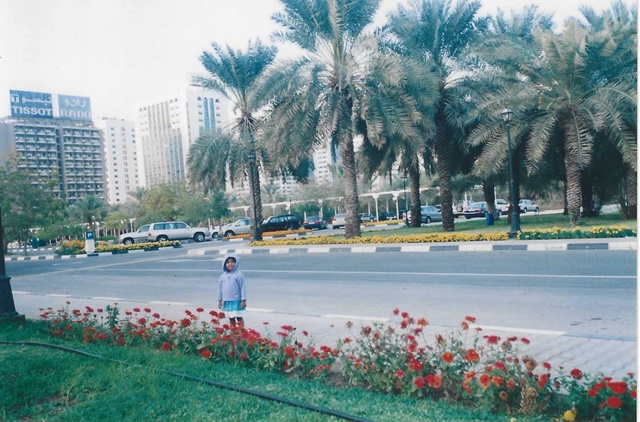 From Coconut Palms to Date Palms: Bidding adieu to the land of Coconut palms, my life was set for a new beginning in a land of Date Palms

‘Quarantine’is a word synonymous with Coronavirus that has been ravaging the world but I experienced it first-hand three decades ago. The internal health tension - I had contracted acute jaundice, as a resulthad to self-quarantine and so was driven straight to the site-office housing, a bit interior from my main accommodation in the city. Here, I was in isolation for three weeks until I declared myself fit after taking the necessary precautions. This is how my Gulf journey began: In Quarantine!

The global Conglomerate ADMAK (MA Kharafi) that I got intowas Egyptian centric and had an Arabic Accounts Division and thus a newly createdcoveted post in the Contracting Company’s Technical Department became my responsibility. But, the long working hours was a bane here, the only thorn amongst the roses and so I made it a mission to look out elsewhere.

Toiling in a Multinational Company without much social time, seeing the moon high up in the night sky while returning, was not the type of life I would want to live. I yearned to live life to the full sans dragging it and this seldom could be achieved in this Organisation.Richard D’Souza, the then ControllerGeneral of Abu Dhabi Department of Finance assured to get me into his Institution, after a word put to him by our family friend Blasius M. D’Souza, then Cabinet Minister forLaw in the State Government. Since nothing was forthcoming even after a couple of years had passed, inspite of a second letter from his good friend Blasius, now Minister for Labour, I put in my efforts and was successful in securing a federal government position in the Central Bank of the country under the Ministry of Finance. With working hours of little over half a day, two day weekend, numerous holidays, immense perks, flexibility galore - this was a perfect job that spurred me to spread my wings. 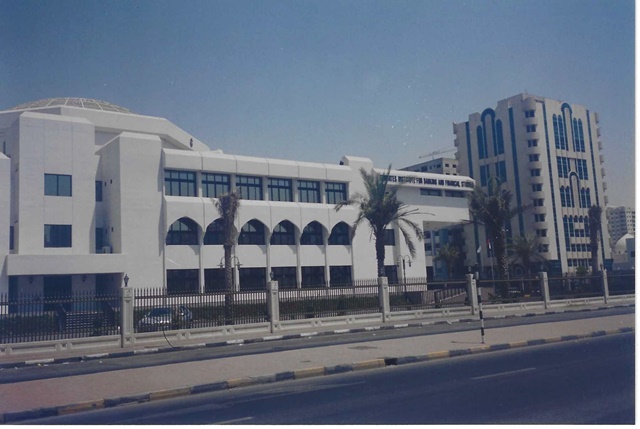 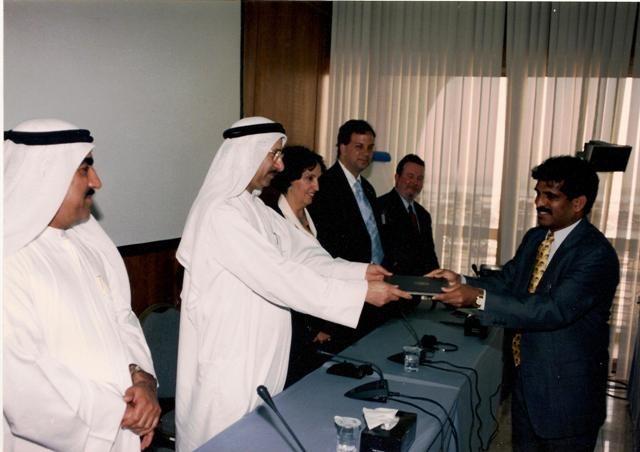 I am of the notion that time wasted is life wasted. Now, with so much free time in hand I was ready to fly. Itaught Catechism for the Communion/Confirmation children in St Joseph’s Cathedral, seat of the Apostolic Vicariate of Arabia for eleven years; My employer granted me permission to pursue other areas of interest -thus coached students preparing for English migration tests IELTS & TOEFL, introduced English language courses for different levels in a leading Training Institute; As a freelancer-designed and edited Newsletters of Organisations that hired me, drafted and narrated for TV commercials, compered corporate gatherings; Associated with ‘The Ecumenical Choral Group’singing for various occasions; Upon a request from my former Egyptian boss Ali Maksoud who was instrumental in giving me release, returned for part-time work in my previous Company; Along with my good friend Noor Al Ameen,launchedaglobal bi-monthly magazine ‘Overseas Indian’for the Indian diaspora. Taking over as its founding ‘Executive Editor’exposed me to the who’s who of Indian community in the Emirates and gave me a unique chance to meet the ‘stars’ visiting the UAE from India without any hurdles. 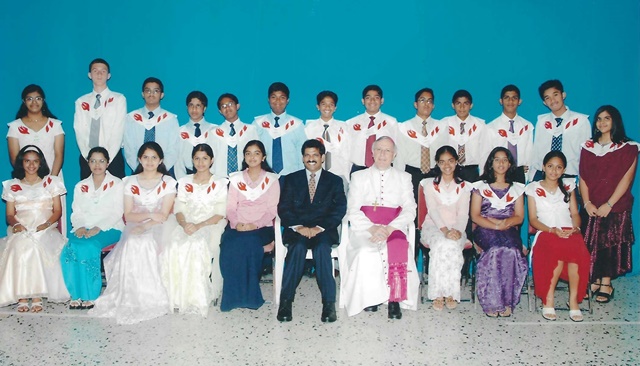 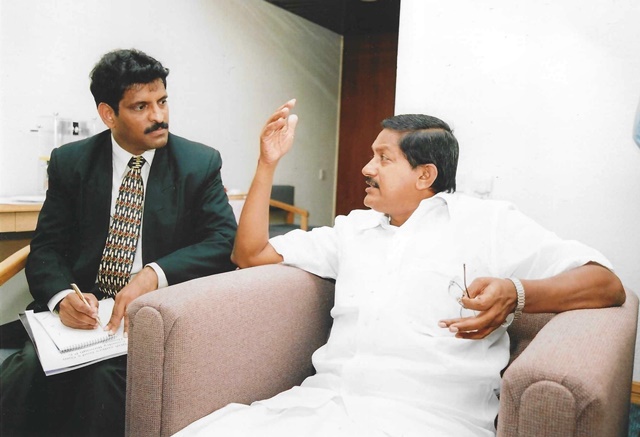 Of Visiting Dignitaries: Conducting an interview with MrPC Thomas, then Union Minister of State for Law & Justicefor ‘Overseas Indian’ Magazine during his visit to the UAE in January 2004.

‘All work and no play makes Jack a dull boy.’ Likewise, life would be monotonous and boringwithout socialising. I formed manycohesivegroups and got intosomelike-minded ones with whose company we roamed the length and breadth of the Emirates and even beyond its borders. We had variety of parties, barbeques with the family group, karaoke with the Filipino group, went for dances with the Goan group, attended Arabic weddings, participated in cultural activities, played cricket tournaments, watched international cricket matches and made merry. Driving the family to Dubai/northern Emirates on a Wednesdayevening only to return on Fridaylate night became a norm on most weekends. 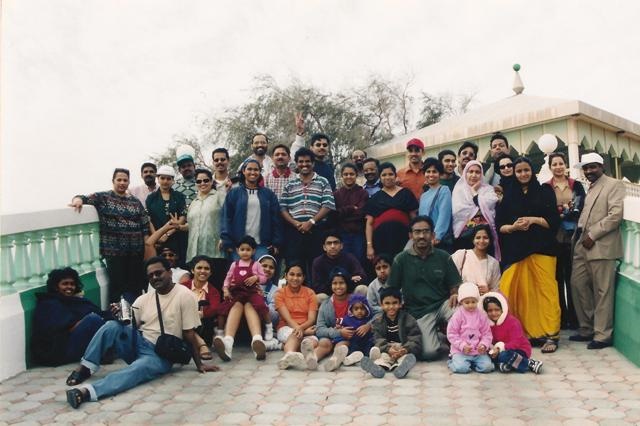 Travel Memories: Half a dozen close-knit groups formed part of our socialising. Pictured is one such group on a trip toSir Baniyas Island in February 2002 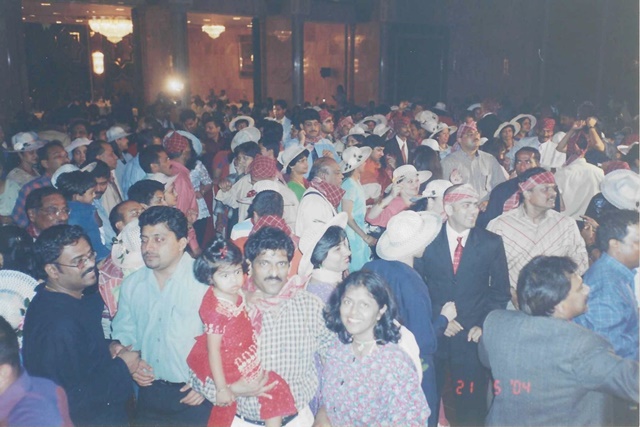 Of Waltz & Jive: A stable/decent job, a few good friends and a bit of leisure time is all that is needed to sway your legsto glory! 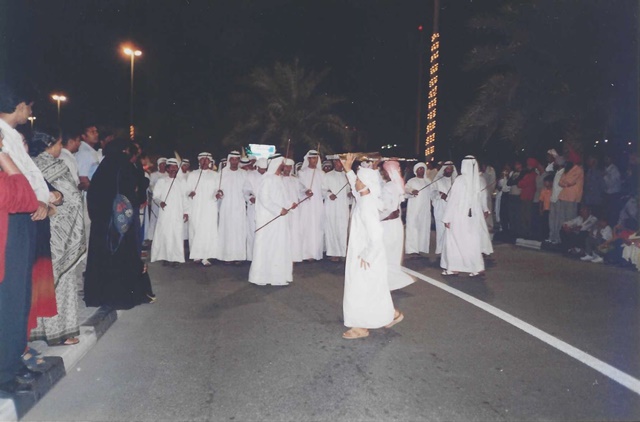 Dubai Shopping Festival (DSF): The annual month long Event in Dubai showcases the beauty of different nations with the motto “One World, One Family, One Festival.” 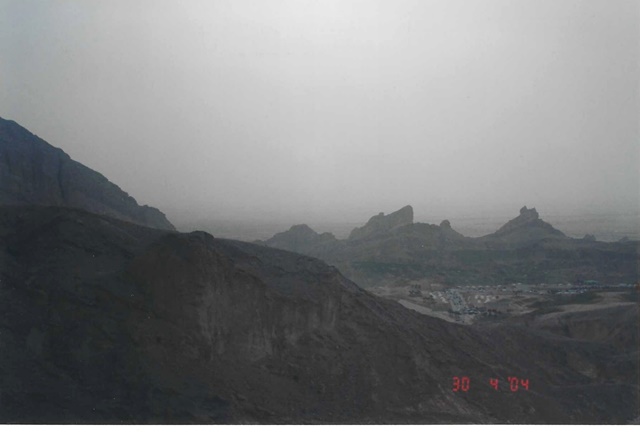 Jebel Hafeet Mountains: Driving to the garden city Al Ain, negotiating 60 bends of the sandstone mountain in an adrenaline-pumping journey was what thrilled me the most.

UAE is one of the very few countries in the Arab/Islamic worldthat is free, fair and a fabulous place to be in. There is no bar in practicing one’s religion or adhering to one’s belief, neither there is a restrictionin openly celebrating one’scustom. Severalethnic, linguistic and cultural Associationsare found in the nook and corner of this nation. The Aloysian/Agnesian Meet, the Wilfy Nite, the Annual Konkan gathering in Umm-Al-Quwain, get-togethers of the Institute of Chartered Accountants of India Abu DhabiChapter - we seldom missed. 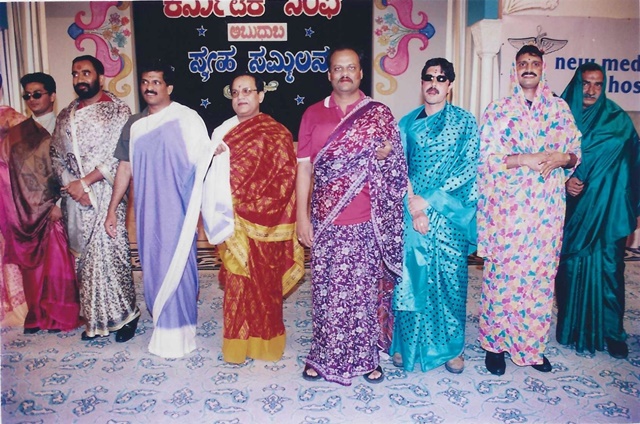 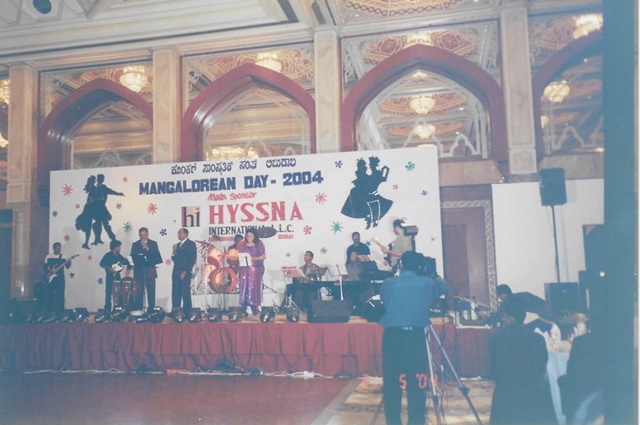 Konkani Cultural Organisation (KCO): The Association in Abu Dhabi representing Mangalurean Catholics,marked its silver jubilee of its establishment in February 2020 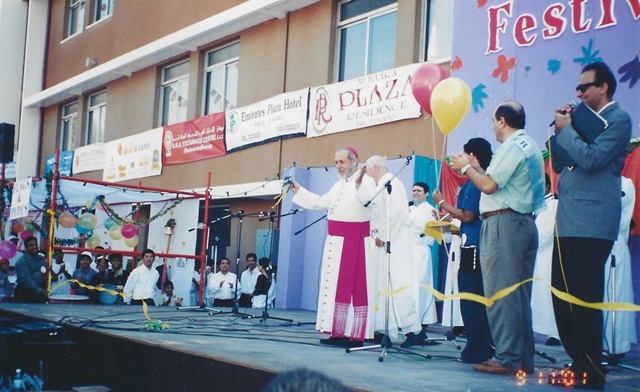 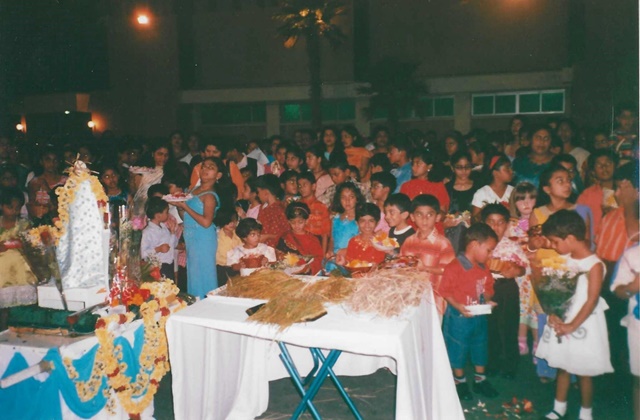 Monthi Fest: The Nativity Feast was celebrated with pomp and gaiety during September with the tiny tots offering flowers to Mother Mary on her birthday

You would be perplexed if I confess the most I miss of the United Arab Emirates in general and Abu Dhabi in particular were the views surrounding our apartment on Al Nasr Street. Abu Dhabi city, sometimes referred to as the Manhattan of the Middle East is a congested island and a concrete jungle. With high rise buildings in close proximity of each other, one cannot help peepingintosomeone else’s bedroom or kitchen. The location of our apartment was an exception that was encircled with heritage, culture, architecture, religionand natural beauty in one setting.

From our flat,it was 24/7 triple view- Etisalat branch building, Abu Dhabi Cultural Foundation and Al Hosn Palace. The dome of Etisalat branch, the telecommunications service provider mesmerised during the day and glittered at night with miniature lights. The head office edificewith a catchy dome adjacent was nearing completion as we left; The Abu Dhabi Cultural Foundation abuzz with activities all through the year also housed a huge library. An evening walk within the serene premises, spending time gazing at the colourful water fountain as the sun set was a sublimeend to our day; Next to the Cultural Foundation, lay the most significant building Al Hosn Palace, over a couple of centuries old, that was maintained to perfection. Foreign tourists alighting from their buses, paying a visit to what was once home to the Emirates ruling Al Nahyan family was a treat to watch.

On the opposite side of our apartment building was the gigantic fresh fish, meat, fruit and vegetable market built in an Arabic Architectural design that looked like a Palace and confused a first time visitor. The Islamic call for prayer – azan/adhan that emanated from the minarets of the Mosquenext to the market overseeing the Arabian Sea echoed as the cool breeze blew from the Arabian shores. 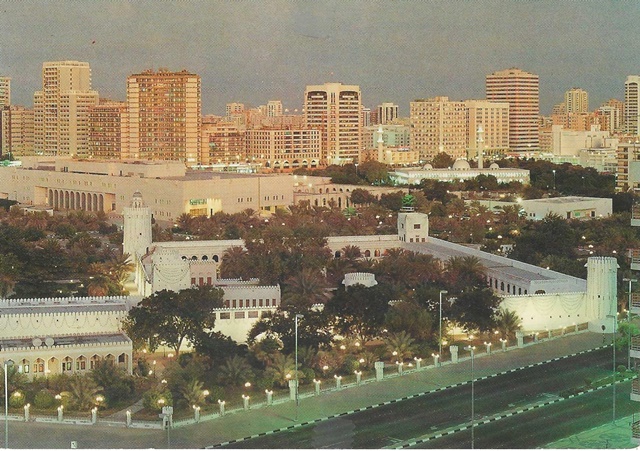 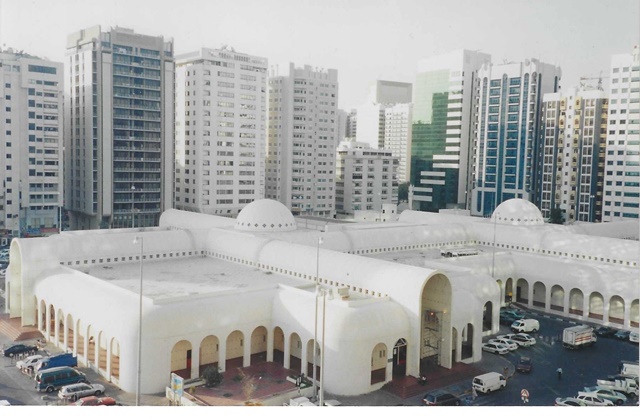 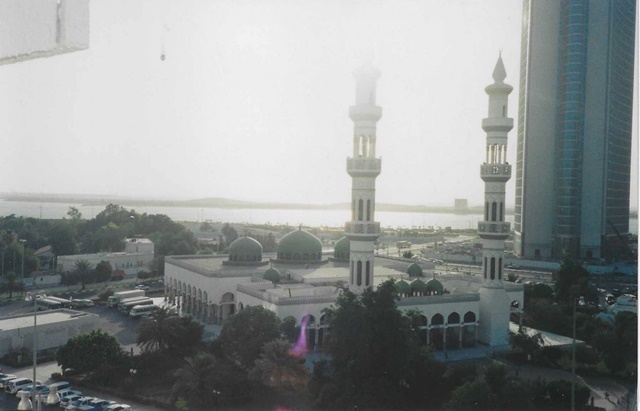 There are numerousthings that I relishof the time I spent in the United Arab Emirates. I got married. My two girls were born here. I learnt Arabic. I gainedprofessional qualifications.I served as the first Co-Chair and later the Chair of American Institute ACAMS Middle East Chapter’s Executive Board.I had my sisters settled, brought into the country a few former staff of my dad’s Consulting Engineering firm and hosted many on visits. All the same, it wasnota bed of roses. I felt like I earned a doctorate in driving after it took me 16 attempts spanning 5 years to lay my hand on that important plastic. Mineral water as the drinking water took its toll as I sufferedfrom kidney stones. The desalinated sea water used for showermade me bald, well almost!I faced discrimination.There were many other challenges but speaking for myself - overall the positives far outweighed the negatives.

Whoever passed this blessed land, for what they are today …
Some making a fortune, othersearning their bread anyway;
Stimulating economy with remittances, sparkling lives of dependants,
Like the glow of a candle in the dark, light shone in abundance.

As millions of colourful bulbsilluminateon its 50th Anniversary of formation
A prayer for a progressive nation that has transformed a generation!

I believe one’s life is pre-written and we just pass that way, making adjustments all along our wired journey. My ‘Plan A’ did not materialise, ‘Plan B’ did not even take off and this invisible ‘Plan C’ led me to the United Arab Emirates. My sincere gratitude to the gentlemen mentioned in this piece of writing for having made my journey colourful. I am indebted to the country and it was with much pride I called this land my second home for over fifteen years until 26th August 2006, the day I bid farewell. I do not believe in re-birth, thus I would endeavour with the years ‘still blessed with’ to visit this part of the Arabian Gulf often just as I did in December 2015 and fell in love with it all over again.

On behalf of millions who have found succour, having made a living in the Emirates golden sands and still are – Best Wishes to the country on its National Day: the 2nd of December, commemorating its Golden Jubilee of formation as a Federation! 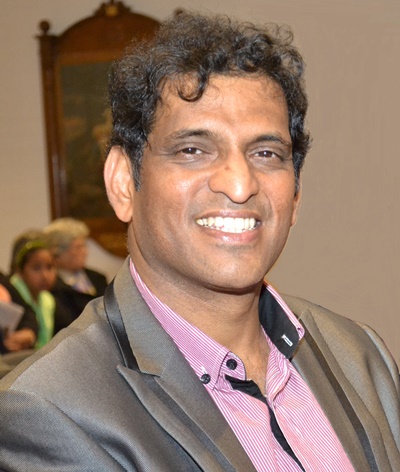 By Stephen P D’Souza
To submit your article / poem / short story to Daijiworld, please email it to news@daijiworld.com mentioning 'Article/poem submission for daijiworld' in the subject line. Please note the following:

Title: The UAE turns 50: A Tribute