Indra Nooyi: A Daughter-in-law of Mangaluru

Around 2006, when Indra Nooyi took over as the CEO and Chairperson of the Pepsi-Co., one of the 50 largest companies of the world, I was a little intrigued to note her family name “Nooyi”. I tried to get a few more details about this draper business executive with an ever smiling baby face and learnt that she was a Tamilian born from Chennai and a few years younger to me.

I also separately learnt that there was a small village by name Nooyi near Gurpur. But I didn’t persist in establishing any connection between the two, may be due to lack of enthusiasm or just forgot! 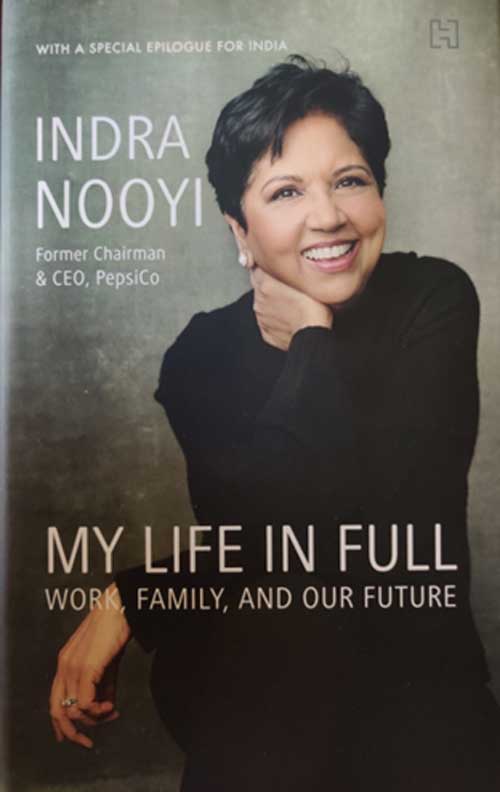 In January 2020, when we were driving to Mangaluru to attend the roce of my nephew, because of the curfew restrictions, we were forced to take a deviation from B C Road via Gurpur-Kaikamba to reach Kulshekar. Just about 2-3 kilometers before reaching Kaikambha, I noticed the village name “Nooyi” mentioned in the roadside signboards.

Then it suddenly jolted my memory and I remembered Indra Nooyi, the successful and celebrated CEO of Pepsi-Co as also a Padmabhushan Awardee! Yet, I didn’t persist with my curiosity and quietly forgot about my hunches.

And now, in October 2021, I have in front of me a copy of her autobiography “Indra Nooyi: My Life in Full”, published by Hachette, India, 2021 which has confirmed that my hunches were right! Indeed, the family name Nooyi is actually derived from the village name Nooyi of Gurpur-Kaikamba.

Let me explain: Indra was born in Madras (Chennai) on October 28, 1955 as the second daughter of Shantha and Krishnamurthy, a Tamil Brahmin middle class traditional family. She was educated at the Little Angels Convent School (1958-1970) and Madras Christian College (1971-1974) and did her 2 year post graduate management diploma at IIM, Calcutta (Kolkata) during 1974 -1976. After working briefly at Mettitur Beardsell Textile Mills, Tamil Nadu and Johnson & Johnson, Mumbai, She moved to U.S.A and earned Master’s degree in Public and Private Management from Yale School of Management in 1980.

On completion of her studies from Yale University she stayed back in U.S.A and worked in reputed companies like Boston Consulting Group, Motorola and ASEAN Brown Boveri in different but significant positions and joined Pepsi-Co on 30th March 1994.

Through dedication and loyalty to her company she put in energy, enthusiasm and hard work (she slept only 4 -5 hours a day) into her assigned tasks and quickly and systematically rose to higher positions in the Pepsi-Co like Corporate Strategist, President, Chief Finance Officer and finally was appointed as Chairperson and Chief Executive Officer (C.E.0) in 2006.

Early in her journey of progressional advancement i.e. in 1981 itself, she met a young engineer from Mangalore, Raj Nooyi, son of Leela and N.S.Rao, and fell in love with him. After the consent of both the families got married and became Indra Nooyi. Parents and a few close relatives from both Kannada and Tamil sides attended the ceremony which was held on the basement hall of Dr. Ramesh Adiga uncle of Raj at Flossmoor, Illinois.

Though the families belonged to two different ethnic and language communities, they whole-heartedly supported and blessed the young couple and remained a source of strength to the young bride, Indra in her rapid advancement in the corporate world.

Though himself an engineer and a postgraduate degree holder from University of Texas gainfully employed in reputed firms, Raj helped her in her career, even sometimes, making adjustments in his own career path. Unlike the typical Indian families, Indra’s in-laws were insistent that she continued to work even after the marriage. To put it in her own words: Raj’s father, N.S Rao, said directly to me “Indra, don’t give up your job. You have this education and you should use it. We will support you in any way you can”. (page 24 of her book).

But she also attributes her success to the cultural inputs and education she got in her younger days in India and the inspiration she got from her teachers:

“The teachers, including nuns who had ventured from Ireland to India to spend their lives devoted to God and education, were warm and formidable. They were also inescapable: dressed in habits with wimples around their chins, Sr Nessan, the headmistress, and Sr Benedict, who led the nursery school, were always walking the corridors. They also regularly stopped by our house to sip coffee and chat with my grandfather or my parents (page 19).

She further writes: “In my won orbit, female teachers, school administrators and nuns – Sr Nessan, Sr Benedict, Miss Nigli, Miss Peace, Miss Meenakshi, Miss Saraswathi and Mrs Jobard and the rest- had showed me what it was to be an educated , working woman ( page 42).

In her book, she also recalls the interest shown and help extended by her grandfather, Thatha Shastri and her parents in laying a solid cultural foundation to her personality. She had studied Carnatic music, classical dancing, debating and even dabbled in western rock music. “Then, with two more friends Jyothi and Hena, Mary and I formed a band for the school variety show. The nuns billed us the “Log Rhythms” after the math tables we were studying” (Page 24).

She also describes the middle class values of an ordinary, but educated, Indian family of Chennai of her days. “He (my father) told me he never wanted me to have to put my hand out and ask for money from anyone other than my parents” (page 10). “Our life was predictable, our primary job was to study and get good grades. But..... I had evening tasks too- putting away the dishes, grinding pea berry coffee beans in a two-handed manual mill for the adults’ warm drinks in the morning, or toughest of them all, churning the buttermilk in the old manual way to separate the butter. It was tedious and chafed our palms” (page 16). “Before we slept, we had to say our prayers loudly so that my mother could hear them - the Lord’s Prayer, which we also recited at school and then a couple of Sanskrit prayers (page 15).

With such a sound personal background and unique value system and with full functional autonomy vested in the position of Chairperson and CEO, Indra Nooyi took charge on 2nd October, 2006 and strived hard for a record long period of 12 years to transform Pepsi-Co into an unique and responsible business conglomeration, out of the alleged “Junk food company”. As Pepsi-Co was operating in more than 180 countries with a large range of products from cold drinks, aerated waters, Quaker Oats, Tropicana Juices, K.F.C, Pizza Hut etc., etc., it was accused of spoiling the world environment by wasting water and dumping plastic packages and wrappers; spoiling health of the people because of sugar, fat and salt contents in its products and so on.

Indira Nooyi faced these challenges head-on. She not only had to see that the interests of the stakeholders were safeguarded by maximizing profits and earnings for them, but also to safeguard public health and environmental sustainability. In spite of the world financial crisis of 2008, Pepsi-Co maintained its profitability. Shareholder returns during her tenure of 12 years totaled 149%. “The company returned more than $79 million in cash to shareholders with dividends alone growing by 10% every year. Market capitalization rose by $57 billion in those 12 years, more than the gross domestic product of many countries. Net revenue jumped 80% to $64 billion in 2018” (page 255).
In spite of these financial achievements, sometimes shareholders and experts were very critical of her for the initiatives taken by her to deal with global public health and environmental issues. As she has sarcastically put it:” The most memorable comment came from a portfolio manager in Boston. “Who do you do think you are? He asked me: “Mother Theresa?” (page 208).

Yet she had persisted with her convictions “I decided the way forward was to rethink the company under the umbrella Performance with Purpose... we would deliver excellent performance, as was expected for Pepsi-Co, but would add three imperatives to our work ahead: nourish humanity and the communities in which we live, replenish our environment and cherish the people in our company” (page 203).

And, I feel she had succeeded in achieving her objectives and the world has taken note off it.

If financial remuneration received per year is the measuring rod of one’s success, then I have the figures for the year 2014: CEO of Pepsi-Co, Indra Nooyi, earned a remuneration of 19 million dollars (more than Rs 100 crore) including $5.5 million equity that year. As CEO she had the exclusive use of a company jet with fully equipped office in the air. We can only imagine her total earnings in life and her personal worth!

She is awarded honorary doctorate degrees by eleven reputed American Universities and the Government of India honoured her with Padmabhushan in 2007.

Yet a Family Person

True to her Indian ethos, she has remained a family woman throughout her life. Her first priority has always been her husband Raj and her two daughters: Preetha and Tara. When they discovered that Preetha was discriminated at her North Street Public School in the wealthy suburb of Greenwich because of her colour and ethnicity, they were devastated and both she and Raj wept.

“We knew we had to make a quick move. We called Sacred Heart, the Catholic girls’ school in Greenwich and spoke to the Principal, Sr Joan Magnetti. Two days later, Preetha was enrolled and in class. Between Preetha and Tara, I was a Sacred Heart parent for the next eighteen years. Giving the commencement speech at Tara’s graduation in 2011 was one of the most emotional moments of life” (page 123).

In the epilogue of her book, she writes: “I departed India forty three years ago, but India has never never left me. I am still a vegetarian; I have a puja alcove in my house here I light my lamp every day” (page 300).

After retirement from Pepsi-Co, Indra Nooyi is equally busy along with Raj in giving “back to the society”. They have opened a full time office for their philanthropical activities. Indra serves on the boards of Amazon, Philips and International Cricket Council and is Co-Director of the Connecticut Economic Resource Centre. She is the biggest alumni donor to Yale School of Management and has endowed a deanship there. The science labs of both her alma maters, Holy Angels School and Madras Christian College were rebuilt and a new women’s lounge added to M.C.C to cater to girl students.

Raj has joined as Interim C.E.O of PLAN International, a global child rights and humanitarian organization active in 75 countries and helping 500 million children worldwide. Along with Indra, he has endowed Nooyi Distinguished Chair of Bio-Engineering at University of Texas, Arlington.

And what advise she wants to give to Indians?

“Most importantly men and women in the country must join forces to create a more inclusive, more productive, more caring nation. Only then will India be truly on the road to sustainable prosperity” (page 303).

I hope Mangalureans will heed the advice of their internationally acclaimed daughter-in- law, especially these days when their leaders- sons and daughters, are busy polarising the local community by making false allegations against the Christian institutions of spoiling the Indian society. 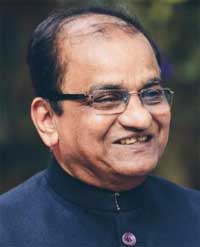 By Joe W Lobo, Kulshekar
Joe W Lobo is an author and convener, Ballal Durga Society 2020. He had served in Indian Council for Cultural Relations, Ministry of External Affairs, government of India, for 30 years and retired as director. He was also director (International Office), Christ University.
To submit your article / poem / short story to Daijiworld, please email it to news@daijiworld.com mentioning 'Article/poem submission for daijiworld' in the subject line. Please note the following: