There are some people who were simply born to serve others. They were born to be the kind of person that could cross your life in a swift junction and sweep you away in their profound legacy. There is an aura of warmth, an invitation that lingers in the air like a steaming cup of tea on a rainy morning.

Fr Joe Mary Lobo was one of those people, which is a rare thing to say because these people do not come by often. I had the pleasure of volunteering at Sri Christa Sharan School, an establishment conceived and nurtured by him and a fantastic team of principals and teachers for years. It was blatantly obvious that he was the beating heart of the quaint, Spanish-style school. Sometimes, in the mornings, I would be greeted by mangoes and jam on toast with a side of his familiar grin. He would read the paper, pages rustling under the oscillating fan, and would ask me: “When will your teeth be freed from jail?” as a way to poke fun at my braces. I would shake my head and laugh, sipping on fresh coffee as he aligned his next joke. 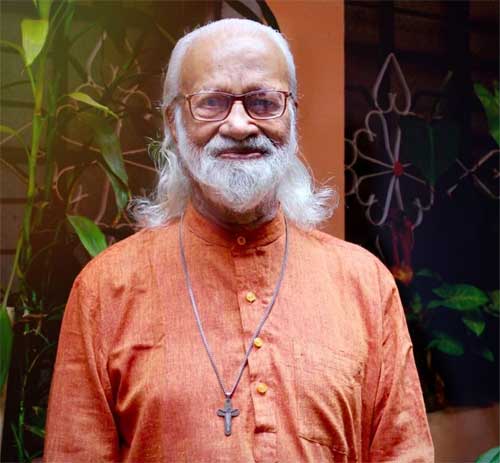 As I prepared myself to teach classes for the day, I would watch him wait for the bustling children to pour into the sun-filled courtyard. He stood in his usual patient stature, wearing orange or salmon toned linens with his long white hair slicked back with water and a wooden comb. As I watched from the terrace above, pink, and black uniformed children would approach him for a blessing, hands joined, as he placed his own hands on their head. He continued as the children ordered themselves into neat single-filed lines, like rows of vegetation on a farm, his calming presence cutting through the morning chaos prefacing the national anthem and recitation of prayer.

Prayer was important to Guruji, in a meditative, grateful way, rather than our selfish ways of constantly demanding for things. It is always that we turn to God when we need something, we use Him as a crutch for when life seems to veer even the slightest bit out of the rigid trajectory we painstakingly build. Guruji was always praying, which, to me, I could never quite grasp. I still cannot––how can one person be so devoted to a spiritual force in which they cannot hold, but must instead rely on the strength of their faith? I never asked him then, and now that he has passed, I don’t think I ever will find the answer. He led prayer every morning, mass on Sundays, and of course, mass every evening at five. A few members of staff, the twelve children who boarded, and I, the guest, would sit cross legged on the carpeted floor of the tiny chapel at the school. It was the oldest part of the building, the most authentic piece of which still remains. I would often think about what prayers the chapel walls might have heard in their time. They appeared faded with the kind of wisdom only attainable with age.

We have the same birthday, Guruji and I, and I found this out during one of our evening walks at the train station. We strolled to the end of the platform and back, often in complete silence, passing families who congregated on the pavement as they waited for their train to arrive. We truly never spoke, except for the one time he recounted the day in which India gained independence from the British in 1947. “My memory often fails me,” he would remark, “I am afraid I cannot tell you all the details.” I told him that this is alright, that I cared more about his perspective than the facts. I don’t think he heard me––sometimes you’d need to yell a bit to get his attention––because he seemed to absentmindedly continue on. His wooden cane set the walking pace and would sometimes––when I clumsily failed to pay attention––block my path to warn me of a pothole or a small piece of trash that I was instructed to pick up and dispose of.

Official names title him as Founder and President of the Sri Christa Sharan Social Development Society and Sri Guru Sharan Charitable Trust. Though, the community in Birur fondly remember him as Guruji––a selfless man of service with the kindest eyes framed in brown eyeglasses. One who saw the problems around him and strived to fix them; because I think he knew that to get rid of one’s troubles, there is nothing like action. Clean up, take a breath, and carry on.

By Meghan Pereira
Meghan Pereira is perusing her 2nd year Bachelor’s majoring in Economics and Political Science in McGill University, Montreal-Canada.
To submit your article / poem / short story to Daijiworld, please email it to news@daijiworld.com mentioning 'Article/poem submission for daijiworld' in the subject line. Please note the following: