It completes 46 years from the date of declaration of the Emergency in 1975 by Indira Gandhi, the then Prime Minister (PM) of India. At this juncture it’s important to remember some heroic actions of one man who did not lose hope in retrieving the suspended Democracy. Almost everybody had lost the hope of getting the Democracy back in India, but some brave hearts had fought back with great courage. One such Brave heart was Dr Subramanian Swamy.

Even though the reason for declaration of Emergency was stated as “to control Internal Disturbances and the threats to India”, the actual reason stands out different. There were several instances which made the then PM Mrs. Gandhi to be insecure of her position. Initially started with “Navnirman Movement” during December 1973, as a protest against school fees hike and grew up to dismissal of State government Assembly due to the Corruption in Gujarat. Gandhi who had refused to dismiss the State Government for its corruption charges, was forced to implement President’s rule in March 1975 because of fast unto death by Morarji Desai. Later in March 1974, a similar movement had been launched by the famous freedom fighter Jayaprakash Narayan which was called as ‘The JP Movement’ had erupted similar kind of protests in Bihar. Another such protest during this period was the Railway Protest led by George Fernandes, due to which transportation of people and goods through railways was onerous. In spite of these movements there was another main threat which forced Gandhi to declare the Emergency. 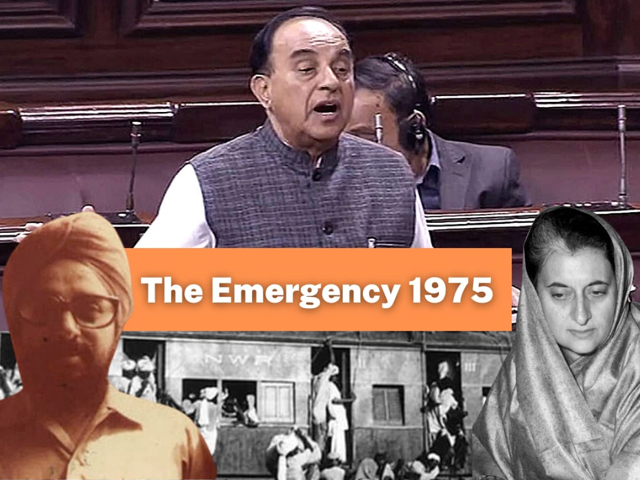 Raj Narain who had lost to Gandhi from Raebareli Constituency in the general elections had filed a petition in the Allahabad High Court, accusing the PM that she spent more money than the Election Commission had allowed then and the government officials were used in the Campaign. Under this petition on June 12, 1975, the Allahabad High Court declared Gandhi’s election to the Parliament as Null and Void, further gave 20 days to appeal in the Supreme Court. On June 24, Supreme Court had imposed a conditional stay on the order of High Court allowing Gandhi to attend Parliament, but the voting power was taken off. This led to some senior leaders of Congress come to the opinion that her resignation would be an advantage to the Party. These were some of the reasons which forced Gandhi to declare the Emergency which ended up for 21 months.

Dr Subramanian Swamy who was a strong critic of Indira Gandhi and the Economic Policies adopted by her government back then, was also the target of her atrocities during the Emergency. Early morning on the 25th June, 1975, Swamy got the news of arrest of K. R. Malkani, editor of ‘Motherland’ Newspaper through his wife and got a call from SHO confirming his availability. Taking this as a hint Dr Swamy leaves to his friend’s house and escaped from the Police who had come to detain him. The impact of Emergency was too harsh that Fundamental rights were taken off, and all the activities were controlled by the government.

In the initial days of Emergency, Dr Swamy disguised as Sardar and driver of Nanaji Deshmukh who had disguised as Businessman. During this time, Swamy got to know the strength of RSS which was successful in organising underground campaigns, distribution of newsletters and educating the people on evil intentions of Gandhi behind the Emergency. Dr Swamy had travelled to several places with help of RSS. He even went to Gujarat where Narendra Modi received him and accompanied him to visit Jan Sangh leader Makrand Desai. The people who opposed the emergency and the opposition party were jailed. This continued for some months, later Nanaji was arrested and kept in Tihar jail for rest of the Emergency. Nanaji passed a secret message through underground RSS Karyakartas to Dr Swamy to leave India, go to US and spread the truth about the Emergency Internationally as Gandhi was more concerned of International Image.

Dr Swamy travelled almost all parts of US educating about the problems faced by the Indians in the Emergency and arrest of well-known leaders by Gandhi Government. Even then this did not bother Gandhi and there were no signs of lifting off the declared emergency. Instead, she started harassing his family with all the powers she had. So, Dr Swamy had an adventurous plan to return to India, as he was Member of Parliament, to keep his membership alive one should be present at least once in 6 months. Dr Swamy had well planned strategy to return to India, enter Parliament and escape without being caught by the Police.

One of the problems back then was names of people coming to India through flight had to be updated with Indian Government, if Dr Swamy had booked a ticket to India, he would have been caught by the police as he landed in India. But Dr Swamy had booked a ticket to Bangkok, which en route stops in India and he lands in India. Thereafter he comes to his own house in the disguise of a TV repairer to save himself from the Police who had put as surveillance in Dr Swamy’s residence. After some days as per the pre-planned strategy Dr Swamy had to enter the Parliament.

Dr Subramanian Swamy without any disguise enters the Parliament where a Policeman gets surprised by seeing him. Even though he had to arrest him, there was no arrest warrant handy, so he had to call the Police Station to confirm on status of the Warrant, his effort did not bear any fruit. Dr Swamy enters with his colleague Indrajeet Gupta. While Dr Swamy entered the Parliament Vice President Jatti was reading out the obituaries. Dr Swamy immediately raised a point of order, asks Chairman to include the Democracy in the list of Obituaries, which also died. But Chairman refuses to take a point of order, in protest of which Dr Swamy walks out of Parliament. His presence in Parliament had stunned all the members in the Parliament. As soon as he came out of Parliament Dr Swamy was successful in getting train to Mathura and going underground.

The courageous act of Dr Swamy made him famous internationally. This made Gandhi more intense to catch Swamy. He stayed underground with help of RSS and Madhav Rao Mule at Bombay and Pune for 3 months. Gandhi had forced some of the Jan Sangha leaders like Atal Bihari Vajpayee, S M Joshi and Nana Ghore to sign the Twenty Point Programme. But there was need of Dr Swamy to sign it, Vajpayee had insisted Swamy to surrender and sign the programme, But Madhav Rao Mule refused to do so. Madhav Rao insists Dr Swamy to leave India as the search for him was intensified by Gandhi.

Now, Dr Swamy had to plan for leaving India. Through RSS networks he asks for help from his student and King of Nepal, King Veerendra. But he asks Dr Swamy to pass the Indian Border, so that he can help further in travelling to US, if there is any information of supporting Dr Swamy by King Veerendra is leaked Gandhi may declare war against Nepal. With the help of RSS, Dr Swamy was successful in crossing the Border and reaching the Nepal where the vehicle was kept ready for him to drive to the nearest airport, from where he reached Kathmandu and visited his student King Veerendra. From there Dr Swamy flew back to US and was successful in his adventurous journey. This thriller Entry and Escape from Parliament deranged Gandhi and was a morale builder among the people of India. By this heroic act of Dr Swamy, Gandhi had come to know that people will not take the Emergency for long, hence she dissolves the Parliament and elections were announced in March 1977 and the Democracy stood up again in the Republic of India.

By Gurudath Shetty Karkala
To submit your article / poem / short story to Daijiworld, please email it to news@daijiworld.com mentioning 'Article/poem submission for daijiworld' in the subject line. Please note the following: