Do you Have Difficulty in SWALLOWING???

Every year, the month of June is observed as “Dysphagia awareness” month. In this regard, the Department of Speech and Hearing at the Father Muller College brings the awareness on Dysphagia to the masses which may help in early identification, assessment and prompt management of the disorder. 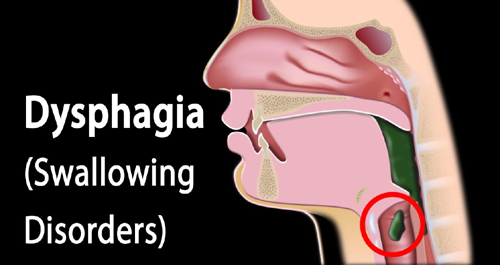 The disorder of swallowing is commonly referred to as ‘Dysphagia’. It is a condition where a person experiences difficulty in swallowing any solid or liquid food or both. Though India still lacks precise epidemiological data on Dysphagia, several studies from the west have reported an incidence of 3 to 30% in the adults and the elderly. With poor lifestyle choices and a concomitant increase in stroke, the risk of inviting Dysphagia is too high. Roughly one third of all individuals with Stroke experiences Dysphagia at some point of time. With varying etiologies Dysphagia could occur in Paediatric, Adult and Geriatric population. While emphasizing its seriousness and its consequences on psychosocial health, WHO has prioritized the early identification protocols, and strengthened the management options for patients with Dysphagia.

How do we swallow?

In simple terms, any intake of food reaches stomach in 3 phases. In the 1st phase, the food is chewed and mixed with saliva (called ‘bolus’) and moved voluntarily to the back part of the oral cavity. In the 2nd phase, food is involuntarily moved into the food pipe (oesophagus) through pharynx. The food finally reaches the stomach through food pipe which is termed as ‘oesophageal phase’.

What are the signs & symptoms?

Several clinical signs and symptoms of Dysphagia could be observed, including drooling (oozing of saliva from mouth), longer time taken for chewing/swallowing, nasal leakage of the food/liquid (nasal regurgitation), painful sensation while swallowing, change in voice after eating/drinking, recurrent coughing during/after food intake, unexplained weight loss, aversion to certain foods, feeling like lump in the throat, and (or) accumulation of saliva in the oral cavity.

In severe cases of dysphagia, airway management and supply of adequate nutrition becomes the primary goal of intervention. Sometimes this condition goes unnoticed because the individual might not feel any pain or passing of the food into the windpipe. This induces complications of lung infections and causes troubled breathing leading to emergency hospitalization. It is always advised to reach for prompt medical help in case of swallowing issues so that further complications could be easily averted.

Whom to contact? Is there any treatment available for this condition?

The primary management team includes Neurologist, Speech Language Pathologist, and Otolaryngologist. Commonly, Speech Language Pathologists spearheads the team of professionals wherein they involve in screening and diagnostic formulation of the swallowing problem using behavioral checklist along with mealtime observation of patients’ clinical signs and symptoms of swallowing difficulties for various food consistencies (Solid vs Semi solid vs Liquid etc). Behavioural observation is further augmented by Instrumental analysis, such as Videoflouroscopy and Flexible Endoscopic Evaluation of Swallowing (FEES). After the assessment, detailed therapeutic plans are formed and behavioural intervention of swallowing is facilitated wherein patients are made to learn swallowing exercises and manoeuvres, postural modifications and changes to the dietary habits which together restores the swallowing function.

Indian traditions have closely associated itself to a variety of cuisines that goes along well with changing geographical boundaries and seasons. If cherishing the food becomes difficult, so does the quality of life. ‘Let thy food be thy medicine and thy medicine be thy food’-with this, we appeal to the readers to spread the awareness on Dysphagia.

Title: Do you Have Difficulty in SWALLOWING???