The skyline in the capital city Delhi is steamed up in smoke; smoke generated from the funeral pyres that have been set up as makeshift crematoriums in parking lots and open spaces. India’s losing fight against the roaring calamity defines the perfect picture of an absolutely disastrous governance. As the agents and the stooges have been engaged in an international face-saving PR (public Relation) campaign to prevent further damages to the genie out of the bottle, the most of India’s soul is down on its knees gasping for breath. The world has shut down its doors with no remorse.

On May 20, India recorded 4,03,738 fresh Covid cases and 4599 deaths in the last 24 hours taking the overall caseload to 2.80 crores. For five consecutive days the death number has crossed 4000 mark. Caution! These numbers are only official, one that faithful government authorities releases; the unofficial numbers could be more haunting. Indian mathematician Murad Banaji has estimated that contrary to government estimates nearly 1 million (10 Lakhs) Indians have already lost lives due to complications of Covid. Day-by-day, the cases are rising exponentially and geometrically as the country has run out of basic healthcare needs from oxygen supplies to hospital beds. In some parts of Uttar Pradesh, they have run out of firewood and in few other ponds and rivers in the neighbouring Bihar, unclaimed corpses have been seen floating from a distance. 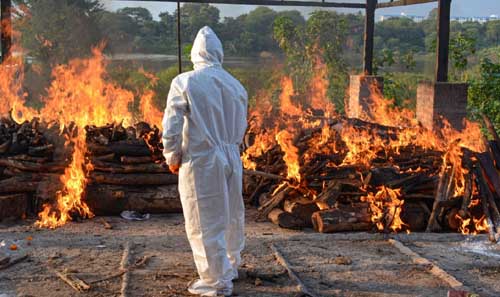 One of the most despairing parts of human civilization is the lack of power within a human to save, protect or prevent a fellow human being from the jaws of death. The resonation of ambulances rushing to and from Hospitals to crematoriums, the morbid smell of the blazing Firewood, the sounds of howl and cry of anguish and the scenes of desperation and agony in an effort to save a loved one have unfolded into a carnage. The proportion of grief surrounding these real time conditions is incalculable.

In January this year at global summits such as the Davos, the Indian government had declared an unofficial victory against Covid 19 and had urged the world to take a leaf out of its magical book titled ‘the Gimmick’. But time machine functions discretely; couple of months down the line, the country is barely surviving with the good mercy of the foreign aid. The sweat and blood of the health care Covid warriors day in and day out have substantially indemnified the gross callousness and brazen ineptitude of the Indian government, its counterparts, and its offshoots at all levels.

This is by far the most heinous human atrocity that country has faced since the partition in 1947. However, the central government is busy enthralling the stage with a violin and humming the tunes ‘Mahaul Teek Hein’ (all is good). The External Affairs ministry and the wily TV media have been doped in a thought that the ruling parties’ image in the global press is worth more valuable than human breath. The Central Vista project, the government’s lavish Rs 20,000 crore complexes for MPs is carried on with full swing, as the dead bodies pile up in its vicinity. The multi-crore IPL extravaganza rolled out in the midst of makeshift graveyards with least sensitivity, until the ‘Bio-Bubble’ was burst into oblivion. These events were enforced after the swarming elections rallies and the Kumbh Mela that played the catalyst role in bombarding the virus in a blitz.

The debacle of the healthcare system in a matter of weeks is only the result of a fractured institution. However, as a society we have rejected Scientific Thought and adopted blind theories based on rumours, the fact which is well reflected at highest corporate and government ladders in the country. Unlike most western countries that had considerably suffered in the past year or so, the second wave hit India on a borrowed time. No country or place under the sun is safe from this contagious virus, the situation is no less than a war. The Indian authorities had over a year to be watchful, to be prepared and get equipped with healthcare facilities. But as the virus darted across the globe with menace, Indian leaders chose to ignore the evident and gloated and bragged about the triumph, before the game had even begun. The masses as usual were trapped under the buttered half-truths voiced by their leaders and trumpeted by the media and devoured fakery over reason.

As India contributes over half of total Covid cases around the world, the international media have turned their cameras into the inside chaos of the system. The brush that was used to paint the spectacle of a vibrant, shining, and incredible country in a bid to sell to the misinformed world is now soaked in a can of fuel. Despite the murky deeds of the Indian media to cover up the mass negligence and apathetic behaviour of the Indian ruling class and its administrators, the global media is learning, rehearsing and unleashing the worst hidden dirt latched for decades. A generation in the subcontinent is groomed with a mindset of easy fix. But at times, practically there is no easy fix for a complex issue and certainly not for a pandemic; only collective effort merged with virtuous conscience from each to all could perhaps foresee the light at the tunnel.