Get Well or Goodbye

A Catholic priest is involved in the life of his flock from the pre-cradle stage to the post grave one. His flock seeks his intercession even as the pregnancy is noticed. This goes back to the age of no sonography, no gynaecologists and no maternity homes. The priest is supposed to pray for safe delivery via votive masses offered for the purpose. But the priest’s role becomes critical at death, before and after it.

Fr Peter Noronha, currently Parish Priest of Bendore parish, is well qualified to speak on the subject because he has had deathly encounters for over 43 years. Fr Noronha was born 68 years ago in Bondel and ordained a priest in 1961. He has had a round of many parishes and in-between was Director of Fr Muller Charitable Institutions at Kankanady for 10 years. He had also been on a study sabbatical at St Francis Xavier University in Canada and has visited a number of foreign countries. So, basically, he has had a wider encounter with death than a priest normally does – both as a parish priest and as hospital director where people are often admitted in the last stages of terminal disease, die and wait in cold storage to suit the convenience of the mourners to organise the funeral. 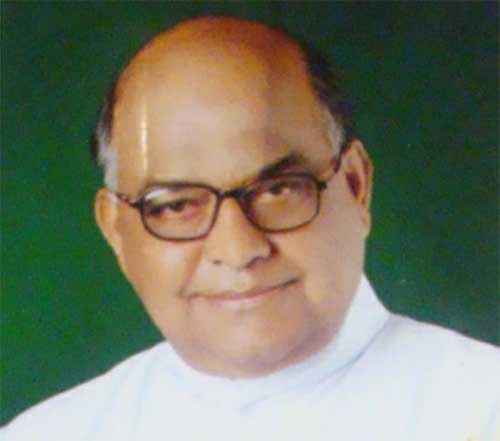 Fr Noronha says that though death is inevitable, not many accept it even after the Biblical deadline of three score and ten. But there are also some who gracefully accept death and are prepared to welcome it. The priest comes into the picture at the threat of death, at death and post death. On the perception of impending death, the priest is called in to administer the last sacraments. This involves providing an opportunity to the dying person to make a true confession of his sins and earn remission, as also for the anointing and prayers for a peaceful death. This can be a double-edged weapon. The patient can interpret the administration of last sacraments, however well intentioned, as his death warrant and give in, instead of fighting off his illness. So, it is a case of saying, get well if you can, or farewell – go forth in peace. Fr Noronha says that he is reluctant to give false hopes to a dying person, but it is not for him to judge the survival chances of the patient. He has to be very sensitive in handling the situation, not only for the sake of the dying, but also for the survivors.

Once the death occurs, Fr Noronha’s focus shifts to the surviving close relatives. He has to partake in the family’s sorrow and try to soothe them through the funeral process and beyond. He tries to impress on the chief mourners the need to take control over a situation which has passed beyond their grip – even in the case of sudden or accidental deaths. He himself gets personally involved when those left behind are orphaned – as when a wife and many children have no means of looking after themselves.

Fr Noronha says that those who lead a righteous life normally have a peaceful death. On the other hand, people who had strayed away from the righteous path, die in fear and emotional violence, cursing everyone for their fate.

Once death occurs, the priest has a series of interventions. He has to set the time for the funeral services and burial. Traditionally, the funeral has to take place within 24 hours of death, because after this deadline, the body deteriorates and is not presentable. But now, with mortuary (cold storage) facilities in most cities, the time of the funeral can be extended to suit the attendance of those whose close relatives have to arrive from say the Gulf or the US or Canada.

On the appointed day and time, the priest arrives at the mourning home to bless the body before its journey to the church for further ceremonies, followed by burial in the cemetery. Christian wedding receptions may start even a couple of hours beyond the stipulated time, but for the funeral the priest arrives on the dot. Though he might be compared to yama dhoot coming to snatch the body, his arrival is actually a soothing beginning to a terminal ceremony marked by discipline. He blesses the body and also expresses consolatory sentiments. Then the raising of the body for its last journey is business-like.

Once in the church, the body is placed with its head facing the altar. The holy mass is celebrated, with intercessionary prayers naming the departed soul. The priest’s eulogy says very positive things about the departed and those remaining behind.

Fr Noronha says that during the funeral ceremonies, he is more concerned to be helpful to the survivors who have to cope with their grief. He points out the Biblical dictum – judge not lest thou be judged. It is not for anyone to judge the dead. Even the most sinful person can have remission after repentance. The Bible has several examples like that of the Prodigal Son to reinforce the infinite mercy of God towards sinners. So, when the priest delivers his eulogy, he has to talk in broad terms about the goodness of the departed and the mercy of God. Thus, Fr Noronha leads the service to soothe and comfort the chief mourners.

The whole funeral service is designed to decelerate the sorrow of the mourners. The hymns sung at the funeral also have the same spirit – surrender to the will of God; `You are the potter, I am the clay’. This theme runs from the terminal illness to post-death. For instance, “Father, hear the prayers we offer for our sick brother/sister (name). May all who suffer pain, illness or disease realize that they have been chosen to be saints and know that they are joined to Christ in his suffering for the salvation of the world…”

And on death, “Lord, hear our prayers and be merciful to your son/daughter (name) whom you have called from this life. Welcome him/her into the company of your son Jesus in the kingdom of light and peace.” “Father into your hands, we commend our brother/sister (name). We are confident that with all who have died in Christ, he/she will be raised to life on the last day and live with Christ forever.”

Fr Noronha believes that those who die must make things easier for those who survive. That includes making a proper will so that those left behind do not fight over their property or debts. Fr Noronha himself walks the talk – by making his will – though he does not look like he’s expecting a call soon.(He made this statement 20 years ago).

(Twenty-one years ago, when I retired and returned from Bombay to Mangalore for good, I started writing three weekly columns for the English newspaper, Vijaya Times, which was bought over, in 2013, by the Times of India Group and closed for strategic reasons. One of the columns was titled “Deathly Encounters”. I interviewed Fr. Peter S. Noronha, then parish priest, Bendore for the above article. He passed away, and was interred, on May 5, 2021. The article is reproduced from the now defunct Vijaya Times)

Title: Get Well or Goodbye