Reading between Lines of Marks & Grades

Grades, scores, marks, ranks, percentiles – whatever the name, it is awarded in a system of assessment called ‘exams’, a constant source of fear and anxiety. Moreover, we are used to seeing ‘toppers’ being felicitated, recognized through front-page headlines and television interviews for excelling in board exams or competitive exams, and trophies and certificates being awarded at annual day events and graduation ceremonies.

But what about the rest? Students being labelled as ‘dull’ or ‘unintelligent’ at school, considered ‘incompetent’ or ‘not fit for this course’ and criticizing and shaming them for their academic performances in front of their parents and classmates surely has a detrimental impact on their self-confidence. Sadly, we do not have a formula to calculate our happiness and well-being, do we? 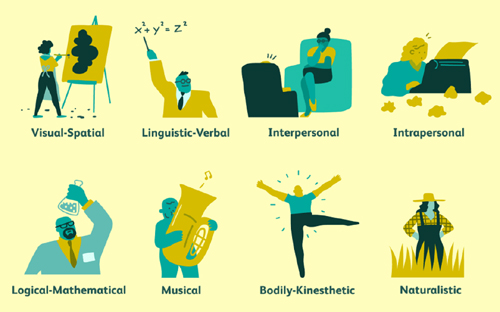 When I look back at some of my experiences in school and college, I feel sorry for those who have been victims of the system. At school, students who scored low marks were made to sit with the toppers, with the expectation that this would make them score more marks (How?!). This also affects the ability of children to build good and long-lasting friendships, because such students would not be on the same wavelength and their natures would be incompatible. Those who scored good marks were expected to keep outperforming consistently. When I scored 20/34 in Statistics in an internal exam in I PU, which was made to look worse on the marks-card as 60/100, it was deemed to be ‘below my standards’ and I had to come up with a plausible explanation as to what went wrong. Similarly, in college, classmates
have told me, “If you have scored low in this test, then I must’ve failed for sure”. (Again, how?!)

Recently, I came across the Theory of Multiple Intelligences by Howard Gardner, an American developmental psychologist, originally proposed in 1983. Accordingly, there are nine modalities of intelligence:

1. Musical – sensitivity to sounds, rhythms and tones of music. They have the ability to sing, play musical instruments and compose music.
2. Visual-spatial – spatial judgment and ability to visualize with the mind’s eye. They may be fascinated with mazes or jigsaw puzzles, or spend free time drawing.
3. Verbal-linguistic – ability to think in words and to use language to express and appreciate complex meanings. They are typically good at reading, writing, telling stories and memorizing words along with dates.
4. Logical-mathematical – ability to calculate, quantify, consider propositions and hypotheses, and carry out complete mathematical operations. They are typically good at logic, abstractions, reasoning, numbers and critical thinking.
5. Bodily-kinesthetic – ability to control bodily motions, the capacity to handle objects skillfully and includes a sense of timing. They are generally good at physical activities such as sports, dance and making things.
6. Interpersonal – sensitivity to others’ moods, feelings, temperaments, motivations and their ability to cooperate to work as part of a group. Also equated with Emotional Quotient (EQ), which is a part of soft-skills trainings today.
7. Intrape57rsonal – concerned with introspective and self-reflective capacities like having a deep understanding of the self, what one’s strengths or weaknesses are, what makes one unique, being able to predict one’s own reactions or emotions.
8. Naturalistic – ability to recognize flora and fauna, to make consequential distinctions in the natural world, and to use this ability productively in hunting, farming, biological science, etc.
9. Existential – sensitivity and capacity to tackle deep questions about human existence, such as the meaning of life, why we die, and how did we get here.

I believe each individual has a different composition of the various types of intelligences. Albert Einstein has said, “Everybody is a genius. But if you judge a fish by its ability to climb a tree, it will live its whole life believing that it is stupid.” Is it the fault of the student, that s/he is enrolled in a system that assesses and grades skills that s/he is not naturally endowed with, while it also does not recognize alternate forms of cognitive abilities?

In the film ‘3 Idiots’, a dialogue goes, “Agar Sachin Tendulkar ke baap ne usse singer banne ko bolta aur Lata Mangeshkar ke baap ne usse cricketer banne ko bolta toh kya woh aaj humare heroes hote?” (If Sachin Tendulkar’s father had told him to become a singer and if Lata Mangeshkar’s father had told her to become a cricketer, would they have been our heroes today?) If we are forced to ignore our core competencies instead of ‘sharpening the axe’, we are bound to underperform in our careers or choose the wrong career path altogether. Therefore, as parents and elders, let us understand that grades may not be accurately representing your child’s intelligence and encourage them to explore their kind of intelligences better.

By Rohan Tauro
Rohan Tauro is a BCom graduate from St Aloysius College (Autonomous), Mangaluru, and is currently pursing CA Final Course from the Institute of Chartered Accountants of India (ICAI). He believes that history gives us the opportunity to learn from past mistakes and helps us understand why people may behave the way they do. As a result, we become more compassionate as people and more impartial as decision makers.
To submit your article / poem / short story to Daijiworld, please email it to news@daijiworld.com mentioning 'Article/poem submission for daijiworld' in the subject line. Please note the following: