‘Buland Bharath Ki Buland Tasveer, Hamara Bajaj’ was the advertisement tagline of Bajaj Scooters during 1980’s and we cannot forget the tag line of the then newly launched Hero Honda Bikes ‘Fill it, Shut it, Forget it’. Scooters, Bikes & Mopeds started gathering steam in the mid 80’s and after that we had a clear demarcation between:

Scooters were more popular in the cities and favoured by families whereas Bikes & Mopeds were both popular in Cities as well as Rural India because the build of the bikes were tougher to withstand the rough topography of the villages with additional advantage of a Good mileage because of 4 stroke technology found in the bikes.

Actually the two wheelers were targeted by the vast middle class population because it did not make a dent on the pockets, I do remember Bajaj Scooter had no issues with the engine, only issues was fixing of Clutch / Brake cable or accelerator cable after a long use, other than that it was the most user friendly scooter with no issues whatsoever.

So slowly the markets evolved and you had LML, Kinetic Honda and many new players entered in to the fray and the 2 wheelers were extremely popular because they were affordable and easy on pockets.

If you see the situation presently, in the total vehicle sales, the share of 2 wheelers is the most as per the data released by SIAM (The Society of Indian Manufactures) 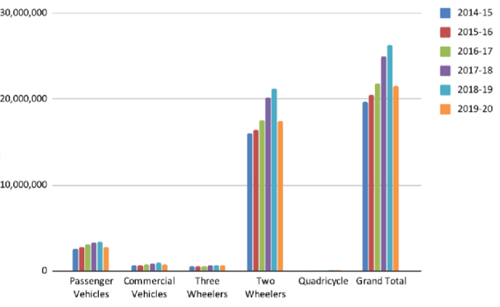 For the year 2018-2019 only August 2018 to March 2019 data is available, we can easily make out from the chart that two wheelers peaked out in the year 2018-19 before taking a hit in the following years due to various reasons and the most prominent reason for the fall in the sales of Two Wheelers in the year 2020-2021 is undoubtedly because of COVID -19 problem when India was under Complete lock down in the First Quarter of FY 2020-2021 and it affected very badly the total industry as a whole.

Let us analyse the October 2020 Sales figures of the major 2 wheelers in India to have a bird’s eye view.

Recently Finance Minister Mrs Nirmala Seetharaman had some words of Encouragement for the battered two wheeler industry, she was saying that there has to be a review about the GST charged to the Two wheelers from 28% to 18% which is subject to a discussion, Finance Minister Mrs Nirmala Sitharaman had earlier said that two-wheelers are neither a luxury nor (De-Merit) Sin goods and so merit a GST rate revision. Her statement was welcomed by the captains of the industry including Venu Srinivasan of TVS & Rajiv Bajaj of Bajaj Motors.

The two-wheeler market has witnessed a significant growth over the last decade. An increased demand in Urban and Semi-urban areas, and a relatively low cost of ownership are some of the leading factors propelling the growth of the Two Wheeler market in India. Being the preferred alternative to Public transports and four-wheelers also adds to its popularity.

Enforcing the tough BS 6 Norms will lead to higher costs of compliance because you have to adopt (FI) Fuel injection system now, which calls for all Two-wheeler engines need Precise fuelling in order to meet the stricter emission norms. This is why it becomes more essential for all BS 6 Compliant Vehicles and bikes to do away with carburettors and adopt fuel injection technology, which is a bit expensive, causing a hike of almost Rs 5,000 to Rs 7,000 alone in most cases adding to these include adding new hardware like bigger catalytic converters, Combi-Braking Etc.

Soon after the Finance Minister gave a statement on proposal to reduce GST on 2 wheelers from 28 % to 18 %, Rajiv Bajaj of Bajaj Motors put forward his views on the said proposal.

“Lot of pain in the market has been aggravated with high GST rate. Prices of two-wheelers could reduce by Rs 8,000 to Rs 10,000 if the GST rate is lowered to 18 percent."

The cut in export incentives has been another shocker. Bajaj Auto has lost close to Rs 300 crore due to the ceiling on export incentives. (MEIS - Merchandise exports from India scheme), any way moving forward benefits under MEIS will also stop because of Tough WTO requirements when the Per Capita Income >1000 USD For 3 Consecutive Years, Then the Central subsidy part has to stop.

Bajaj said the government needed to give consumers incentives at a time when jobs have been lost and affordability is low. “Over Regulation (BS6 Compliance) has led to a 30-35 percent increase in prices for the consumers and cost to the consumer needs to be brought down,” he added.

Looking at the present GST Collections, I personally doubt if there can be a rejig in the GST Rates on two wheelers because this is one main source of income which the GOI cannot ignore. It will continue to be taxed in the 28 % Slab.

By CA & CMA Ranganatha Achar Krishna
To submit your article / poem / short story to Daijiworld, please email it to news@daijiworld.com mentioning 'Article/poem submission for daijiworld' in the subject line. Please note the following: