Dr Wilson Prashanth D’Souza has obtained his M.Ch degree from the famous CMC Vellore, commonly known as Vellore Hospital, Tamil Nadu. M.Ch means Master of Chirurgiae. (Chirurgiae is a Latin word meaning surgery). He is now one among the very limited Neuro Surgeons in the country.

“Where there is a will, there is a way”. This maxim goes well with Dr Prashanth. Born to Peter D’Souza and Theresa Alva at Vittal, Prashanth is the first son among the two. He spent his childhood days at Vittal and studied till his 10th standard in Kannada medium at Vittal and PUC at Puttur. 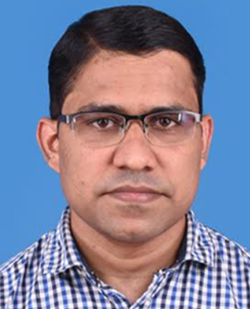 He was a very committed and focused student from the beginning. People say only brilliant brains can venture into doing MBBS. Prashanth was a very mediocre student. While studying in PUC he decided on his own to write the CET exam and started engaging in self-study without attending any coaching. At that juncture none of the family members ever dreamt that Prashanth would be one day Dr Prashanth, M.Ch.

He scored average marks in PUC science and could get a ranking of around 3000 in CET. Through counselling he managed to get a seat for MBBS at Vydehi Institute of Medical Sciences, Bangalore. The family members thought that he would be a doctor practicing somewhere setting up his clinic with an MBBS degree. But he proved us all wrong.

Soon after his MBBS he expressed a desire to do his MS. We were both shocked and embarrassed. Shocked because we were in no position to buy an MS seat for Prashanth and embarrassed because we were helpless to fulfil his desire. But young Prashanth had his own plans. He spent one year in preparing for MD/MS entrance exam and failed. Any other person would have accepted the defeat and stopped fighting the battle. But Dr Prashanth proved himself that perseverance, commitment and focussed hard work would drive one to his destiny.

Prashanth shifted his focus on to Vellore Hospital. He somehow gathered that if he starts practicing there he can get a seat for M.Ch of course with newer and tougher challenges. It is in this hospital Prashanth paved his destiny. He wrote the entrance exam twice during his practice at Vellore hospital. At first attempt he failed to get a seat out of three among nine thousand odd applicants. But in the second attempt he was cock sure that he would qualify to do M.Ch through the lone seat available among equal number of applicants. He passed and there began the hard toil of suffixing M.Ch to his name. He was keen in doing his M.Ch in Neuro Surgery. After six years of dedicated and committed research and study Dr Wilson Prashanth D’Souza, MBBS is now Dr Wilson Prashanth D’Souza, M.Ch.

Poverty teaches one his life lessons. Taken the poverty in the family, if seat had to be obtained through paying donation, Prashanth’s desire of becoming an M.Ch would have still been a mirage. Only his self-confidence and self-belief accompanied him on his uphill journey.

Congratulations Dr Wilson Prashanth D’Souza, M.Ch. You have made us feel proud.

Note: This article on my nephew is not written to blow our own trumpet. I wish this could be a motivation to the younger generation who aspire to achieve success.

By Dr Vincent Alva
To submit your article / poem / short story to Daijiworld, please email it to news@daijiworld.com mentioning 'Article/poem submission for daijiworld' in the subject line. Please note the following: