On the happy occasion of the centenary birthday celebrations of Christine Lobo (Born June 24, 1920, w/o late Thomas Lobo of Kulshekar) held virtually on June 24, 2020, because of COVID-19, her family members, relatives and well-wishers instituted the 'Mrs Christine Lobo Birth Centenary Education Fund' to help a selected number of underprivileged students of St Joseph’s Higher Primary School (Kannada Medium) to complete their high school studies at St Joseph High School (English Medium), Kulshekar with the help of the scholarships.

Already an amount of Rs. 7.65 lac has been kept as a fixed deposit in the bank and out of the interest accruing every year two or three students will be given financial assistance towards their tuition fees starting from June 2021. 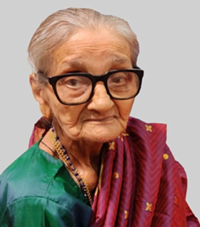 The family members and well-wishers of Mrs Christine Lobo (most of the past students of St Joseph Higher Primary School) are the original contributors towards the Fund.

The Fund will be administered by a five-member committee headed by the parish priest of Holy Cross Church, Cordel, Kulshekar, who is also the correspondent of the school. The headmistresses of St Joseph’s Higher Primary School and St Joseph’s High School and two members - Louis Vas and Liza Lobo - nominated by the family of Christine Lobo will be the other members. The Committee is vested with full powers to manage the Fund and award financial assistance or scholarships to deserving students irrespective of caste or creed and the decisions taken by them will be final.

The Education Fund is instituted by the Kalpane Lobo Family as gratitude to more than 145 years old St Joseph's School where four generations of D’Silva and Lobo families including Christine Lobo and her father late Monthu Marian D’Silva had their education. The school was started by Fr Alexander Dubois (1809 – 1877) founder of Cordel Catholic community, vicar of Milagres parish around 1873 with the help of local faithful including late Paul D’Silva, grandfather of Christine Lobo.

Though originally started as an informal school to teach reading, writing, arithmetic and catechism, in the 1880’s it was remodelled as a primary school and got recognition from the government in 1893.

Subsequently, it was raised to the status of a higher primary school. During the period 1960 to 1980, it enjoyed the status as the best higher primary school in the entire Mangaluru taluk for more than 20 years and had a student strength of about 1,400 at any given year. Among the past students of the school, one can count many scientists, lawyers, doctors, administrators and mayors. High levels of academic standards and dedicated teaching skills are maintained by the school management even today.

However, because of the lack of demand for Kannada medium education among the affluent local families, the student strength has been fast declining and is only about 600 at present. Most of the present students of the school come from very poor families and cannot afford to continue their high school studies at the English medium school situated on the same campus.

Tribute to the founders of Cordel

This small effort is also a tribute to one of the founding families of the Holy Cross Church, Kulshekar, that is, the Cordel-D'Silva clan of Sarakodi and Panjirel. Originally belonging to the Kadri-Kambala area of Milagres parish (further research is required), the menfolk of this D’Silva clan along with a few friends had escaped to Cordel-Panjirel forest to avoid arrest by Tipu’s soldiers in 1784 and had spent almost 15 years in exile. They had kept their faith alive by praying in front of a wooden cross erected by them in the forest.

After the death of Tipu Sultan and restoration of normalcy in 1799, the D’Silva families reunited and settled in Cordel-Sarakodi and Cordel-Panjirel areas as agriculturists. When the French missionary, Fr Alexander Dubois (nephew of Abe Antoine Dubois of Srirangapatna fame) after taking charge as parish priest of the vast Milagres parish in 1865 came to know about the past adventure of Cordel-D’Silva clan, he retrieved the stones of the foundation on which the wooden cross was erected and ceremoniously transported them to the new church area on Kulshekar hill and aptly named the about-to-be constructed church as Holy Cross Church, Cordel.

Both the Sarakodi (their property rights at Cordel were transferred to late Ambu D’Silva’s family only in the 1950s) and Panjirel branches of the Cordel-D’Silva family were well settled in the area when Fr Alexander Dubois acquired about 30 acres of land for the proposed Cordel Church adjacent to the land belonging to the Silva families. The then head of the Sarakodi Silva family, Paul D’Silva became close friend and associate of Fr Dubois in all his endeavours in Kulshekar. Paul D’Silva and his cousins had large land holdings extending from present-day Churchgate and Kalpane areas all the way up to 'Sarakodi Gutthumane'. Even the presently vacant Kalpane Maiden with Yakshagana stage and the legendary 'Morey Club' belongs to one J D’Silva whose current whereabouts are not known to us.

The Cordel-D’Silvas have the unique distinction of evolving two bus-stands on either side of Churchgate, viz. Kalpane and Silva’s Gate (in Tulu Silverena Gate). Because of their mining activities (especially by Monthu Marian Silva), to supply laterite stones for the construction of Mangalore Railway Station at the beginning of the 20th century, the Padavu hill got the new name 'Kalpane' (mining pit). Monthu Silva’s cousin late Casmir Silva named his new Neeradpe house as 'Silva’s Gate' (which later on got corrupted as Silver Gate in English from the Tulu title of Silverena Gate). Maybe, it is time to revert back to the original 'Silva’s Gate' nomenclature?

By the mid-20th century, the Cordel-Silvas lost their importance because of subdivision of property, migration and dwindling agricultural income etc., though they are well respected in local circles. An estimated 85 descendent and matrimonially related families of the Cordel-D'Silva clan – Viz. D’Silva, Castelino, Lobo, D’Souza, Monteiro, Alvares, Pinto, Sequeira, Vas, Rego, Gonsalves etc, with a total population of more than 500 still live in Kulshekar area and an equal number is spread out in other parts of Mangaluru other Indian cities and even foreign countries like Australia, Canada, UK and USA making a grand total of about one thousand members!

Incidentally, Christine D’Silva-Lobo happens to be the senior-most surviving member of the entire 1,000 strong Cordel-D’Silva clan of today.

Born last among the eight children of Monthu Marian D’Silva and Marceline Alvares of Sarakodi, Christine or Kitti was a bright but weak and sickly child. At the age of six, she was admitted to St Joseph’s School, Kulshekar. Around the age of nine, she was infected with severe Malaria fever while on a holiday trip to Needuwale house (Mudigere taluk) of her newly married elder sister, Mary Castelino. It took almost two years for Christine to fully recover from the disease and as a result, she had to discontinue her studies beyond the third standard. Yet she continued self-studying and made it a habit to read every Konkani and Kannada book and newspaper she came across and kept herself informed about local and national events.

In 1943, she got married to late Thomas Lobo (1916-2007) of Taccode, Moodbidri (the original owners of the famous 'Kursagudo' cross hill) and joined her husband to look after their 'Gaudikemane Coffee Estate,' Balige (Near Ballalarayana Durga Fort), Chikkamagaluru. The Taccode Lobos migrated to 'Melthota', Kulshekar in 1946 and again moved to the present 'Kalpane House,' Kulshekar in 1955. For more than 15 years she worked hard to supervise all estate activities, besides shoring her entrepreneurial skills in maintaining large livestock of more than 10 cattle, poultry etc. She was quite popular among the Balige village folk as they were always warmly welcomed to the estate house and were served with coffee and eatables. Even after permanently shifting to 'Kalpane House' she tried her hand as a vegetable vendor for many years in spite of having to look after seven children and aged in-laws at home.

Even at the age of 100, she has not given up two of her childhood habits and they are drinking coffee and reading books and newspapers. At least 3-4 cups of coffee and 5-6 hours of reading are in her daily routine.

Helping a few deserving children with their high school education (which was not possible for Christine in her childhood) through this Education Fund is our way of appreciating all she has achieved during her long and fruitful life.

By J W Lobo
To submit your article / poem / short story to Daijiworld, please email it to news@daijiworld.com mentioning 'Article/poem submission for daijiworld' in the subject line. Please note the following: