Melbourne is the unchallenged ‘Sports Capital of Australia’ and is also sometimes referred to as the ‘Sporting Capital of the World.’ Sporting culture is woven into the fabric of the Capital of the State of Victoria and Sports is part of the Melburnian way of life. Australian Rules Football, Rugby Union and League, Tennis Grand Slam, Formula One Grand Prix, Cricket, Horse Racing, Soccer, Netball and Basketball - every sport boasts of a Stadium of its own with the city unrivalled in spectator support.

When it comes to Cricket, cricket enthusiasts might not have missed the fact that Melbourne Cricket Ground (MCG) hosts all the major cricket tournaments in Australia as the grand final venue. Every year, the day following Christmas on ‘Boxing Day,’ a public holiday, a Test Match commences at the MCG between host nation Australia and an opposing national cricket team that would be touring the land Down Under, referred to as ‘Boxing Day Test Match,’ which this year involves India. The iconic Victorian landmark ‘The G’ was the world’s biggest cricket stadium from 1853 to 2019, until it was outdone by Sardar Vallabhbhai Patel (Motera) Stadium in Ahmedabad, India.

There is pleasant news for the cricket crazy fans across the globe. If you were ever dreaming of living in a residential address named after your favourite cricketer, it is up for grabs. Welcome to Rockbank: the rural-urban fringe in the Melton City Council, approx. 37 kms from Melbourne CBD in the State of Victoria, Australia!

Located in the growth corridor of west Melbourne, ‘Accolade Estate’ (a housing estate broadly means a residential area in which the houses have all been planned and built as a single development) proudly boasts of having its streets named after cricketing greats from 6 cricket playing nations as depicted below. This ‘Estate of Fame’ is bestowed to have all the nineteen streets named after famed cricketers of the world spanning a few generations - Laurie Nash (1932) to Virat Kohli (2020). Aussie great bowler of yesteryears Glen McGrath attended the initial launch of the Project in November 2019.

The Directors Anthony Braunthal and Khurram Saeed of ‘Resi Ventures,’ the Developers of the estate initiated this unique idea of imparting Cricketing legend’s names to the streets upholding their Company’s chiming slogan ‘bringing land back to life’ and as many as 60 names were submitted to the Council for approval . Anthony is the grandson of Aussie sporting legend Laurie Nash and Khurram of Pakistani origin who migrated to Australia at the age of ten is an avid cricket fan, having played cricket all his life.

The Indian Cricket team is in the midst of their 70 day tour tour and I for one thought, the time is apt to throw some light on these Cricketing Streets. After the coronavirus restrictions were lifted in the State of Victoria in November 2020, my friend Asad Parkar (no relation of former Indian opener Ghulam Parkar) and I set off to visit this housing estate in Rockbank. On what turned out to be a gloomy afternoon, we had a first-hand look at the streets named after the Cricketing celebrities, filing this report directly from the base.

The estate is off Leakes road with construction stages 6, 7 and 8 fully accomplished, with Stage 9A ongoing. The government restrictions due to coronavirus epidemic had an impact slowing down its construction pace. 65 houses are completed and 73 are under construction with a timeframe of a couple of years for the estate to blossom. There is a lot of dust around with construction material everywhere with not much greenery at this point of time with planting scheduled for early 2021.

Let’s interpret the above mentioned Street names as to their meaning to have a better understanding:

• Street (St): A public road with buildings on both sides.
• Drive (Dr.): A road that has its route shaped by its environment, like a lake or mountain.
• Way (Wy): A small side street off a road.
• Avenue (Av.): A broad road, typically having trees at regular intervals along its sides.
• Boulevard (Bvd): A wide street that has trees/vegetation on both sides with usually a median in the middle.
• Circuit (Cct): A roughly circular route that starts and finishes at the same place.
• Crescent (Cr.): Road shaped as a crescent moon where both ends join the same thoroughfare.
• Close (Cl.): A dead end street, especially one end in a circular turnaround.
• Grove (Gr.): A road lined with houses amidst a lot of trees.
• Lane (La.): A narrow road.
• Terrace (Tce): A small street that follows the top of a slope.

India has given the world some of the best cricketers. The likes of Kapil Dev, VVS Laxman, Sachin Tendulkar and Virat Kohli have stamped their authority wherever they played and are revered by the cricketing pundits as well as the sport's fans. Visiting the housing estate, we first covered the four streets named after the Indian stars. The first left after entering the estate is ‘Tendulkar Drive’ and the immediate right from there is ‘Kohli Crescent,’ further down passing ‘Akhtar Avenue,’ it’s ‘Dev Terrace’ and at the farthest end is ‘Laxman Close.’ 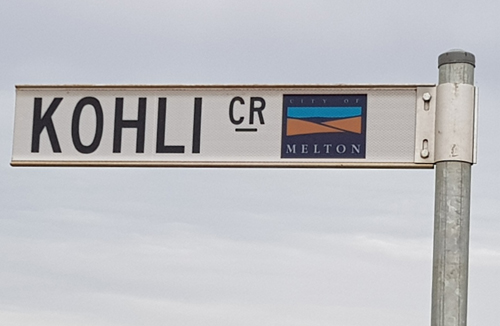 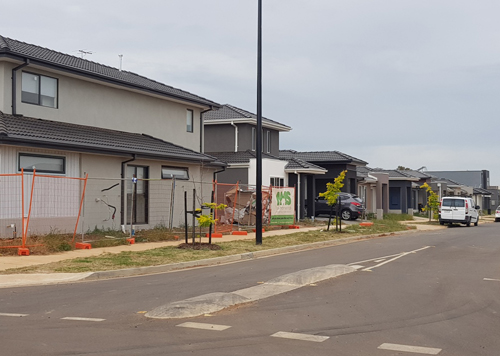 ‘Kohli Crescent’ is named after India’s present skipper in all three formats of the game (Test, ODI and T20) and is the only player to have made it amongst the current crop of cricketers. Virat Kohli, the right handed Delhi batter is regarded as one of the best contemporary batsmen in the world, at the helm of the Indian Cricket team since 2013. The buzz is, when in Melbourne, he may get behind the wheels paying a visit to his namesake street, but we got the better of him by visiting prior. Kohli Crescent appears to be bought with houses completed. The street is at a prime location as it overlooks an active green space of 50,000 sqm of future wetlands featuring a park shaped like ‘cricket ball with stumps,’ a sanctuary for birds and wildlife and thus the properties here are dear. 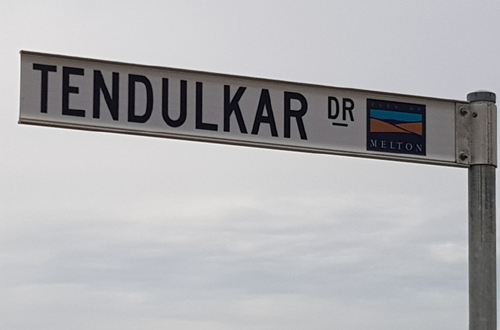 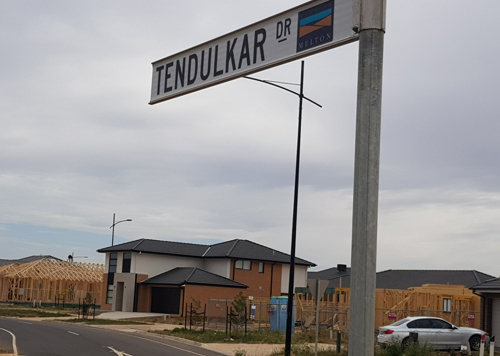 ‘Tendulkar Drive’ - perpendicular to Kohli Crescent is named after the ‘Master Blaster’ Sachin Tendulkar, who is widely regarded as the world’s most prolific batsman. He is the highest runs scorer in international cricket and the only player hitherto to have scored 100 international centuries. The swashbuckling Mumbai batsman, an honorary member of the ‘Order of Australia,’ a former captain of the Indian cricket team, regaled the cricketing world with his scintillating cover drives throughout his career. 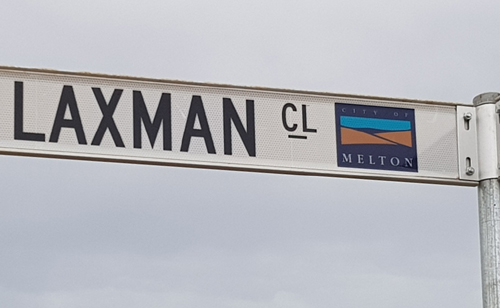 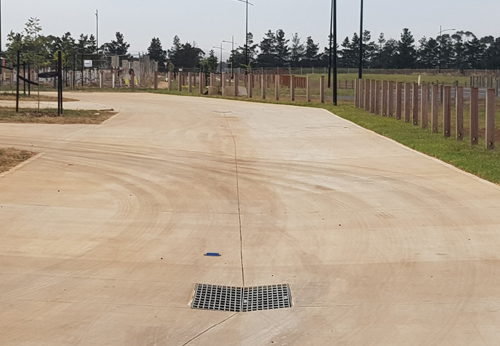 ‘Laxman Close’ is named after the stylish Hyderabadi right-hand batter VVS Laxman, who was known for his elegant stroke play. The most graceful of India’s ‘Fab Four’ batsmen during his playing days, he is best remembered for his memorable knock of 281 in the Kolkata Test (2001), which turned the match and the series ending Australia’s record-breaking winning streak. 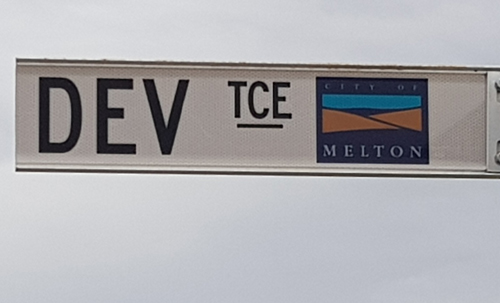 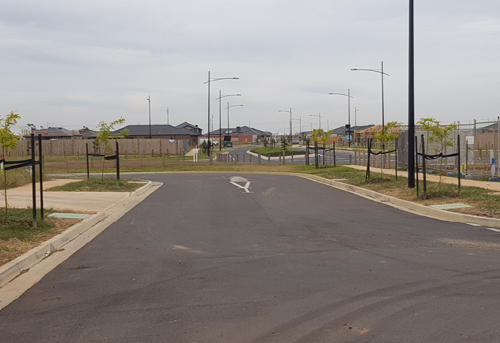 ‘Dev Terrace’ is an honour conferred on India’s first World Cup winning captain Kapil Dev, hailed as one of the greatest all-rounders of the game. A fast bowler and a hard hitting middle order batsman, he is the only player in cricket’s history to have taken more than 400 wickets, scoring over 5000 runs in Tests. The Haryana player is the first cricketer to have bagged 200 wickets in ODIs.

Amongst the names submitted to the Council, the likes of Rahul Dravid and Mahendra Singh Dhoni were looked into. In the case of Dravid, there aren’t any streets ‘with a wall’ and perhaps none of the streets were ‘cool enough’ to be named after Dhoni.

STREETS NAMED AFTER CRICKETING GREATS FROM OTHER NATIONS 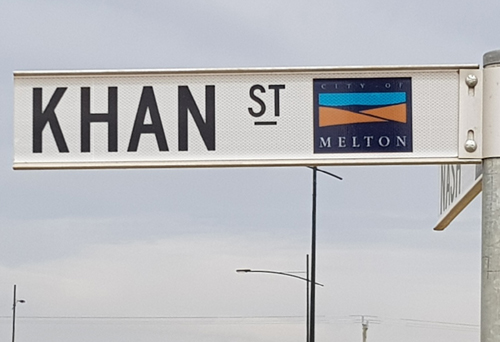 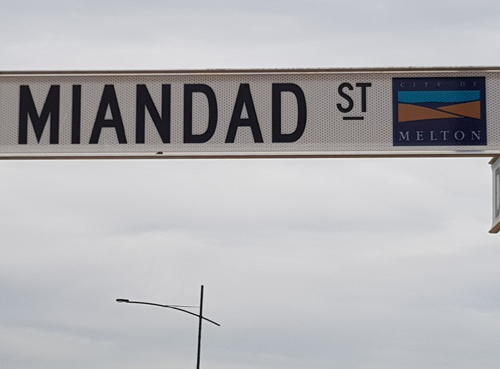 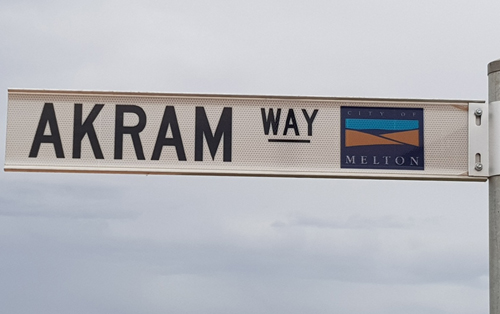 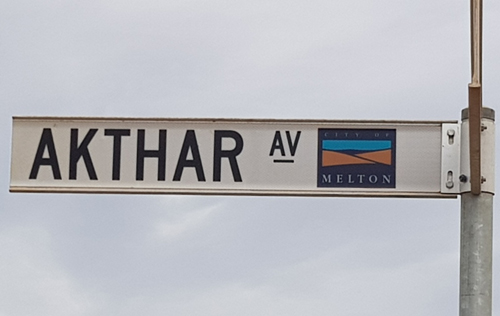 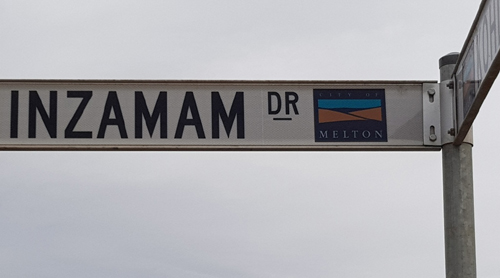 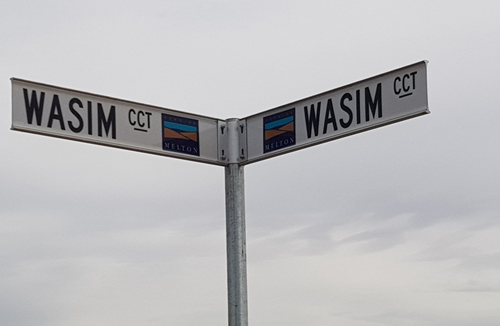 The Pakistanis have been allotted the lion’s share of streets in the housing estate, raising a few eyebrows especially when none of them are named after the English and Sri Lankan stars though Kumar Sangakarra was under consideration. However, one cannot deny the fact that Pakistan has had many remarkable cricket players who have left a mark. KHAN STREET is named after Imran Khan, the current Prime Minister of Pakistan, best known for leading his country to their first World Cup win in 1992; MIANDAD STREET is in honour of Javed Miandad, celebrated for his unconventional style of captaincy and batting, revered for his historic last ball six (needing 4 runs) in the finals of the Austral-Asia Cup against arch-rivals India in 1986 at Sharjah, UAE; AKRAM WAY named after Wasim Akram, married to a Melburnian Shaniera Thompson, is a left hand fast bowler, addressed as the ‘Sultan of Swing’ and is widely acknowledged as one of the greatest bowlers of all time; AKHTAR WAY has it for Shoaib Akhtar, the ‘Rawalpindi Express,’ recognised as one of the fastest bowlers in the history of cricket, the first to break the 100 mph barrier twice; INZAMAM STREET is for Inzamam-ul-Haq, the ‘Sultan of Multan,’ a former skipper and the only Pakistani batsman to have scored 20,000 runs in international cricket arena; YOUNIS LANE after Younis Khan, one the greatest middle-order batsmen in Test cricket also holds the record for most centuries scored by a Pakistani in Test cricket history; *WASIM CIRCUIT is named after Wasim Bari or Wasim Raja or Mohammad Wasim or Imad Wasim? Your take? 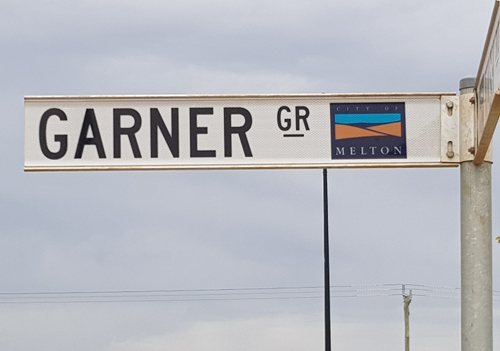 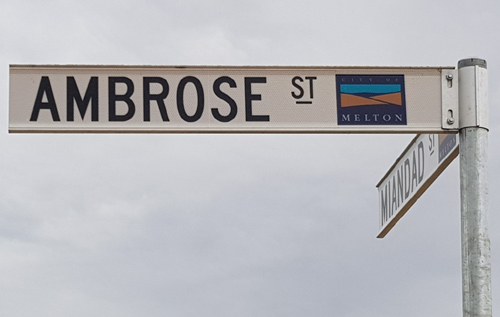 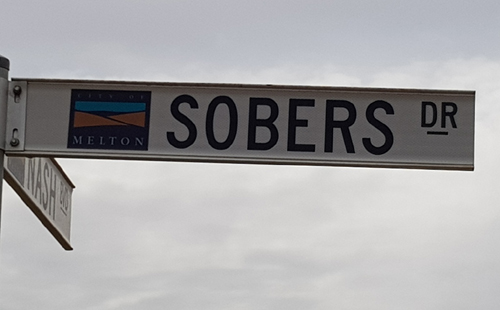 The West Indies were the most feared cricketing squad of the world in the 1970s and 80s, not losing a Test series for 15 long years. The team made up of astonishing batsmen and a battery of super-fast bowlers that included Michael Holding, Joel Garner, Andy Roberts, Sylvester Clarke, Colin Croft and Malcolm Marshall sent the opposition packing. GARNER GROVE is named after Joel Garner, the highest ranked ODI fast bowler of the West Indies cricket team of that era; AMBROSE STREET after Curtly Ambrose, rated the best fast bowler during his time for sheer accuracy; SOBERS DRIVE is for Garfield Sobers, a dual Barbadian-Australian citizen, widely considered as the cricket’s greatest ever all-rounder who represented his country between 1954 and 1974; 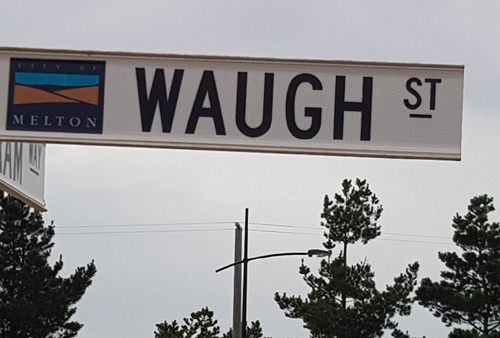 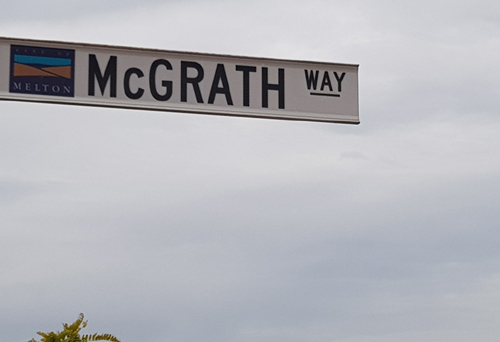 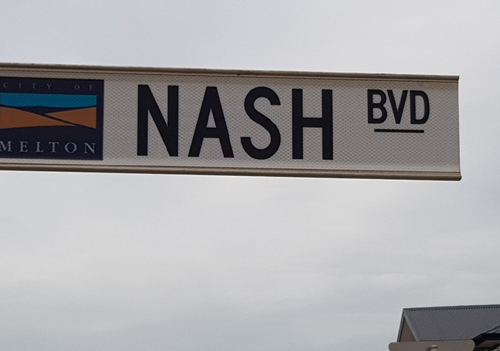 Australia, rated by many as the ‘finest team’ in all formats of the game has a couple of streets named after their cricketing heroes including the estate’s main entrance. WAUGH STREET is named after Stephen ‘Steve’ Waugh, who led the Aussies from 1997 to 2004 to fifteen of their record sixteen consecutive Test match wins and to victory in 1999 Cricket World Cup; McGRATH WAY is in honour of Glenn McGrath, a fast-medium swing bowler known for his consistency in maintaining an accurate line and length; NASH BOULEVARD adorns the entrance to the estate and is befitting as it is a tribute for a sportsman of Laurence ‘Laurie’ Nash calibre who excelled in cricket as well as Australian Rules Football (AFL). In cricket, Nash was a fast bowler and a hard hitting lower order batsman and in footy, he was the team’s leading goal kicker in several matches. It has been revealed names like Donald Bradman, Dennis Lillee, Allan Border did not make the cut due to various factors. 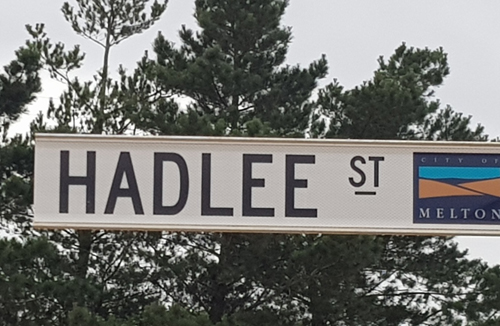 Richard Hadlee is regarded as one of the greatest fast bowlers and all-rounders in cricketing history. HADLEE STREET named after him is parallel to Dev Terrace, his Indian contemporary. 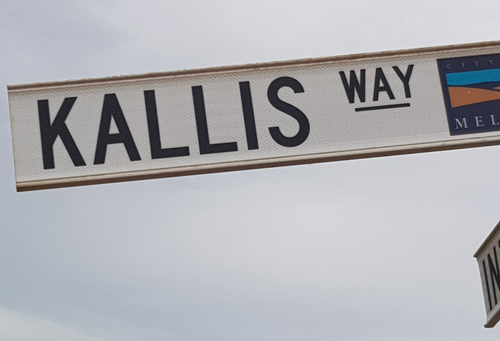 South African all-rounder Jacques Kallis, as of 2020, is the only cricketer in the history of the game to score more than 10,000 runs and take over 250 wickets both in Test Cricket and ODIs. KALLIS WAY is named after the legendary cricketer.

MY CHOICE OF CRICKET STREET NAMES

If I was the Developer of the estate, I would have strongly recommended to the Council to approve five players from Australia (host nation); two each from India, Pakistan, West Indies, South Africa, England, New Zealand and Sri Lanka thus giving representation to all major cricket playing nations of the world. My choice would be:

Each of us have favourite Cricketers we revere and you may well disagree with my picks. Which of your cricketing legends should have made it to be named after the 19 streets? Any Sunil Gavaskar fans crying foul out there?

By Stephen P D’Souza, Melbourne
To submit your article / poem / short story to Daijiworld, please email it to news@daijiworld.com mentioning 'Article/poem submission for daijiworld' in the subject line. Please note the following: