The Society of Jesus, a Roman Catholic order of priests and brothers founded by the soldier-turned-mystic Ignatius Loyola (1491-1556) from Basque region of Spain, with six of his early companions, namely, Francis Xavier, Peter Faber, Alfonso Salmeron, Diego Lainez, Nicolas Bobadilla, and Sima~o Rodrigues in 1539 and officially approved on September 27, 1540 by Pope Paul III. But most people call them 'the Jesuits.'

In the vision of their founder, they seek to 'find God in all things'. They dedicate themselves to the 'greater glory of God' and the good of all humanity. And they do so gratefully in collaboration with others who share their values, including laypersons. They have become part of the extended Jesuit family. 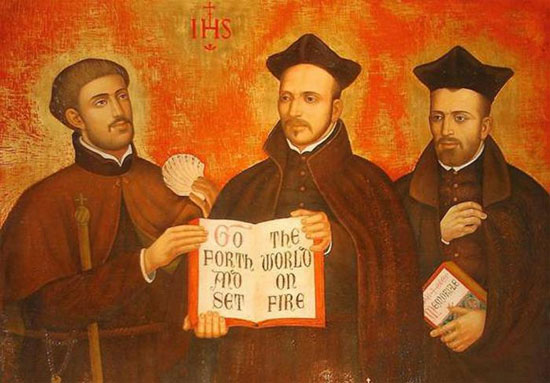 With 16,000-plus priests, brothers, scholastics, and novices worldwide, they are the largest male religious order in the Catholic Church. They are pastors, retreat directors, counsellors, and chaplains. They are also teachers, doctors, lawyers, writers, poets, artists, researchers, scientists, media persons, and astronomers, among many other roles in Church and society. In their varied ministries, they care for the whole person: body, mind, and soul. And especially in their education ministries, they seek to nurture 'men and women for others'.

Jesuits draw on the rich tradition of Ignatian spirituality and reflection. In the retreat centres, parishes, campus ministries, and other settings, offer these resources to all who want to discern God’s presence in their lives. At the same time, they also aim to be 'contemplatives in action', people who bring this spirituality into the wide world. That includes the work on behalf of global justice, care for our planet, peace, and dialogue. Their Universal Apostolic Preferences (UAP) for 2019-2029 are: 1. Showing the way to God. Show the way to God through the spiritual Exercises and discernment. 2. Walking with the Excluded. Walk with the poor, the outcasts of the world, those whose dignity has been violated, in a mission of reconciliation and justice. 3. Journeying with Youth. Accompany young people in the creation of a hope-filled future. 4. Caring for our Common Home. Collaborate, with gospel depth, for the protection and renewal of God’s creation. They accept these UAP as a mission of the Church through Pope Francis, who has approved them.

Four Vows
As members of a religious order, Jesuits take three vows — of poverty, chastity, and obedience — and a fourth vow of obedience specifically in regard to worldwide mission. In other words, Jesuits must be ready to accept whatever mission the Pope requires, a vow that is reflective of broader dedication to the universal Church, and to the greater good of all people from all faiths and cultures.

Their collaboration with the laity flows from their personal relationships with Christ. They see themselves as companions of Jesus, and invite others to join them, as friends in the Lord. Together to build up the body of Christ.

With their friends and collaborators, they also reach out to a broadly diverse world because that’s where God is. From experience and reflection, they know that meaning, value, and divine purpose can be discovered in all things.

Fr Pratap Naik SJ sharing his vocation says, "So far, I am the only Jesuit from my father’s and mother’s household. Others are diocesan clergy and one Dominican priest. My parents gave me the baptismal name Stanislaus of a Jesuit saint Stanislaus Kostka (28.10.1550-15.08.1568), from Poland. From their wedding day they prayed everyday that God may call all or at least one of their children to serve Him and His people. Probably they never thought that one day I would join the Jesuits!!! I studied from second standard to BSc in Hindu management school and college. Hence, I did not have any personal contact with Jesuits. I received my vocation in 1967 through the Jesuit Konkani monthly 'Jezu Rai' ('Soldiers of God' English monthly in colours published by Fr Wenisch, SJ of Madurai Jesuit Province and it was translated into many Indian languages). Then, I began to read the lives of Jesuit saints and blessed in Konkani in Kannada script from my daddy’s collection of books. Jesuit Blessed and Mexican martyr Fr Miguel Pro’s life made deep impression on me. From day one, my decision was to join the Jesuits, though I had great respect and excellent relationship with diocesan priests and Capuchin priests."

As they complete 480 years, the Jesuits request kind prayers for all Jesuits worldwide. As human as all are, they admit to be sinners and weak persons. They rely on continuous prayers and support to become effective instruments in the hands of God.

By Fr Pratap Naik SJ
To submit your article / poem / short story to Daijiworld, please email it to news@daijiworld.com mentioning 'Article/poem submission for daijiworld' in the subject line. Please note the following: