There is greed or avarice for accumulation accretion and aggregation of material things. Whether it is fruitful or not, whether it is essential or not but my wardrobe must be full, complete, crowded and over flowing. There may be things or clothes not used for years together but my wardrobe has a place and it is a palace for the compiled things.

How one is measured or respected as prominent, powerful, influential, important and significant? If one has a gun man around him considered as a great person. If one is many years in politics considered as dominant creature. If one has many people all around him spelled as powerful person. Position location and situation speaks everything and post is counted everywhere. This is seen irrespective of gender, creed colour or caste. In short, people crave for possession, position and power. Let us reflect how one is afflicted, affected, impressed, touched or troubled by possession and position? 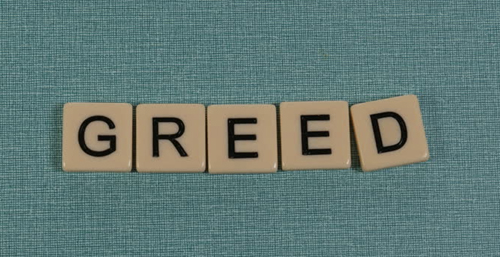 Greed and need: “Earth provides enough to satisfy every man's needs, but not every man's greed,” said Father of the Nation Mahatma Gandhi. The Thinking pattern of today is let me trove, hoard or backlog as much as possible in my barn or shed , this is not in terms of material or temporal things but even in terms of power, potential and skill. The ministers want to grab as many as portfolios that is too creamy, prime and plum in fact they may not have the capacity, scope, space, size or ability to exercise it energetically, effectively and satisfactorily. There are three gates to the self-destructive hell: Lust (kama), Anger (krodha), and Greed (Lobha) - Sri Krishna Quotes (Bhagavat Gita). John F Kennedy Beautifully said “You cannot negotiate with people who say what's mine is mine and what's yours is negotiable”. Greed blinds the people to see the real need, sensibility, or reality of the people and thickens the skin to see the legitimacy of the world and forms a dead, lifeless and barren conscience.

Poverty of Truth: “it is our obligation to speak the truth, and everyone can either take it or leave it, but truth must be in us. We live in such a poverty of truth today”- says mother Angelica. Today people run after the fake and fabricated news and it spreads like wild fire, difficult to differentiate, comprehend and discriminate what is pure, perfect and proper but the people are ecstatic, elated, thrilled and comfortable because one gets what one desires. Many a time media is vile, polarizing and dehumanizing. Speaking truth is the perilous and precarious factors or components because one has to be ready to endure, hurt and suffer ultimately give up one’s convictions and lastly give up life. Today‘s life is duplicitous deceitful, dishonest and erroneous. The world is surrounded, ringed, enclosed by coteries. These parasites and elements eliminate the truth, then where does the slogan Satyameva Jayate (Truth alone triumphs) stand?

Favoritism and Nepotism: The term God father is common, familiar and frequent in every field be it politics or sports or in religious circle or in film industry. The world of today is composed, contained and ruled with favoritism and nepotism. Whichever department you walk in without influence, bribe, gift or graft nothing moves and measured. Corruption has reached to that height, if you openly condemn, decry or criticize you will be finalized or raided by statutory authorities. This not only happens in civil society but religious circle too. Truth slowly, exactly and certainly disappears, disperses and dissipates. Then how can we recite with Nobel Peace prize Winner Sri Ravindra Nath Tagore “Where the mind is without fear and the head held high; where knowledge is free; into that heaven of freedom, my Father, let my country awake."

Freedom of expression: Article 10 of the Human Rights Act says “Everyone has the right to freedom of expression. This right shall include freedom to hold opinions and to receive and impart information and ideas without interference by public authority and regardless of frontiers” and the Constitution of India the Article 19 says: "Everyone has the right to freedom of opinion and expression, this right includes freedom to hold opinions without interference and to seek, receive and impart information and ideas through any media and regardless of frontiers." Today I am influenced by electronic gadgets, media, and public opinions if so how can I express my opinion or give meaning to my expressions? I am targeted, warned my belongings are vandalized? At the same time the constitutional right is used, abused, over used and brushed aside to fulfill the hidden, obscure secluded agenda. “For to be free is not merely to cast off one’s chains, but to live in a way that respects and enhances the freedom of others” says Nobel peace prize winner Nelson Mandela. Am I having the wisdom and big heart to respect appreciate, regard and honor my brothers and sisters freedom?

Equality before law: Article 14 of the Constitution of India reads as under: “The State shall not deny to any person equality before the law or the equal protection of the laws within the territory of India.”... Are we not making the Constitution mockery, sham or travesty? Many a time law is taken into one’s hands by the powerful, positioned and possessed people as their personal property. The poor, neglected of the society has to run for justice from pillars to post. In this sense can we say I am equal before the law? During the Lock down / Pandemic period we have witnessed the weddings of rich people and politicians, if the prescribed number exceeds no FIR is filed and for the poor people FIR is ready and prosecuted in no time, in a sense the entire celebration of the poor people is desecrated. We have enough and more flights to bring back the children of affluent moneyed and rich people who are studying abroad but for the migrant labourers to go to their home town no vehicles, they have to walk miles together bare foot effect of this many have lost belongings and life, . When the celebrities are admitted to the hospital, the media is the first one to cover 24X7 their progress and flashed on the screen as breaking news, what about the poor people who die on the way to the hospital? No media, no propaganda, no breaking news. People are dying of floods the media is busy covering day in and day out the story of girl friends of celebrities. A six-year-old girl was brutally raped in Hapur, Uttar Pradesh, Her private part was crushed, she is fighting for life but there is no outrage in media or social media? Is it equality before the law?

Constitutional Remedies: The Architect of the Constitution B R Ambedkar called 'Article 32' of the Indian Constitution i.e. Right to Constitutional remedies as 'the heart and soul of the Constitution'. It was acknowledged because mere declaration of the fundamental right without effective machinery for enforcement of the fundamental rights would have been meaningless. While Supreme Court has power to issue writs via article 32, High Courts have this power via article 226. Are all our citizens able to exercise this constitutional remedy? To get justice people have to spend heavily added to this they are uneducated, does our democracy which we profess proclaim propagate makes the citizens comfortable relaxed and secure in getting justice? There are so many schemes of the government may it be of Central or state does it reach directly to the people? Why there is dissatisfaction, frustration, irritation and resentment? It is time to figure out!!!

One Nation One Humanity: You can develop the right attitude toward others if you have kindness, love and respect for them, and a clear realization of the oneness of all human beings says Dalai Lama. Variety is not against oneness but it is complimentary, integral and reciprocal. Our nation is rich, well-heeled and well to- do- because of diversity of culture, religion, language, tradition, traits so forth and so on. Living with peace, tranquillity and harmony is brother sisterhood; this is the beauty and bounty or special character of India. Before becoming a Sikh, a Muslim, a Hindu or a Christian, let's become a human first. - Teachings of Guru Nanak.

The blood of every citizen substantiates that we have one humanity; the desire of every child of Mother India is unity in diversity. The every breath of Indian is Vande Mataram. We must learn to live like brothers and sisters or we will perish together as fools says Dr Martin Luther King Jr. Possession and position takes you nowhere but it becomes poison at the last breath of one’s life. A choice or a challenge is thrown at us to choose Humanity as a living altar to love, care and share and not to possess position and become a poison.

By Fr Joachim D'Souza
Fr Joachim D'Souza a Catholic priest who obtained his Doctorate in the faculty of Human Rights. He has finished his Bachelor’s degree in Sociology and Laws (LLB) and completed Masters in Sociology and Laws (LLM). As an advocate he mediates to settle the long pending litigations of property, families and drafts the legal documents. Presently he resides at Asha Kiran, Heroor, Brahamavar, Udupi, Karnataka, India. Mobile: +91- 9902774580
To submit your article / poem / short story to Daijiworld, please email it to news@daijiworld.com mentioning 'Article/poem submission for daijiworld' in the subject line. Please note the following: