Dr Sanislaus Francis D’Souza, an eminent scientist of international repute at Bhabha Atomic Research Centre (BARC Mumbai) and a loving family man, passed away on July 18, 2020, at Mangaluru after a long battle with Cancer.

Dr Stanislaus Francis D’Souza aka “Stan” to his loved ones and friends and “Dr S F D’Souza” in the scientific circles, was the youngest of a big family of eight, born to Cyprian and Teresa D’Souza at Kadri Kambla, Mangaluru. Of these, two brothers joined the Soc. of Jesus to become priests- late Dr (Fr) Valerian and Dr (Fr) Leo Dsouza and three sisters joined the Apostolic Carmel order - late Sr Dulcina, Sr Geralda and Sr Vincent. He lost his parents at an early age, while still studying (1964, 1968) and it was his elder brother Austin who had to take on the mantle of a parent. Stan had a lot of respect and appreciation for his brother Austin all through his life. 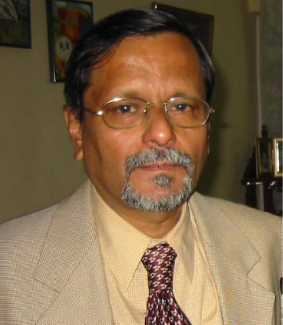 Stan completed his schooling and college at St Aloysius School & College in Mangaluru and graduated with a B.Sc. degree in Chemistry/ Physics. He then went on to do his MSc in Biochemistry at Mysore University and excelled as a gold medallist. Subsequently, he made it through an all India selection and joined BARC in 1972 as Scientific Officer after graduating from the 15th batch of Training School of Bioscience. He did his PhD in Biochemistry from Mumbai University and thereafter his post-doctoral fellowship at the University of Texas Health Sc. Ctr. at Dallas (UTHSCD) under late Dr. Paul Srere. His Professor was very happy with the intelligent and hardworking Dsouza that he wanted him to continue to work in his laboratory, however, D'Souza decided to return to his country India and continue to work in BARC.

Stan met his wife of close to 40 years in BARC, Dr Sandra Elizabeth D’Souza, a fellow scientist and they went on to have two children. Throughout his career he kept a very low profile at home and his kids never knew the magnitude of his work until the outpouring of love and messages came from his students and peers in the scientific community. He was always their “Daddy”.

Staying in a nuclear family in Mumbai, he brilliantly managed a demanding career and family life. He broke all stereotypes of what women were conformed to do and was an equal partner in his marriage. He encouraged his children to pursue all that their hearts desired and was always supportive of them. He had a passion for cooking and would always come out with mouth-watering recipes to the delight of his loved ones. He also loved travelling and saw to it that every summer the family took a vacation together.

He took time off on weekends/ vacation to spend time with the children and their spouses/ families. He was able to invest in some quality time at home in his last days. He was an inspiration to his children/grandchildren and was always available to guide them in their personal and professional aspirations. He was both a great father and mentor. The children were forever in awe of their parents who were both senior scientists in BARC, working on some of the most cutting edge work in their respective fields. They were able to balance both their work and homes in raising the kids with great values.

During his tenure as Head, NABT Division, he enriched many lives via his research. He coordinated various activities of the Division with respect to Food, Agriculture and Biotechnology. His work was not confined to the laboratory only. He travelled far and wide to remote villages, talking to farmers and understanding the ground reality and the challenges they faced. He was down to earth and could make anyone comfortable right from the start. His speeches moved from English to Hindi and Kannada, and though his diction in local languages may not have been the best, the enthusiasm and passion he put in his presentations kept all wrapped in his words. Under him several varieties of high yielding and disease resistant crops have been developed in oil seeds and pulses, and have been released and notified in the gazette by the Ministry of Agriculture, Government of India for commercial cultivation in the country. Well known among these are over 25 varieties of groundnuts which have helped to improve the lives of groundnut farmers in Gujarat and Karnataka. He played a key role in popularizing the Trombay groundnut varieties in the country. He was instrumental in setting up NABTD agricultural field facilities at Gauribidanur and Vizag. Because of his interest and pursuance, NABTD has established an impressive network of Agricultural Universities as DAE partners in the different areas of Nuclear Agriculture internationally too.

He was elected “Fellow of the Association of Food Scientists and Technologists (FAFST) India for his contribution to the field of Food Biotechnology with special reference to Immobilized Enzyme and Microbial Technology. He was a “Fellow of the National Academy of Sciences’ (FNASc) and Fellow of the Maharashtra Academy of Sciences. He was recipient of the AMI- LOUIS PASTEUR AWARD for his significant contribution to the field of Microbiology. In Mangaluru, he was awarded the Eminent Aloysian award from his Alma-Mater, St Aloysius College and also received the Rachna Award 2013 as “Rachna Professional of the Year”.

Dr D’Souza had over 40 years of research experience in the field of plant biochemistry and enzyme and microbial biotechnology with special reference to immobilized enzymes and cells for use in bioprocessing, biosensors, bioremediation and nanotechnology as well as use of nuclear radiation for food preservation and plant breeding. He nurtured and directed some of the research groups viz. entomology and pest management, plant physiology and biosensors and these have blossomed into established research areas. He has to his credit over 200 scientific papers published in reputed International Journals, over another 200 papers in textbooks and Seminar proceedings and a few patents to his credits.

Apart from being a scientist he has been a great mentor to many students. He was Professor in Homi Bhabha National Institute and Adjunct Professor at the Institute of Chemical Technology, Mumbai. He guided over 25 PhDs and touched and enriched the lives of countless students and researchers in universities where he lectured. There was always a stream of students on the phone or at home seeking advice or guidance knowing they could count on his help. Dr D’Souza saw a spark in each of them and would encourage them, even though many a time they failed to see it in themselves. The countless messages he received on “Teachers Day” was a great testimony of the “Mentor” that he was.

After retirement he continued as a Raja Ramanna Fellow in DAE, chairman of RTAC agriculture committee, and till recently, Food Security committee. He was Founder Member, of Biosensor Society of India and served as Vice-President of BSI till 2019.

Over time his visits to Mangaluru were often short ones because of leave constraints. It was only this time that his stay was a long one (March to July) and that too in his own house, all because of the COVID crisis. Who was to anticipate that he would pass his last days here in Mangaluru and be buried here in Bijai Church with his family around?

His academic achievements have been summarized by the Chairman Atomic Energy Commission and Secretary Department of Atomic Energy, K N Vyas as following “Dr Dsouza had a very sharp mind and an uncompromising attitude for work. ………thanks to his efforts, BARC groundnut variety could be grown in Challakere region and it was very much successful. Dr D’Souza can be considered as one of the most prominent scientists of international repute of BARC in the recent past. We are proud of his achievements. Dr D’Souza was a mentor for many of the present generation scientists of BARC and his absence will be a great loss to all of them personally.”

By Dr Sandra D'Souza
To submit your article / poem / short story to Daijiworld, please email it to news@daijiworld.com mentioning 'Article/poem submission for daijiworld' in the subject line. Please note the following: