The world is shutting down a bit more each day since The World Health Organisation [WHO] declared novel corona as a global pandemic. The Coronavirus pandemic spread out across sixty countries on six continents within nine weeks. While a lot still remains unknown about the virus, we do know that it is transmitted through direct contact with respiratory droplets of an infected person (generated through coughing and sneezing). While COVID-19 continues to spread, it is important that we as a community take necessary actions to prevent further transmission to reduce the impact of the outbreak and support control measures.

About 90,893 people and more have fallen victim to this deadly virus. The outbreak did not only cost thousands of lives but also did severely affect the livelihood of many. People were let go as 60 -70 per cent of business activity stopped and the global economy entered into recession. In India the total number of jobs expected to be impacted were 136 million as per the National Service Scheme [NSS]. Up to 53% of business in the country were projected to be significantly affected there was a fear that Indian economy too would be affected severely. Major companies in India that manufacture cars, package food and drinks and various other items have temporarily suspended or significantly reduced operations. 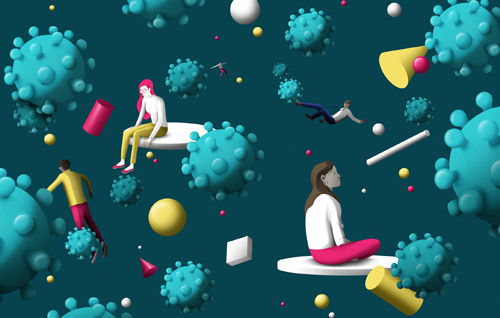 The education system in schools, colleges, universities have been hit hard in the light of this ongoing threat. Multiple school level and college level exams have either been cancelled or postponed until the further notice from The Central Board of Secondary Education (CBSE) and State boards as to avoid large gathering of students, putting them at risk of being infected. Where normally the schools began in the first week of June, Schools have delayed the admissions for the year 2020-21 so far. Major exams such as the Entrance exams and various other competitive exams like NEET, JEE, CLAT etc have been postponed until the lockdown resumes. Online classes emerged as the go-to solutions for schools to cope up with the syllabus despite the lockdown, but this has raised concerns among educational experts including those at UNESCO and UNICEF. On April 15 the United Nations Children’s Fund (UNICEF) said, “Millions of children are at increased risk of harm as their lives move increasingly online during lockdown in the covind-19 pandemic.” According to the statement internet exposure puts children at the risk of “online sexual exploitation and grooming, as predators look to exploit the pandemic”.

Under the shadow of the Covid-19, the lives of millions of children have temporarily shrunk to just their homes and their screens. The teachers pointed out certain challenges that comes with online classes, students with good internet connection have been able to join in for the classes, but for those who went back home to their villages or stay in small towns struggle with the internet speed and are mostly unable to attend. Many students don't have the kind of devices such as laptops or smart phones to keep the connection going. Those are the real challenges that hinder the process of online learning. Students who are pursuing higher education outside their countries are likely to face other challenges mainly in the form of postponement of internal assessments and relevant exams since all their assignments and tests will be delayed, it will have a direct impact on the final results.

Although the coronavirus pandemic is similar to other pandemics in history in terms of its origin that is it was transmitted from wild animals to humans, it has taken its toll on our social lives. This maybe the time to reset, never before has the world come to standstill. The next 5 years are going to be the golden period for media and entertainment, businesses may experience an increase in productivity due to reduced staff. Less traffic on the roads mean less pollution, the education sector is now completely based on the digital platform, the universities are introducing new software to their curriculums such as digital campus where the students can access their college library, fee payment, online classes etc. This present crisis has highlighted the importance of investing in technology.

By Neha Sharon D’Souza
Neha Sharon D'Souza currently studies at Presidency School Mangaluru. She enjoys almost all kinds of music, especially the ones that are energetic and upbeat and loves art, drawing, sketching, painting and doodling.
To submit your article / poem / short story to Daijiworld, please email it to news@daijiworld.com mentioning 'Article/poem submission for daijiworld' in the subject line. Please note the following: