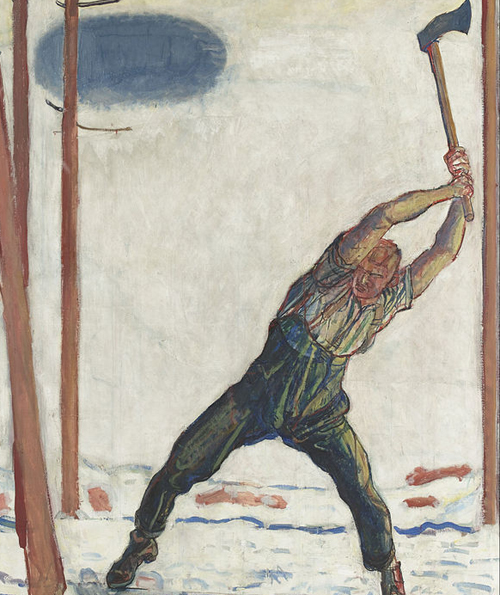 Serene, placid in the morning sun,
It stood, like Atilla the Hun.
With the sweet allurements of a million fragrances,
It brought, even the katydids into trances.
Rising out, in the billowy wind,
The squirrels capered 'round its midst.
A duty has to be done, and it will.

A foul stench seeps the air,
'He' had appeared out of nowhere!
Work had taken its toll on the man,
Imperative, to him, was the money to be had!
Stood there, did he glancing,
An entity of his utmost liking.
A duty has to be done, and it will

Gleaming in the morning sun, it spooked,
A cold, emotionless carving of Wootz!
Earnestly waiting for its time to frolic,
While it chopped, in the hands of the Workaholic.
Nothing, could impede its movement,
Not even he, fraught with discontent.
A duty has to be done, and it will.

A sickening crack resounded all 'round,
A wail emanated, forever bound!
As the devil's incarnate struck,
With all its might, on the pitiable trunk.
The squirrels romped away in fright,
As the axe struck with all its might!
A duty has to be done, and it will.

Where the gallant one hath stood before,
Remains of him lay in a furore.
The sickening contraption stood gleaming,
Smiling at his handiwork of evil.
The man lugged at his lumber,
Sold it at the jumble, for a dollar!
A duty had to be done and it will!

By Karthik Prabhu Bantwal
Karthik Prabhu was born in Abu Dhabi, UAE and moved to Mangaluru, India, where he has spent the better half of this decade trying to learn new things! He currently studies at THE LEARNING CENTRE, a sister institution of CFAL. He enjoys creative writing as one of his hobbies, in association with STEM academics.
To submit your article / poem / short story to Daijiworld, please email it to news@daijiworld.com mentioning 'Article/poem submission for daijiworld' in the subject line. Please note the following: