My Experiments with Building House of my Own

Psalm 127:1- Unless the Lord builds a house, its builders labor over it in vain;

Having lived in a spacious home of our own, it was always a feeling of strangeness and suffocation to live in somebody’s house though paying the rent regularly and legally. For any change to be carried out, may be a very vital one, you need the landlord’s permission and abide by his conditions. I had bitter knowledge of landlords rather landladies when it came to the question of inflicting insults deep to the heart. I remember how the landlady of my brother used to irritate him whenever his children climbed on the gates or kept them open. One of my relatives had to pay the entire cost of painting for a bed room where he fixed a hook for the mosquito net. 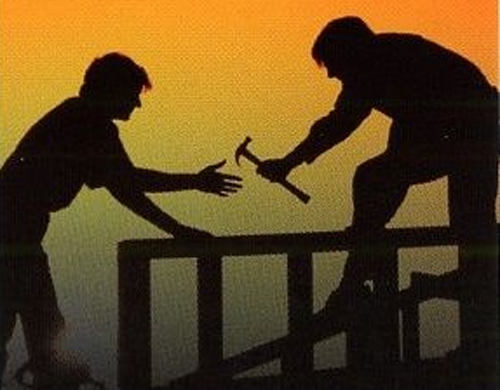 We moved into the college staff quarters, ground floor fourth house in June 1991. Closer to college, lunch at home, next compound to the school for children, markets nearby and all facilities, this was an ideal place for a small family of four. As years gone by, the management brought in a regulation of ten years maximum in the official staff quarters and had to move out. This was then. However I too thought of moving out building a house of my own. I was strongly advised by my well-wishers to go in for a flat as that would reduce many tense situations. But I was very clear of one thing: big or small, near or far away I should have an independent house even if it is a thatched hut.

The search for a plot started in 1997 and continued for another two years. I almost inspected the entire location of Mangalore from Ullal to Panumbur, Mangaladevi to Vamanjoor. At times the location was good but finances didn’t support; the rate was within reach but documents not in order or the approach road was too narrow to move about. In the meantime, some of the leading real estate agencies promised so many assurances but when you went near, then you realise that they are only promises. George Orwell in his short story

“Shooting an Elephant” says: things are clear enough at a distance, but the nearer you get to the scene of events the vaguer it becomes”. This was my many encounters.

Finally someone took me to Bondel. The last stop of route 19 city bus. The location was calm and the plot was a raised hillock. The property was owned by a joint family- some three brothers and all married. One of the brothers was rather an old man with daughters to be married. I was taken to their house and moved by the condition of this man and decided to go for a part of the plot that would be his share. Got a copy of the document and consulted my lawyer, a venerable old man but well versed in land dealings. He asked me to meet him after a few days and accordingly I met him. He said: sir, do you have to buy this plot? I understood the tone of his voice and enquired about the legalities involved. His main argument: This is a joint family hereditary property of three brothers. Whether you buy a part or whole of it, all the brothers and their children must sign at the time of registration. Later if some grand children want to make a claim, we can’t rule out. I had to listen to the balanced advice of the advocate and returned the documents.

The second location was Kodical. A fine property of 11 cents with two big jack and a few coconut trees within affordable range. Two of us bought it dividing 6 and 5 and built a compound wall with broad gates thinking that my house would be there. Planning was done and a water diviner was taken there to locate a bore well. Somehow I wasn’t fully into it thinking of the distance and children’s schooling. I approached a real estate office and someone from there brought me to Attavar and showed me an independent house near KMC hospital. He voluntarily took me to the present house site of mine and gave me the details; it is 10 cents owned by so and so, if you approach him he might give you 5 cents and thus I got this plot by the end of 1998.

The land is ready and the building process should start. I didn’t know any engineer or contractor. One day casually talking to one of my colleagues, asked him whether he knew someone. This gentleman mentioned this to one of his friends, a shopkeeper, which was overheard by a customer and that customer happened to be a student of this professor and he was directed to me. To my surprise this was my first batch student of II PUC in 1981. This student brought me the engineer and the house was completed in May 2000 and we occupied it on May 26.

I realised the words of the Bible that unless the Lord builds a house, its builders labour over it in vain.

Title: My Experiments with Building House of my Own