From an Ordinary Man to be a Dad

We all want to be the best parents we could be for our children. But there is often conflicting advice on how to raise a kid who is confident, kind and successful. Some dads are very much involved in the lives of their children, while others neglect, ignore or even abuse their kids. That is a fact.

In our society, mothers still have the most power and influence when it comes to raising children. Many fathers may be more vulnerable to criticism than mothers because there is still less support in our society for fathers as actively involved parents. There still is an assumption in our society that mothers are the primary caregivers and that they have the power to determine the involvement of others in childcare.

Women have a greater biological role in childbearing than men. A mother’s nurturing relationship with her children may be rooted in biological conditions like pregnancy, birth and breastfeeding. Societal pressures of motherhood for women are more than the fatherhood for parenting. Women are still primary caregivers. However, it is now well established in literature that both women and men can be good parents and most parenting skills are ‘LEARNED’ by ‘DOING’. But it is a known fact that parenthood is more salient for women’s identity than for men’s and women are more likely to feel an obligation or duty to engage in parenting than men. They spend on average more time on parenting than fathers. 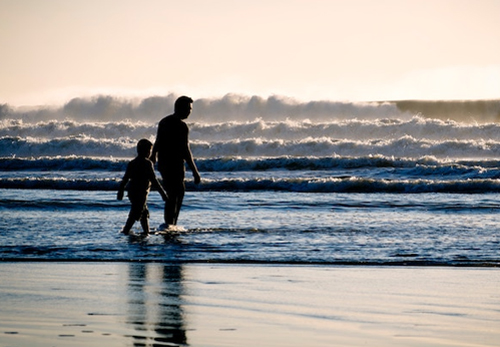 Societal changes have affected family life over the past decades. Especially rising divorce rates and mother’s participation in the labour force have stimulated the mothers and fathers to reorganize their family life, with fathers taking a more prominent role in parenting. Nowadays in the urban environment where both parents are working, fathers tend to play a more active role in the parenting of their children. Research (Crouter and McHale 2005) says that working mothers may spend more time with their children before school and on off workdays than non-working mothers.

With all these differences, it has been proved scientifically that fathers play a significant role in the social, emotional and behavioural development of children. Fathers influence children’s social and emotional development. Traditionally, parenting research and practice ignored fathers, neither considering their influence on child development nor controlling their influence when looking at the influence of mothers. Father comes next, as the mother is a ‘primary’ caregiver. He is ‘secondary’ in taking care of children. But a father’s influence on child development is equally important and significant as a mother’s. This significant role is ignored very often because of the time they spend with their children when compared to mothers. However, science says it is not the relative amount of time but that the quality of the interaction which influences the child’s mind. Fathers do invest both emotionally and financially, in their children’s lives. It is believed that children with more educated fathers tend to do better in school tests. Fathers who talk more to their children have children with higher vocabularies. The children of supportive fathers who engage with them in various activities, including play, are more likely to have more positive friendships and are more able to control their emotions.

It is not about criticizing the parenting skills of fathers. Both parents need to keep communication open and not be so quick to criticize. If fathers are even going to be regarded as equal partners in family life, they need the same support the mothers get. It is all about giving fathers space to parent.

By Vinet D'Souza
Vinet D’Souza resides in Manipal and works as a lecturer at St Cecily's PU College, Udupi. A lecturer by profession and writer by passion, her articles have been published in Daijiworld Weekly and other magazines.
To submit your article / poem / short story to Daijiworld, please email it to news@daijiworld.com mentioning 'Article/poem submission for daijiworld' in the subject line. Please note the following:

Title: From an Ordinary Man to be a Dad