How did we Forget about Indian Economic Foot Soldiers?

India’s battle with poverty, over-population and poor infrastructure is a very old one. This pandemic showed us how our economic systems can break apart under stress. While the country's macroeconomic parameters need focused government attention, the nation cannot take for granted the unassuming and disregarded soldiers of our economy - Migrant labourers.

The Global Multidimensional Poverty Index (MPI) 2018 report of the UNDP-Oxford University which was released in September 2018 suggests that at least 364 million people are poor. The 2011 census tells us that 454 million people are migrants, which means 37 percent of India's population has moved within the country from one state to another. By 2020, the number of migrants was projected to reach 550 million people. We need to know that the set of people that we are going to take into consideration in this article are the ones who are poor and who have migrated from states with less economic prospects such as Uttar Pradesh, Bihar, Jharkhand, Madhya Pradesh, Chattisgarh, Odisha and West Bengal to employment-rich states such a Maharashtra, Punjab, Haryana, Delhi, Gujrat, Karnataka, Tamil Nadu and Karnataka. The lockdown imposed on March 24, is said to have affected over 40 million migrants according to the World Bank. 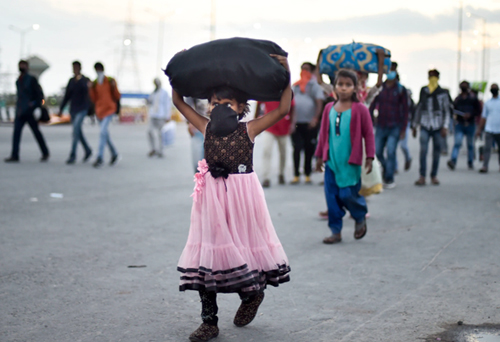 A group of migrant workers walk to their native places amid the nationwide complete lockdown, on the NH24 near Delhi-UP border in New Delhi, Friday (Photo: PTI)

These migrants include construction workers, factory workers, agricultural workers and even domestic help. These are the unseen and under-regarded citizens who carry the burden of our economy. Once lockdown was imposed in India, these labourers lost their jobs and daily income overnight, income which supported their families. A telephonic survey by Stranded Workers Action Network (SWAN) has shown that 120 million people have lost their jobs, and of them, 64 percent had less than Rs 100 with them. Even if the labourers did get free food, they still would not be able to survive unless they have accommodation. Dharavi is an example of such a locality, where migrants had to live in extremely small rooms with 6 to 7 people. About 1400 people in slums had to use the same washrooms. And accommodations that were available in the construction sites were soon to close because having workers and feeding them was costly for the construction companies which did not receive economic sustenance packages from the federal governments. By the first week of the lockdown, migrants in major metropolitan cities, out of sheer despair, started travelling to their hometowns on foot, despite states like Delhi and Kerala immediately ramping up Public Distribution Systems. Chief ministers of almost every single state issued statements requesting the migrants to not walk back home.

However, states such as Bihar, Rajasthan and Uttar Pradesh were forced to arrange for buses to ferry migrants back. Lakhs of migrants entered these states and were quarantined. It is important to note that for any state administration it is easy to impose a lockdown with section 144, but relatively difficult to maintain lakhs of people under home quarantine, in places where lockdowns are being slowly lifted. Similarly maintaining quarantine centers in states such as Uttar Pradesh and Bihar has been an administrative challenge. Public Distribution Systems (PDS) need to be scaled up as much as possible. The supply chain was a problem a few weeks ago. But since restrictions have been eased, these chains have been restored.

Nobel Laureate (Economics) Abhijeet Bannerjee had suggested issuing temporary validation identities- Like ration cards, to reach out to more people, even ones not registered for monthly rations. With the availability of surplus food grains with the Food Corporation in India (FCI), sourcing grains will not be a problem. A much more efficient way of getting food on the table would be to set up food banks, where cooked food from supplied commodities is supplied as per requirement. One more persistent issue the migrants faced was poor accommodation. Given that multiple civic body structures were not in use during the first 4 to 5 weeks of the lockdown, rehabilitation of these migrants to unused government buildings, schools, colleges, town halls etc would have wholly solved the problem of shortage in living spaces. Keeping in mind that most of the state administration was busy in contact tracing and setting up quarantine measures, it is understandable that there was a shortage of manpower. But this manpower could have been easily brought into the field with the help of our reserve and paramilitary forces. Perhaps their expertise could have helped in quick rehabilitation of migrants and could have averted a major socio-economic crisis. It is still not too late to enlist their help. Under the Rs 20 lac crore economic package, the central government has announced a “One Nation, One Ration card” scheme that promises free food grains for 8 crore migrant workers (over the next two months), who are outside the PDS database. But again, the grains must every stomach without any lapses.

Food and roof do not ensure survival. Cash in hand and in-flow is an important parameter to keep things in motion within the economy. Direct Benefit Transfer (DBT) through Jan Dhan- Aadhaar- Mobile data is something that both the central and state governments have initiated. Almost 97 percent of the migrant workers have not received any cash transfer from the government according to Stranded Workers Action Network (SWAN). There is a strong possibility where a below poverty income recipient has not been listed in the above-given data set. For example: In a survey involving close to 3000 vulnerable households, researchers at Centre for Sustainable Employment (CSE) at Azim Premji University found that -- 64 percent of calculated vulnerable households did not have Jan Dhan Accounts. In such cases, the administration needs to enlarge its dataset from unemployment, Mahatma Gandhi National Rural Employment Guarantee Act (MGNREGA) and pension records. Hence the objective is to widen the footprint as much as possible for cash transfer for the next 3 to 5 months.

Considerable amounts of money have been transferred by the center and states from consolidated funds to these respective recipients, the amount that reaches the hand lies between Rs 1000 to 2500 when in reality the requirement varies from Rs 5000 to Rs 7500. Dr Raghuram Rajan suggested spending around Rs 65000 crore for around 130 million people, with Rs 5000 being deposited per family. But the supply of some sort of monetary support has to continue till the 3rd to mid 4th quarter of the financial year.

Despite assurances and a more proactive approach, the migrants still felt the need to return. Perhaps, the lack of direct communication created a trust deficit between the administration and the labourers. As a result, the migrants due to lack of transportation started walking back to their hometowns along highways and railway tracks, with their belongings and families. It is impossible to ignore the images that were seen in the past 45 days. Deaths due to hunger, thirst and accidents will keep rising till the lockdown stays on, Transportation remains scarce, till people do not get their jobs back. The big debate about transportation has created a coordination gap among the states and between them and the center. The tussle between political parties and allies is testing India's Federalism and in turn hurting national unity in addressing our unprecedented problems. The migrants had to pay the fares themselves to get ferried across the states by special trains arranged by the Ministry of Railways. Certain states such as Maharashtra had to pay for the migrant fares from the Chief Minister's Relief funds. Some states seemed reluctant to have migrant workers return since it was feared they would carry the virus along with them from the hotspot cities. But the migrants' compulsion to return to their hometowns is not a blind trend. Take for example Punjab, a state that produces almost 38 percent of India's supply of wheat. Rabi crop harvest and Kharif crop plantations in Punjab managed to retain almost half of the 13 lac migrant labourers. Out of the 10 lac migrants who registered to go back home, 35 percent decided to stay back because they saw newer job opportunities. 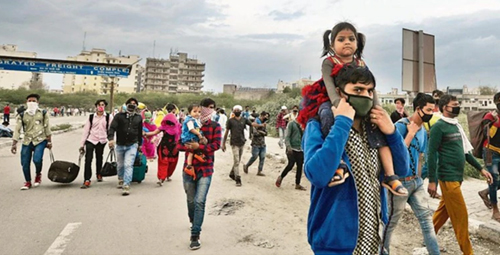 What happened in the state of Punjab shows that if there is a promise of labour, migrants will stay on. Yet the majority of the migrants still want to return home. The question arises as to what the migrants will do once they are back home, and when they will be able to return as labourers and rekindle the economy. Uttar Pradesh has attempted to address this problem uniquely by trying to create jobs right in the state for around 2 million migrants who will be returning home. This impressive initiative would manage the sudden rise in unemployed citizens in the state, but it could just as easily damage the employment distribution within the country. Cities and industries would have to scramble around to fill in the vacuum created due to reverse migration. The Uttar Pradesh government has proposed an ordinance exempting firms from almost all labour laws for the next three years. The Gujarat government has announced that it will follow in UP’s footsteps and allow new companies to set up shops over the next 1,200 days to be exempt from major labour laws. Madhya Pradesh, however, has taken a more balanced approach by ensuring employment benefits such as overtime pay benefits. India has had a long history of strict labour laws that have inhibited the growth of national and international investments and has needed a major overhaul. However, hasty reforms without strong research and planning, under the current circumstances can make things much more difficult than they are. The labour laws amendments must incentivize and more importantly protect the labourers from being at the mercy of their employers. The hike in minimum wages from Rs 182 to Rs 202 per day certainly helps, but not at the cost of labour rights. The abuse of labourers has the potential of creating labour movements all across the country and that could damage the recovering economy and create chaos within the socio-political system.

The center and state governments will make further fiscal spending in the future. But there is no changing the damage that has been done due to administrative delays and misses. There are only lessons to be learnt now, and acting upon what has been learned. States must coordinate and must adopt localized models designed specifically for their context. The central government needs to decentralize its power and command, and at the same time maximize the efficiency of accumulating their resources and distribute them judiciously whenever and however asked upon. The federal bureaucracy must rely on accurate and up to date data, to keep a close eye on ground realities and plan accordingly. This data will tell if their policies are reaching the people and suggest a corrective course of action. We as a country and as a society cannot let these people become a forgotten list of statistics. A coronavirus pandemic is an event on earth that will be remembered for centuries, and these statistics could haunt our country for long. A country’s power comes from its people. And our economic power comes from these - Economic soldiers. I sincerely hope that the country sustains their lives and in return they push forth the bandwagon of our economy faster than ever before.

By Sheldon Mascarenhas
Sheldon Mascarenhas (22) has his roots in Mangaluru but is currently in Bengaluru. He has a Bachelor of Engineering in Aeronautical Engineering. He has worked as an intern at Hindustan Aeronautical Limited, Axiscades Limited and as a research student at the Indian Institute of Science. His interests lie in writing and analysis. He is passionate about subjects such as economics, politics, policy-making and technology.
To submit your article / poem / short story to Daijiworld, please email it to news@daijiworld.com mentioning 'Article/poem submission for daijiworld' in the subject line. Please note the following:

Title: How did we Forget about Indian Economic Foot Soldiers?