As we celebrate ‘Earth Day’ (April 22), amidst a nationwide lockdown, it is time to sit back in our homes and deeply reflect, on how we can collectively be guardians of nature, by tackling the biggest challenge to the future of humanity, and the life support systems, that make our earth a better place, for humans and biodiversity. As such the primary aim of Earth Day is to bring about an ‘ecological conversion’ in the hearts and mind-set of people, from all walks of life.

We need to ask ourselves uncomfortable questions regarding the ecological integrity of our Planet Earth! Not only, ask questions based on scientific facts that will ring a bell in our inner conscience, but dare to ask questions to people in power who can take action on climate change. In all our reasoning, we need to put science, rationality, education and reason ahead of trendy dogmas – Before it is too late?

The year 2020 marks the 50th anniversary of the annual Earth Day celebrations. This year’s theme for Earth Day is ‘climate action’. It denotes the enormous challenge, the vast opportunities and contributions that each of us can make in mitigating carbon release and slowing down global warming.

This article is so very different from the rest of our earlier articles published to date. It opens up a new wave of thinking, which is thought-provoking, intellectually stimulating, and revolutionizes the way; how, by our actions, we can safeguard the earth from global warming and the impact of climate change. It is primarily written to stimulate the imagination of Religious heads of all Faiths, globally…..To awaken themselves and their flocks, as to how they could be instruments of change and contribute toward a ‘Clean safe environment’ in places of worship, be it a diocese/parish, temple/math, gurudwara etc.

This article also aims to promote honest discussion and dialogue, while respecting divergent views as long as particular interests or ideologies will not prejudice the common good of the earth. Instead of being just thinkers, we need to ‘Tinker’ with ideas.

We are requesting all religious communities, to keep an open mind and think out of the box and find modern solutions, functional and non-polluting, that contribute towards a green environment and build sustainable ecosystems, which will be role models for all community members to follow.

A. Candles - Candles, since their creation, have been used in the rites and ceremonies of many religions. Its origins may be traced back thousands of years. The practise of lighting candles is an important tradition in Christian churches, communities and families; so also, lighting lamps, diyas in temples and other places of worship is an age-old practice.

The lighting of a candle in the church in front of a statue, an altar, a sacred image or the Sacrament, is a manifestation of faith that leaves a tangible, visible sign. The church uses candles in almost all the sacraments, from baptism to anointing, as irreplaceable symbolic elements.

We feel that burning of candles, deepas, diyas (bee wax/paraffin wax) in churches, temples, shrines and other places of worship should be discontinued because they directly contribute toward enhancing the carbon footprint, increasing global warming. Envisage hundreds of thousands of places of worship worldwide, burning millions of candles, deepas and oil lamps, and directly releasing greenhouse gases to the environment. We should start using a more energy-efficient eco-friendly product such as solar-powered LED lights.

Burning candles as a source of light or purification is a misguided concept. It contributes to increased carbon dioxide emissions. Candles are made of paraffin wax, and burn very inefficiently at low temperatures, releasing carbon dioxide. Paraffin wax is nothing but pure hydrocarbon from fossil fuel. It is a heavy alkane fraction distilled straight off crude oil.

One can argue that we generally use candles made of beeswax. Let us put the record straight, no doubt bee wax candles are carbon neutral but the chemical composition of beeswax in a candle is not especially dissimilar to petroleum (paraffin) wax. When you burn it, it does produce carbon dioxide, just like burning a petroleum fuel. But it is ‘carbon neutral’ just like a ‘bio-fuel’, in the same sense that we talk about ‘carbon neutral’ fuels in that context – like bio-oils or ethanol or biodiesel or so forth. These fuels all produce carbon dioxide when burned – But it is carbon that is naturally cycled through the ecosphere carbon cycle – Not from fossil fuel. 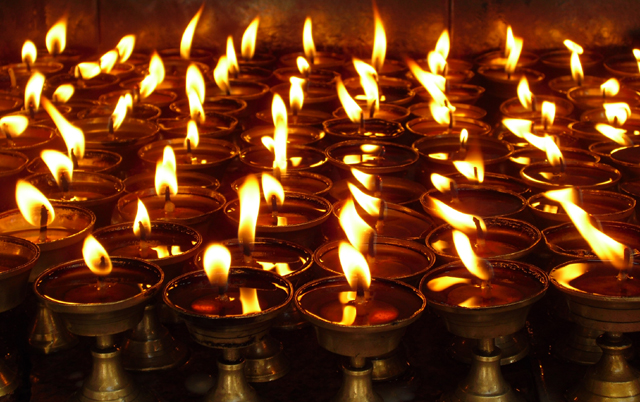 Apart from releasing carbon dioxide, carbon monoxide, nitrogen dioxide, candles will give off toxic chemicals such as benzene, (carcinogen) toluene (responsible for health hazards) along with invisible particulate matter.

Carbon Footprint of one single candle - Research shows, burning a paraffin candle for one hour will release about 10 grams of carbon dioxide; whereas a CFL bulb will emit about 5 grams per hour. Burning 500 candles could result in about 10 times more CO2 emissions than regular 40-watt bulbs.

Solution - Technology that is behind solar powered candles made of LED guarantees respect for the environment.

B. Solar Lighting/Heating - Most of the traditional Churches and other places of worship have strong sensible architecture, with high roof and domes to allow for natural cross ventilation and sufficient natural solar light to come in.

The roof of these buildings should be fixed with renewable energy technologies like photovoltaic (PV) panels mounted on the rooftop to provide for all lighting needs (lights/fans/AC) as well as heating energy requirements of all buildings in the campus, may it be a wedding hall, prayer hall or a sports complex? Excess energy should be fed to the grid and the carbon credits earned exchanged for monetary benefits. 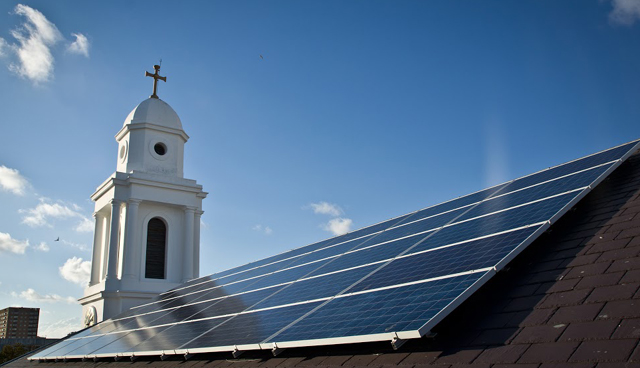 C. Vertical storied buildings - A vision plan that encompasses tall green vertical buildings to leave maximum lung space for tree avenues, and mini forests. Freeing up spaces brings about essential joys of light, air and greenery. This will support creating healthy and walkable communities for senior citizens. Tall buildings influence the microenvironment. This will result in more open spaces with adequate natural lighting and better quality air. Green tall buildings have the potential to produce as much energy as they consume or produce even more energy than they consume, described as positive energy buildings.

D. A concept called Urban Food Production - These tall buildings should have their own green spaces using plants and trees through green roofs, rain gardens, and for reduction of rainwater run-off and the terraces should be self-sufficient in urban food production. 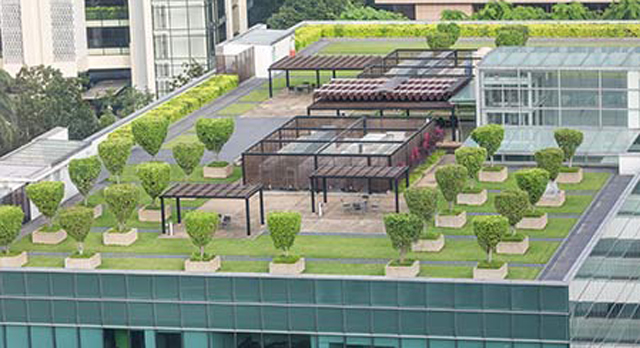 E. Rain Water harvesting - Many other techniques, such as using packed gravel or permeable concrete instead of conventional concrete or asphalt to enhance the replenishment of groundwater, through either rooftop rainwater harvesting or groundwater recharge. 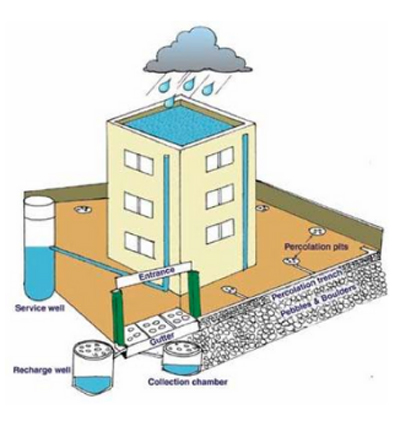 F. Wealth from waste - Today many places of worship have their community halls that cater to marriages and other functions. An alternative to this process is converting waste into fertilizer and recycling wastewater. Organic fertilizer could generate income by retailing it to farmers.

G. Solar Powered Electric Crematorium - It is frequently considered more environmentally friendly. It takes up less land and helps with the problem of overcrowded cemeteries.

H. Ecological Footprint - In a world where the finite resources of the earth are diminishing, the concept of green building has become the ethical ‘in-thing’ in an attempt to save our planet from despair.

I. Social responsibility accounting - To begin with, one particular diocese headquarters/Mutt can take the lead and implement the green building and green renovation concept, so that it will act as a driving force for others to copy or improve upon. This model building should conduct an eco-audit to monitor and evaluate its carbon footprint to ensure that it conforms to environmental, economic and societal needs. Unlike financial accounting, it should focus on the contribution that the business gives to society and the environment through its behaviour and activities. This in turn, should be incorporated in the audited balance sheet. In doing so, it will bring about transparency and accountability and will tell the present and future generations, if the building is self-sustainable or not. Later on, this will cause a ripple effect wherein other parishes/ maths will follow suit, including individual households. The carbon credits so earned could be a big revenue generator and the watchword would be ‘We Practice What We Preach’ in safeguarding our common home, Mother Earth.

Conclusion - Due to the recent developments worldwide, there is a growing sensitivity to the environment and an urgent need to protect nature, along with a growing concern, both genuine and distressing, for what is happening to our planet. We have to realize that a true ecological approach always becomes a social approach; it brings forth a new awakening in terms of environmental consciousness for every economic activity undertaken. Such awakening can alter our perception of what kind of development is desirable and in-turn the policy choices we make. The most important benefit of Green Living is what it offers to our environment. It positively influences our climate and overall ecosystem by reducing the carbon footprint.