'The sparrow that is twittering on the edge of my balcony is calling up to me this moment. A world of memories that reach over half my lifetime, and a world of hope that stretches farther than any flight of sparrows' - Donald G Mitchell (1822-1908), American essayist and novelist.

That the gentle lovely tiny bird was hardly remembered on World Sparrow Day, March 20, forebodes that its requiem is not far away. It is so tiny in its class that nobody took note of it. It is such a rarity now that I need to enlighten the present younger generation with little help from Wikipedia. 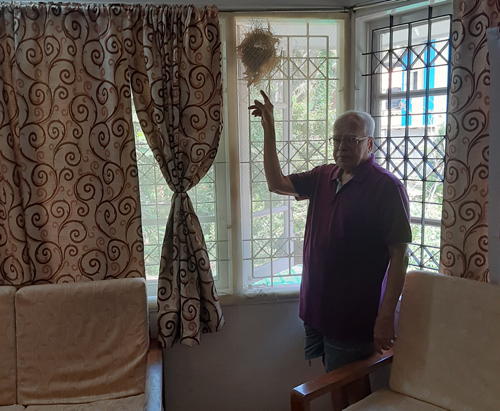 The house sparrow is a bird of the sparrow family found in most parts of the world. Females and young birds are coloured pale brown and grey, and males have brighter black, white, and brown markings. The house sparrow is strongly associated with human habitation and can live in urban or rural settings. It feeds mostly on the seeds of grains and weeds, but it is an opportunistic eater and commonly eats insects and many other foods.

Because of its numbers, ubiquity, and association with human settlements, the house sparrow was culturally prominent. It was extensively persecuted as an agricultural pest. It has also often been kept as a pet.

All that is past. In the rural setting, the birds that woke me up at dawn with their low-key chirping, are a rarity today due to the wide use of insecticides in farming and the progressive replacement of thatched/tiled houses by concrete slab houses. In the urban setting, high-rise buildings with closed balconies give the bird no welcome for nesting or resting. Above all, the high tension electric wires and transmission (communication) towers ring the death-knell of the gentle tiny birds.

Apart from my childhood tryst with sparrows in my village setting, I was also woken up in my Colaba (Bombay) flat with their low-key chirping. The local grosser was its source of food. When I retired to my new cottage in Bondel, Mangaluru, closed for two years pending retirement, the sparrows had made the house their own. They had laid their eggs and raised their chicks in all sorts of places, mainly the top of the ceiling fan rods. They say that sparrows pre-tell baby cradles. In our case, we were hopelessly past the reproductive age. They must have correctly read the situation and left us alone. Yet, they come back to build their nests outside the windows closed to keep the mosquitoes at bay.

Some good Samaritans are trying to host sparrows by providing them with artificial habitats and keeping for them food and drink. Let us salute them and wish them luck.