'Which painting in the National Gallery would I save if there was a fire? The one nearest the door of course' - George Bernard Shaw (1856-1950), Irish playwright, critic, political activist and winner of Nobel Prize for Literature.

Paintings on fire is no more a joke, as witnessed in the Notre Dame fire. On April 15, 2019, a fire broke out beneath the roof of Notre Dame. Bernard Shaw could not have helped the wall paintings destroyed in that fire.

Wall paintings in caves, nearly 30,000 years old, had been discovered in 1969 in the rock faces in a cave in Namibia, Africa. But, the most numerous and sophisticated pre-historic paintings are on the walls of caves in the south-west of France and northern Spain. Buddhist-themed paintings at Ajanta date back to 5th century AD. While I have seen Ajanta paintings, my first tryst with wall paintings goes back to 1954 when I was a student at St Aloysius College. The walls and ceiling of its chapel were, and are, covered with paintings by Jesuit Brother Antonio Moscheni. 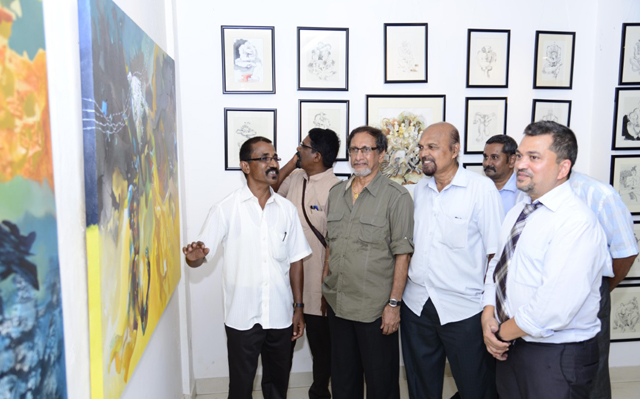 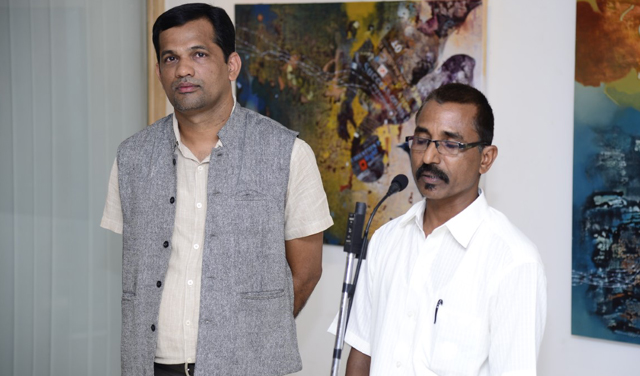 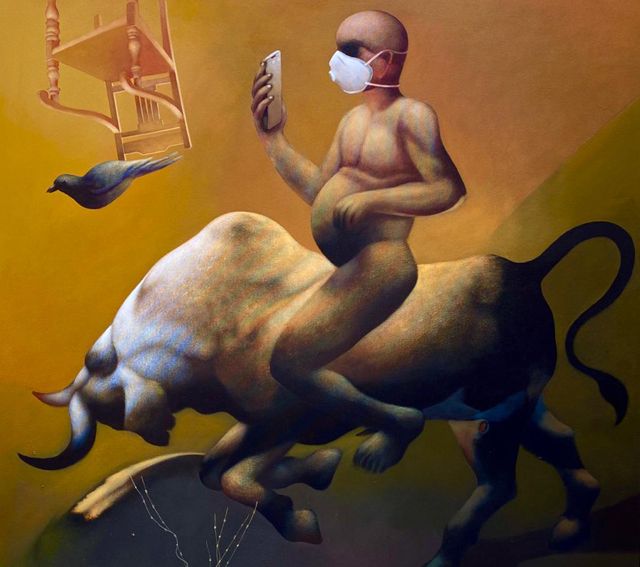 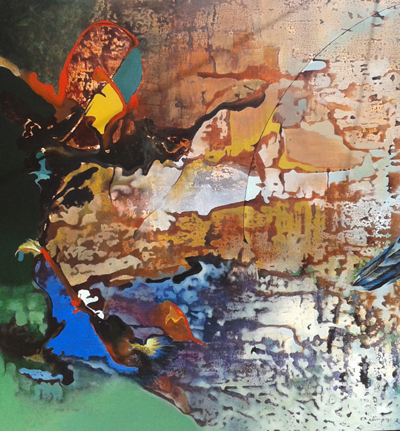 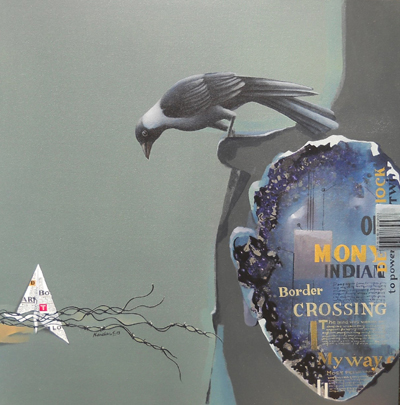 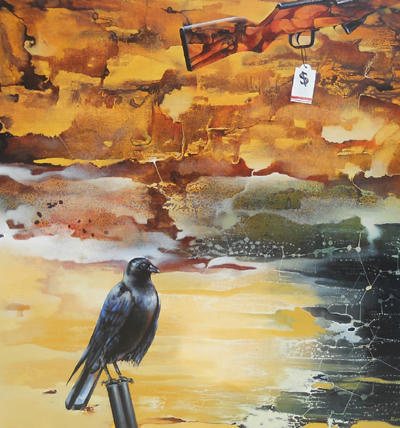 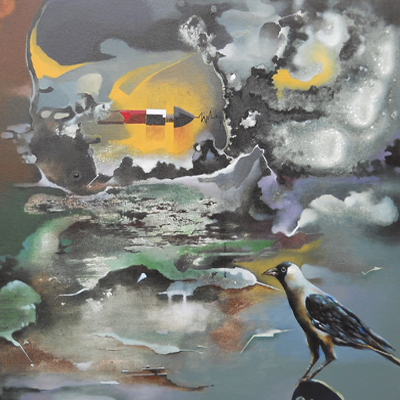 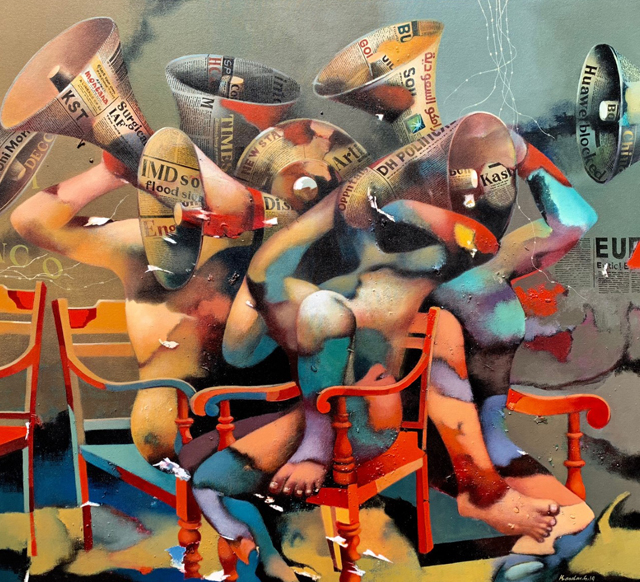 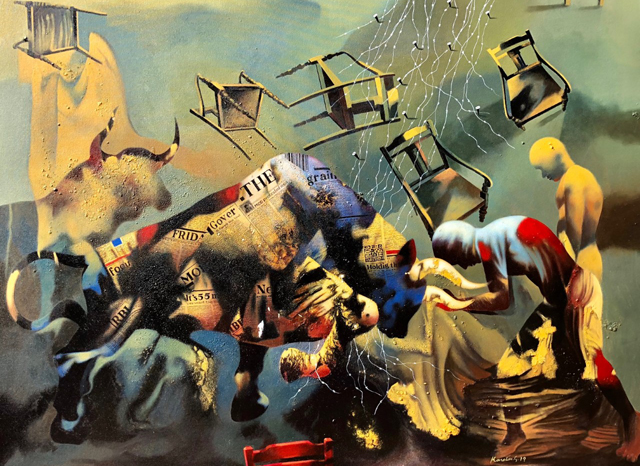 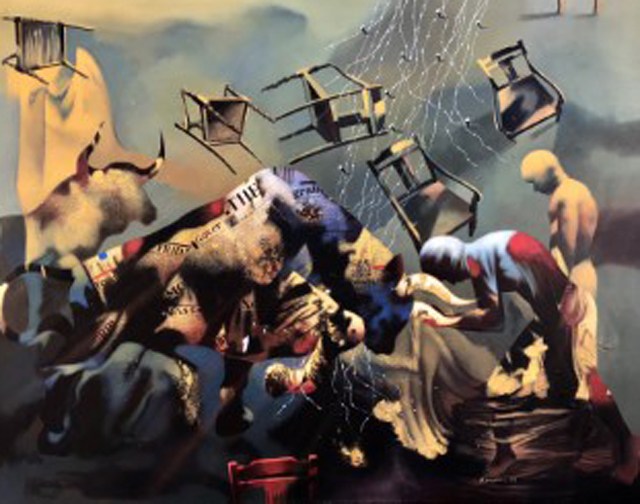 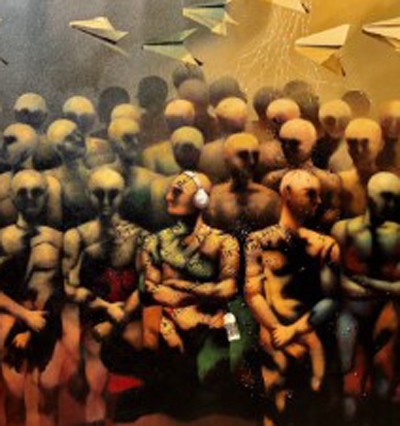 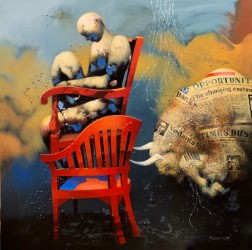 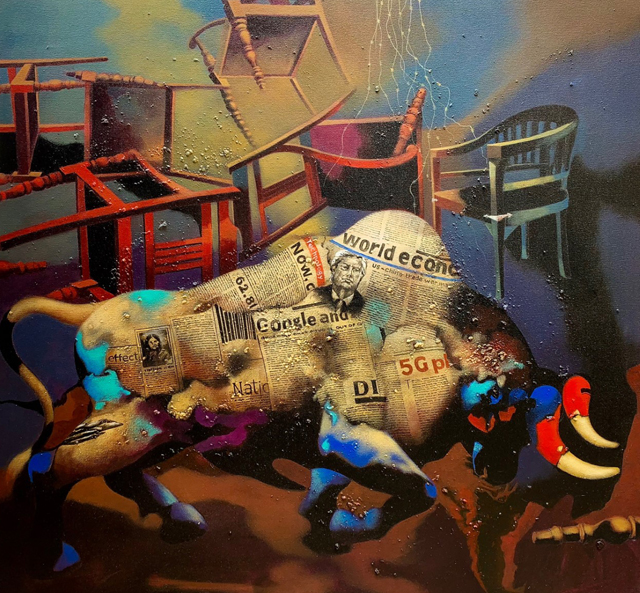 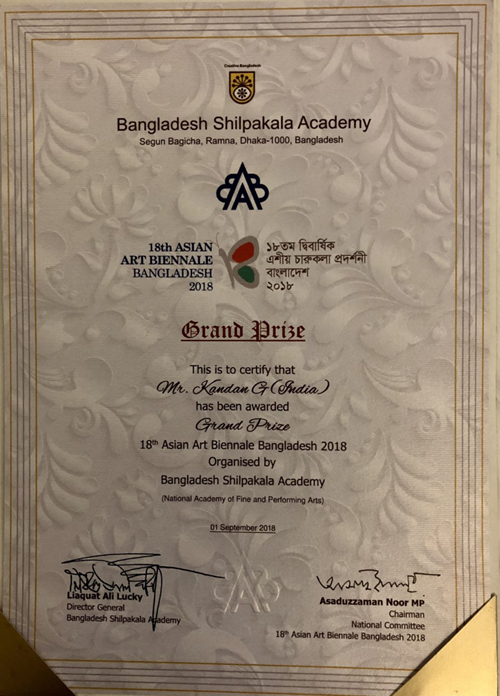 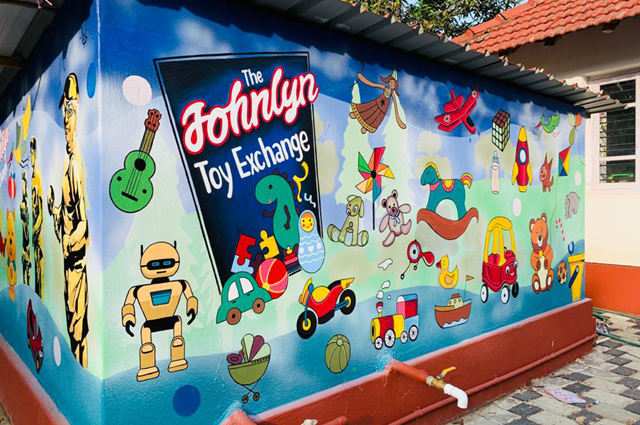 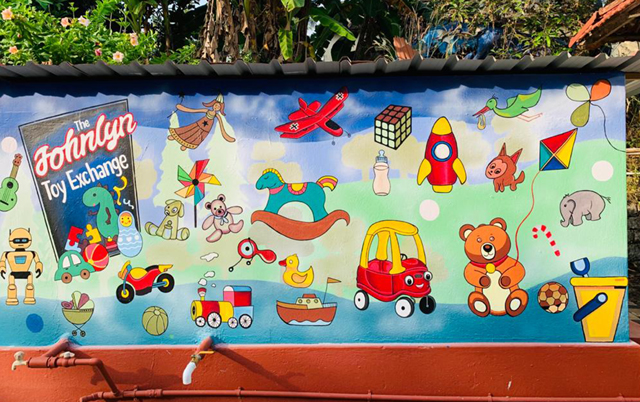 Paintings to control bladders and bowels

Then I was witness to a twist in wall painting tale when I was a post-graduate student at the downtown campus of Bombay University. At the south end of the campus was/is Jahangir Art Gallery. Nearby at the end of Rampart Row, Ador House was host to Progressive Artists’ Group, comprising the likes of MF Hussain, HS Raza, FN Souza and KH Ara, the last known for his shocking nudes. Some of these artists used to lounge around the entrance of the Jahangir Art Gallery on charpoys. The upcountry buses used to disgorge their tourists to Prince of Wales Museum (the name then) nearby and Gateway of India, a little walking distance away. As soon as the tourists left the buses, they would empty their bladders, and some also their bowels, on the wide footpath and compound wall of the museum. The sight and stink was unbearable.

One day, a disgusted Ara, followed by his artist friends, cleaned the compound wall of the museum and painted it with gods, goddesses and symbols of various religions. There was a frenzied painting of outer walls of buildings, facing the streets or lanes, in the rest of (then) Bombay. The tourists stopped emptying their bowels and bladders and the disgusting sight and smell stopped for a while in Bombay. But, after a few weeks the relieving of bowels and bladders returned to the whole city – never mind the painted gods and deities. That is where divinity was defeated by the bloating bowels and bladders. This was the end of a new genre of wall painting!

The poetics of the media emerge as the prominent keynote in Kandan G’s paintings. The people and the media play a crucial role in shaping the destiny of society. It is a fact that we get to know the events around us through media and to a large extent are forced to believe it too. The crow is a predominant feature in the current series of Kandan’s works and acts as a symbolic metaphor. The crow, as a messenger in the time bygone, is taken as a reference point for the media. Its role as the communicator between the abstract and the real is too well known.

The paper rocket illustrates the speed at which information and news is disseminated. The railway track, another symbolism in the series, is also about the ease with which people can commute from one place to the other, forming stronger human relationships. But the circumstances in the current society made chaotic - making all things around challenging. There is mystery surrounding almost all kinds of political and public dispositions. Kandan’s paintings hold a mirror to media, politics andsociety.

The drawings, in a sharp contrast, offer another dimension of human existence. The desirability of overcoming inequality in every sphere emerges as the key point. The disposition of the limbs and posture of figures constructs a silent dialogue ranging from harmonious elegance of pure affection, to heightened peak of sensual desire or extreme emotions?at times. The trials and tribulations that go on within are never seen externally. The happiness, melancholy, enragement is brought out in distorted body forms. The female’s roles as a form of Shakti is alluded to in the drawings. The spirituality, quest for knowledge, relationship between human and nature, connection with the unknown, the philosophy of Buddha make a statement in his drawings. The nude gives a divine feeling to the human figure. Nude is about divine and pure. The nude postures allude to the spiritual as is depicted in the Kajuraho temple. The forms of figures range from realistic and semi-realistic.

The artist has worked in different media using- Acrylic on canvas, mixed media on wooden board with minimum colours. The canvasses and drawings collectively unite.

Creative artists like painter, Kandan G have their senses attuned to unusual stirs in nature and react with their creative energies on canvas as reflected in the expressive painting on corona featured alongside.

Who is Kandan and what else has he got to showcase?

A text and visual offering by William Pais and John B Monteiro – Admirers of otherwise low-profile Kandan.

'A prophet is not without honour, except in his own country, and among his people and in his own house' – Mark 6:4 – in the New Testament of the Bible.

This statement of Jesus is confirmed by the experience of Kandan G, a self-taught veteran painter struggling in the back-lane of Mangala – Panjimogaru – where he has his studio in his modest residence. The high point of his painting career is winning a foreign biennale first prize. For the uninitiated, biennale (pronounced binnale) is Italian for biennial (every two years) of an exhibition of paintings and other art events. The award citation reads: 'Bangladesh Shilpakala Academy. 18th Asian Art Biennale. Bangladesh 2018. Grand Prize' (citation alongside).

'Painting is concerned with all the 10 attributes of sight; which are: Darkness, Light, Solidity and Colour, Form and Position, Distance and Propinquity, Motion and Rest' - Leonardo da Vinci (1452-1519), known for art (painting, drawing, sculpting), science, engineering, architecture and anatomy. Famous painting: Mona Lisa. Famous quote: 'Simplicity is the ultimate sophistication'.

These components of paintings and philosophy were, and are, alien to Kandan. Even before migrating to Mangaluru, while his family was in Dharmapuri district of Tamil Nadu, Kandan had started painting using charcoal as the medium. Thus, he was a self-taught and self-motivated budding painter before coming to Mangaluru where he started with wall-painting and for Yakshagana posters. In 1980 he transited to full-time art painting. He held his first solo exhibition at Prasad Art Gallery in 2007.

Incidentally, Kandan has high regard and respect for Prasad Art Gallery, the pioneering art gallery, which encourages and patronizes budding artists.

Kandan’s self-learning was supported by his participation in state and national-level art camps all over India (and some abroad). These five-day camps in India provided travel cost and accommodation – Plus money for out of pocket expenses. He also managed to send his paintings for exhibitions in Cambodia, Malaysia, Indonesia, Bangladesh and Turkey.

This established his identity beyond India. His painting style is recognized by art aficionados, also beyond India, even if he did not sign his paintings as is common in the art world.

Talking of signature, it has an intrinsic value of its own. There are stories about famous painters, perhaps apocryphal, of exploiting their signatures in various ways. There are whispers about a famous painter keeping the framed canvas against a wall and dipping the house-pet monkey’s tail in a paint jar and letting the monkey mess up the canvas with its tail. The resulting canvas frames were duly titled and signed by the painter. He had imitators who spread and secured the canvas on the floor. A nude model was engulfed in paint all over her body and pushed gently over the canvas on the floor. The resulting images, depending on what impression was made on the spread-out canvas were duly titled and signed.

Incidentally, Jesuit Brother Antonio Moscheni, who painted the walls and ceiling of St Aloysius College Chapel 119 years ago, now a tourist attraction, did not sign his paintings, though before coming to India from Italy he had also rendered stand-alone paintings, including nudes.

My own tryst with Kandan was through an introduction from William Pais, joint author of this text-cum-visual feature and owner of perhaps Mangaluru’s leading art centre – Orchid Art Gallery. First started at Bikarnakatte, it shifted to Balmatta Road and is a landmark for those interested in paintings. He introduced me to Kandan when I needed to paint the exposed white walls of my 10,000-litre above-ground-level water tank, next to the Toy House which stores toys donated by enlightened citizens to be presented to deprived children in orphanages under the auspices of three-year-old Johnlyn Toy Exchange. Thus, the main theme of Kandan’s paintings here is toys and their presenters. William briefed the artist and oversaw the execution for me.

Before reverting to Kandan, two more views of paintings are interesting, if not provocative. For Ambrose Bierce (1842-1914), American short story writer, journalist and poet, painting is 'The art of protecting flat surfaces from the weather and exposing them to the critic'. For Pablo Picasso (1881-1973), Spanish-born painter, sculptor and poet who spent most of his adult life in France: 'Painting is a blind man’s profession. He paints not what he sees, but what he feels, what he tells himself about what he has seen'. Incidentally, Pablo has one of the longest names: Pablo Diego José Francisco de Paula Juan Nepomuceno María de los Remedios Cipriano de la Santísima Trinidad Ruiz y Picasso.

Though the media let down Kandan by not properly projecting the winning of one of the three grand prizes in Dacca, Kandan has reconciled himself to the realities of life and moved on. He gratefully remembers Rohan Monteiro, leading builder of Mangaluru, for buying many of his paintings. He also recalls the encouragement by Nayana Fernandes, lately president of the Catholic Association of South Kanara. She organized a one-day painting exhibition at Mallikatte where many artists sold their paintings.

While on these two art patrons, Kandan says that in Mangaluru, Christians are at the forefront of art patronage. He says that Mangaluru is not a hot market for paintings. But those who invest in paintings will see the value of their acquisitions growing over the years. Kandan’s paintings, which are recognized by their unique style by art experts, are moderately priced – Rs 1 lac+ for 48” x 48” and Rs 25,000 and above for 24”x 24” size. Kandan says he uses high-quality paints to ensure long, undiminished life which can be further extended by spray-cleaning. Kandan says that the Government should set up an art gallery in Mangaluru so that artists can display their paintings and facilitate artist-buyer interaction.

We started with the Biblical quote about a prophet being not honoured 'in his own house'. In the case of Kandan, his two sons have shown by their action that they honour their father’s profession and work. While Kandan had no formal education in art and is self-taught (as to basic education he had done his Matric-level in Hosur), his elder son, Deekshith, 26 years, has done a Master of Art degree from Davanagere University. His second son, Ashwath, 25 years, has done Interior Design from Karavali College and both are much in demand for commercial art free-lancing. They, along with other acolytes of Kandan, helped in executing the water tank wall surface painting commissioned by me.