Affirmations can Change your Life

A monk and his disciple were passing through a forest when they suddenly heard a lion roar in front of them. The disciple was frightened and wanted to run away, but since he had been practicing positive thinking, he was able to control himself and asked the monk, “What shall we do Master?" The monk answered in a calm voice: "There are many options. We can fill our minds with paralyzing fear letting the lion do with us whatever pleases it. We can faint while praying to God to save us. We can run away, but then it will run after us. We can fight with it, but physically it is stronger than us. But I choose to influence the lion with the power of my mind.” 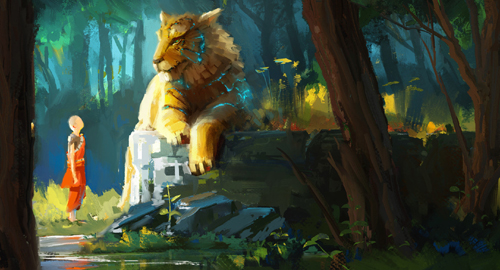 The monk turned his gaze fearlessly toward the lion, emptied his mind from all thoughts and entered a state where he embraced everything in the universe, including the lion. In this state, the consciousness of the monk became one with the consciousness of the lion. After a while, the disciple who was trembling with fear saw that the lion gradually lowered its head and tail and went away. The monk told the surprised disciple that he had just cleared all thoughts from his mind and united himself in spirit with the lion. The lion sensed the inner calmness, peace, and unity and felt no threat or need to express violence, and so walked away. "When the mind is silent and calm, its peace is automatically transmitted to everything and everyone around, influencing them deeply," concluded the monk.

This is true with each one of us in our life. We can think of all the challenges and threats in life as the lion who is in front of us. We can choose to be like the disciple and tremble with fear planning to run away or to be like the monk and drive away the LION by using the power of the positive mind.

The power of the spoken word or the thoughts (unspoken word) should never be underestimated. A single spoken word or lone thought can plant a seed in the brain. If nurtured, over time with more of these thoughts or words can grow and manifest into an actual reality. As per the new thought philosophy, the Law of Attraction is the belief that positive or negative thoughts bring positive or negative experiences into a person's life. The Law of Attraction is the ability to attract into our lives whatever we are focusing on. It uses the power of the mind to translate whatever is in our thoughts and materialize them into reality.

This means whatever can be imagined and held in the mind’s eye is achievable if you take action on a plan to get to where you want to be. Who you are and your current life circumstances are all a result of your past thoughts and words heard. Your very beliefs and values are a by-product of all that you have currently lived through. Just ponder. Isn’t it true that throughout our lives, we have allowed others to tell us who we are instead of choosing for ourselves. It’s true that from childhood, we have been told that we are shy, lazy, unintelligent, overweight or unorganized. These affirmations from others would have undoubtedly had a significant impact on how we grew up to be and how we perceive ourselves now as an adult. Having said this, the power of repeated thoughts and words can also be harnessed for positive manifestation.

When we come to the empowering realization that we are able to create, whatever we want through our thoughts alone, we have the exciting opportunity to transform our lives and enjoy a lifestyle that we had previously never imagined possible. When change is needed in your life, it should all start with your thoughts. When we repeat an affirmation to ourselves, be it loud or in our mind, our mind is re-trained to begin to see these affirmations as absolute truth. This helps to manifest them into a reality.

Now that you have come to know the astounding possibilities that life has to offer us, we realize that we are like artists. We are creating pictures of our intended life and then making choices and taking actions that will realize what we envisaged. So what if you don’t like the picture?

By Dr R G D’Souza
Dr R G D’Souza is the principal of Yenepoya Institute of Technology, Moodbidri.
To submit your article / poem / short story to Daijiworld, please email it to news@daijiworld.com mentioning 'Article/poem submission for daijiworld' in the subject line. Please note the following:

Title: Affirmations can Change your Life