“I strongly believe that missionaries make better products. They care more. For a missionary, it's not just about the business. There has to be a business, and the business has to make sense, but that's not why you do it. You do it because you have something meaningful that motivates you.” -Jeff Bezos (b.1964), American internet entrepreneur and founder, CEO and President of Amazon Inc.

Not all agree with Jeff Bezos. One such disagreement, the latest, comes from Union Minister Giriraj Singh who said on January 2, 2020 at Bagusarai, UP, ”Students who go to missionary schools qualify for IIT and become engineers, but when they go abroad most of them start eating beef because they do not know about our sanskar and sanskriti.” (traditional values and culture). 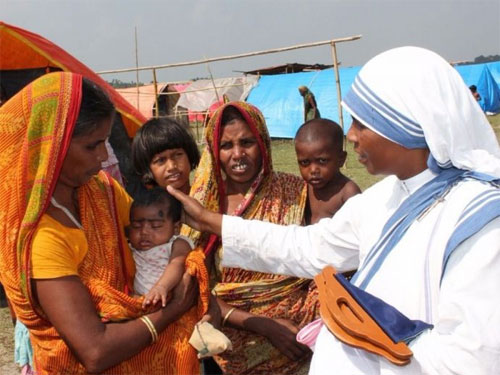 Contrast this with what Deepak Chopra, India-born American author, perhaps the best-known human export from India, has said: “When I was growing up, I went to an Irish-Christian Missionary school”. So have generations of Indians who did not necessarily end up eating beef. The fact is there are no missionaries in India any more. But, we invent them to whip them verbally and please the gallery of bhakths’.

Take the case of Karnataka, where people and politicians are better educated and more balanced. There has been a running debate in Karnataka on the medium of instruction – Kannada Vs English. The English medium lobby has apparently come up trumps. In recent public discourses, politicians, instead of talking about English medium schools (mainly church and convent-run), now talk about 'missionary' schools because it is an emotive word like cow slaughter and cow protection. The dictionary says that missionary is a person sent by a church into an area to carry on evangelism or other activities as education and hospital work. Such sending has stopped long ago as far India is concerned. Even Pope Benedict XVI, who headed the Papacy from 2005 to 2013 when he resigned, has conceded: “If it is true that the great missionaries of the 16th century were convinced that one who was not baptized was lost - and that explains their missionary commitment . In the Catholic Church after the Second Vatican Council, that conviction was definitely abandoned.” The Second Vatican Council, held between 1962 and 1965, addressed the relations between the Catholic Church and the modern world.

The current verbal missionary bashing is the latest; but not the first and there have been cases of anti-“missionary” action. One such was reported in the media on August 14, 2018. The Jharkhand government was to cancel the license of seven children’s homes run by Missionaries of Charity in Ranchi. The Ranchi DC had ordered a probe into the children’s homes run by Missionaries of Charity. The district officials inspected the homes and recommended action as these homes allegedly did not follow the norms.

It was then said that the action against the nuns was to drown the noise over extensive rapes in children’s and women’s homes (non-Christian) in Bihar and UP. This was a diversionary tactic to avoid focusing on the rapes over which the Supreme Court anguished on August 11, 2018. It had expressed serious concern over cases of rape and sexual abuse of women at shelter homes in Bihar and Uttar Pradesh and asked when these horrific incidents would stop. The top court’s observation came while hearing a matter relating to sexual abuse of children at orphanages.

“Tell us what is this happening?,” a bench of justices Madan B Lokur, S Abdul Nazeer and Deepak Gupta said while referring to the recent (then) incident at Pratapgarh in Uttar Pradesh where 26 women had been reported to be missing from shelter homes. “Yesterday, I read so many women have been raped in Pratapgarh. How will these things stop?” Justice Lokur asked, adding “When it is going to stop?”

So, apparently, tweaking norms by ‘Missionaries’ attracts swift action while cases of rape are downplayed and linger. The fault lies in the ‘Missionary’ tag of Christians, though there is a long history of missionaries in the Indian-origin Hindu, Buddhist and Sikh religions on which a brief reference is made below.

Hinduism was introduced into Java by travellers from India in ancient times when the early Javanese princes accepted Hinduism. Shantidas Adhikari was a Hindu preacher from Sylhet who converted King Pamheiba of Manipur to Hinduism in 1717.

Historically, Hinduism has only recently had a large influence in western countries such as the United Kingdom, New Zealand, and Canada. Swami Vivekananda, the founder of the Ramakrishna Mission, is one of the greatest Hindu missionaries to the West. Modern-day Indian/Hindu guru Osho had more acolytes in Oregon, USA, than in Koregoan, Pune. So is the foreign reach of Here Krishna movement.

Guru Nanak Dev, whose 500th birthday is being currently celebrated, made four distinct major journeys, in four different directions, which are called Udasis, spanning many thousands of kilometers, preaching the message of God. Currently there are Gurdwaras in over 50 countries.

The first Buddhist missionaries were called ‘Dharma Bhanaks’, and some see a missionary charge in the symbolism behind the Buddhist wheel, which is said to travel all over the earth bringing Buddhism with it. Emperor Ashoka was a significant early Buddhist missionary. Buddhism was spread eastward to the present lands of (old) Burma, Thailand, Laos, Cambodia, Vietnam, and Indonesia.

So, missionary work and religious conversion are not the sole monopoly of Christians. Yet, the words ‘Missionaries’ and ‘Conversion’ evoke toxic negative emotions against Christians in India - the same way ‘Cow’ has a strong emotive image for Hindus

The Catholic Church authorities in India should dump the terms ‘Missionaries’ and ‘Conversion’ as these terms evoke toxic negative emotions among non-Christians. Much contemporary Catholic “missionary” work has undergone profound change since the Second Vatican Council of 1962-1965 with increased push for indigenization and enculturation, along with social justice issues as constitutive part of preaching the gospel.

In this historically changed context, the words ‘Missionaries’ has no relevance as the church service is offered by national priests and nuns. Even so, dumping of ‘Missionary’ and ‘Conversion’ should be consciously done and replaced by local terms like ‘Save’ (service) and ‘Sevaks’ – ‘Sevaks of Charity’, for instance, instead of Missionaries of Charity. Changing names to ‘Indianize’ them (Sanskrit, Hindi or any Indian language) should be consciously done by the church leadership. Indian corporates change their names to reflect change in their business mission or focus. Why not Indian church shed its toxic nominal legacy ‘Missionary’?

Title: Down with ‘Missionaries’