In the Holy Bible we read about the Miracle at Cana wedding (John 2:1-11). There Jesus calls his mother ‘Woman’ and from her inspiration performs his first miracle.

As we see around many women are working at home looking after their families. In the good olden days almost all the women living in villages were home makers. Many were illiterates. Families were also large with many children and of ‘joint family’ in structure with 3-4 generations living under single roof. Agriculture was the main source of livelihood. In this write up I am referring to one such woman – Christine Fernandes nee Nazareth – my mother-in-law (Mai), a resident of Mudarnagady in Udupi District. She was born on March 18, 1929 and on this (2019) March 18 she completed 90. 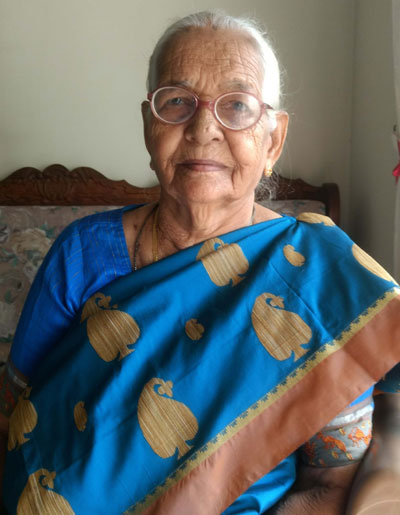 At present the average life span of a man in India is about 67 and that of a woman is about 70 years. As per statistics, about 30 persons in every 1000 are crossing 90th birthday. Out of them less than 10 remain in good health and the rest 20 are with poor health either at home or in hospital. Thanks to Almighty, Mai is enjoying good health to this date, she reads a lot, she can travel to near and even far off places. It is my privilege to narrate a few incidents of Mai’s greatness. At the same I would like to clarify that I am not going to narrate her biography in detail, but only giving a few glimpses of her life and they may not be in the order of occurrence.

I have a special reason to rejoice in Mai’s completion of 90 years. I had lost my mother at my age of 3 years and 3 months (My mother passed away during maternity, she was just 29) and since then I was deprived of calling ‘Mai’ (mummy). It is from the time of my marriage with Concepta, daughter of Christine and Raymond Fernandes, once again I got a chance to call ‘Mai’. I have understood through these years, how difficult it is to grow and live without mother.

On March 18, 1929, exactly 90 years back, Christine was born in Kalathur, then part of Shirva parish as the 4th child (among 5) to Lawrence and Angeline Nazareth. This family had education background as her maternal grandfather ran a school and uncle was a teacher of those times. Due to the prevailing mentality of those days that it is not essential to educate girl child Mai was forced to discontinue after 4th standard. Her marriage took place in May 1945 with Raymond Fernandes, a youth of Kemundel, Mudarangady parish, engaged in paddy cultivation. Raymond’s dad Anthony Fernandes was a teacher apart from a cultivator and even served as a sacristan of Kenha (Mudarangady) parish. Since entering the Fernandes household Mai had to work in the paddy fields, cattle rearing along with domestic affairs. As it was a joint
family and her husband was active in the village and in the parish, as social worker she had more responsibilities on her tender shoulders.

About 50-60 years back church teachings were considered to its fullest extent and families with more children was the order of the day. Church honours such couples. During those days India was not developed like today. Gender discrimination was prevalent. At present there is respect to and concern towards girls at par with male children. Government of India is popularising the slogan, ‘Beti Bachao, Beti Padhao’. But the situation was not as good in most part of the twentieth century. There was poverty everywhere. The condition of Raymond-Christine couple was just hand to mouth. But they knew the importance of education. With several hardships they educated their children without discrimination. Because of their positive attitude towards education they braved poverty. Their sufferings of yester years have fetched bounty of fruits in the later years. 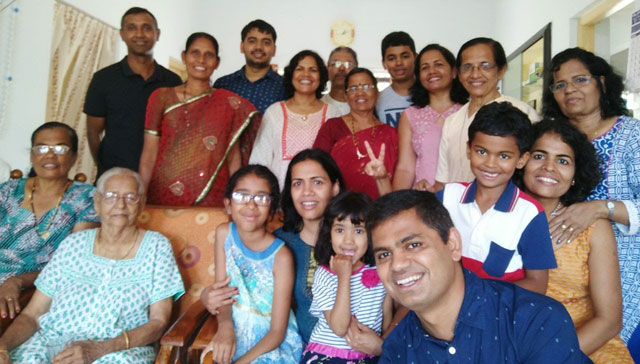 Today children of Raymond – Christine couple are well settled. This family has two religious sisters – Sr Jyothi and Sr Ivy (both Ursuline Franciscans serving in Mysore Province), two post graduate medical (Alopathy) doctors – Dr Hilda (Fr Muller’s Mangaluru) and Dr Nancy (United Kingdom), one engineer– Janet (Germany), two post graduates- Concepta (Mangaluru) and Charles (Dubai). Two teachers – Catherine (Nakre) and Rosa (Mumbai) both now retired. Pascal retired from the services of Grindwel Norten Ltd, Uran, Mumabi. Angeline (Mudarangady), Vincent (Kuwait), and Jacintha (Mumbai) are doing well in their respective fields. Because of the stand taken by Raymond-Christine couple in educating their children even in their poverty, today this family is standing tall as one of the most educated families in variety of fields, perhaps in the entire Udupi district and diocese. The sons-in-law have made a name in their respective fields - George Castelino (Nakre), Gregory D’Souza (Mumbai), Ignatius Castelino (Mudarangady), Dr Clement D’Souza(Fr Muller’s, Mangaluru), engineer Srikanth (Germany), Dr Jaiprakash (UK) and myself from Pangala. Daughters-in- law are Philomena (Mumbai), Deena (Mudarangady) and Thelma (Dubai). Raymond-Christine are blessed with 19 grandchildren and four great grandchildren. Raymond is no more to see the glory of his children as he passed away in 1998.

Mai has flair for reading and to gather knowledge from newspapers, periodicals, books etc. She reads the leading Kannada newspaper of the region every day. She is the subscriber of almost all Konkani periodicals and she reads them throughout the day. She reads Konkani and Kannada novels and other books and is familiar with almost all authors of Konkani. She regularly watches a few Kannada-Konakni channels on TV.

Regarding Mai’s passion for reading Concepta explains: “Mai’s reading habit started from her younger days and she has retained the same enthusiasm even today. My grandfather was one of the early subscribers of Raknno weekly which started in 1938 and our family has never missed a single issue since then. Even today Mai subscribes it.”

With a thankful gesture Concepta narrates her parents sacrifice in the academic achievement of self and her siblings. “Sometimes Baab and Mai could not manage school fees and other expenses of all the children especially during admissions. Baab would approach some wealthy people of the village (who were not farmers) for some loan and promise to supply them with good quality rice after the harvest season (October-November). Many a time some of them had suggested him to discontinue the schooling of daughters and engage them in agricultural activities or some work elsewhere. Undeterred, Baab would respond in a firm voice that he was not seeking their advice, but some advance if they wished to. Of course, all the children contributed their bit in agricultural activities and domestic work even while pursuing higher education and employment.” 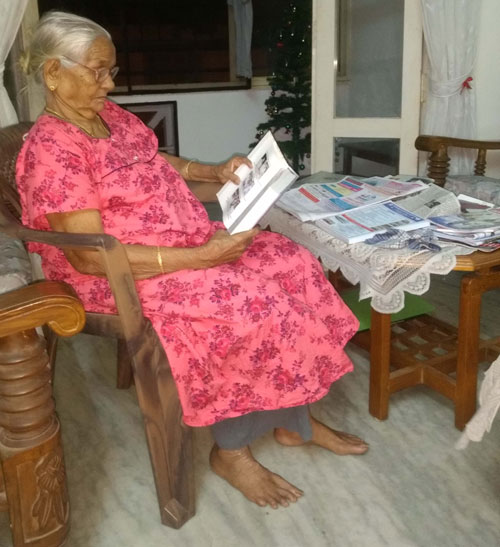 Concepta further recollects: “During our school / college days we all had benefitted from Mai’s reading habit. We had no electricity until 1980. We had to study in the light of kerosene lamps. During exam time Mai too was sitting with us till late night reading Konkani periodicals or Kannada novels which we used to borrow for her from school library. Sometimes we would fall asleep, she would still continue to read for hours together or until Baab asked her to put off the lamp. It is due to Mai’s support and encouragement that we siblings have developed reading habit and because of Baab’s determination all children have done well in academics and in life too. Even at 90, Mai reads for long hours and with pleasure I take some books / special issues for her regularly and she awaits my visit like a child craving for sweet meat. She was educated only upto 4th standard but her knowledge is vast in several fields including Konkani literature, religion and even politics. How many such elderly people we come across who are voracious readers at the age of 90?”

Even today Mai visits her children and relatives in Mangaluru, Nakre and elsewhere. Mai had visited Dubai in 2005 and UK in 2008. There too she continued her reading activity adapting herself to reading online Kannada newspapers on laptop, scrolling the pages with ease. Relatives and neighbors are surprised to see how comfortably she uses her cell phone at this age.

Mai was actively involved in paddy cultivation apart from growing vegetables and rearing cows until she was almost 80. Thereafter there was no manpower available to continue paddy cultivation and hence she concentrated on cows and growing vegetables in organic method until recently. Best part of her vegetables story is that she loved distributing them among neighbors, relatives and whoever visited her like health workers, postal staff, etc.

Some years ago the agricultural land of the family was acquired for the establishment of Udupi Power Corporation (UPCL), now managed by the Adani Group. At present she is living in the housing site provided by the corporation at their township since a year. There also she is actively engaged in reading, visiting her neighbors etc. Being the oldest living person in the Township she garners respect and reverence from the residents. In March 2017 she was made to inaugurate the drinking water facility in the Township and was felicitated in the presence of Kishore Alva, the head of UPCL. She was the chief guest of the New Year 2019 function in the township and gave away the prizes to the winners of various competitions. 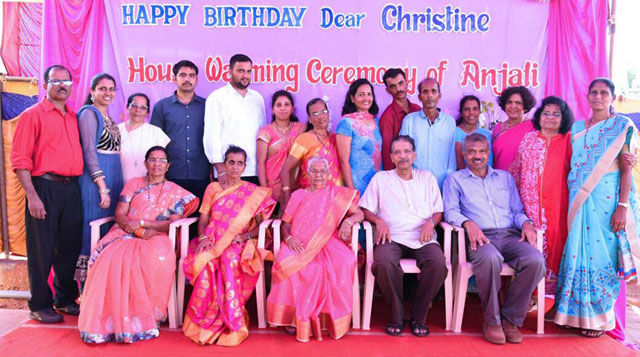 Christine Fernandes on her 89th birthday

Mai attends Sunday Masses and other programmes at Mudarangady Church and elsewhere. She recalls the days when she volunteered for the construction work of Mudarangady Church. She was honoured among others during golden jubilee of the church building.

Concepta is the 9th child of the couple. Sometimes I tease her regarding her position in the family. She hits back: “If my parents had planned their family like present times, how could you get me as your wife?” As Concepta is my perfect choice for a soul mate I too agree with her. My daughter too sometimes irritates her mom: “You are so lucky to have many sisters. I don’t have any.”

I do not think nowadays there are such large families with many children to a single couple. Also, there may not be many nonagenarians with good physical and sound mental health who are active in their routine, who can read newspapers, books etc. In that sense Mai is lucky and God Almighty has been compassionate and generous to her.

With joyful heart and gratitude I take this rare opportunity to extend happy 90th birth anniversary wishes to dear Mai. May God continue to keep her in good form and grant her to cross a century and celebrate many more happy and healthy birthdays.

H R Alva
To submit your article / poem / short story to Daijiworld, please email it to news@daijiworld.com mentioning 'Article/poem submission for daijiworld' in the subject line. Please note the following: