“Shhhhhhh,” went the wok as mustard seeds, dry red chilis and curry leaves dived into a pool of hot oil. A heart-warming, taste-bud-tingling aroma wafted out the black framed-window, stirring up emotions aplenty throughout the neighbourhood.

It was a typical Sunday in Lata’s, or as she was more commonly known, Mrs Rao’s house. Sixty-five-year-old, Lata Rao was a retired teacher and lived alone in her flat tucked away in Mumbai’s Western Suburb. A tall, lean, sari-clad figure with beautiful hazel eyes and carrying a top-knot of silver and black on the crown of her head, she spent her day reading, cooking, cleaning and watching her favourite TV serials. A disciplinarian, she woke up at five every morning and went for a brisk walk on the track laid down in the housing society’s premises. 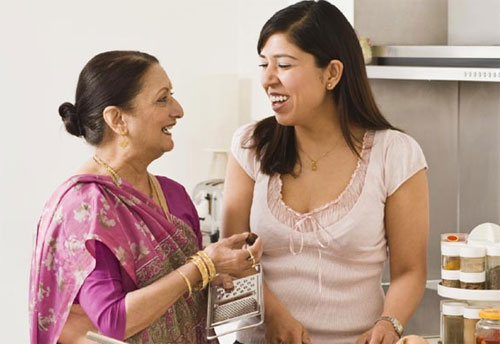 Despite living most of her adult life in Mumbai, Mrs Rao was strongly attached to her Mangalurean roots and revered her idlis and dosas. In fact, her white coconut chutney was the stuff of legend. Everyone who lived in Anand Bhavan’s B Wing was a fan of this signature dish. While they usually salivated sitting by their windows, sometimes they popped by for a taste and Mrs Rao generously indulged them.

“What’s so special about your chutney?” asked Rashmi, Mrs Rao’s daughter, mopping up the last bit of coconutty goodness in her thali with paper-thin neer dosa. A short, bespectacled young lady with straight hair and a dusky complexion, Rashmi worked in Dubai and was currently visiting.

“It is nothing, maa,” replied Mrs Rao not lifting her gaze from the lady’s finger she was cutting.

“Come on, mummy! There has to be some secret ingredient or trick. Which is it?”

“Stop giving such beauty contest answers, mummy. Of course, you put a lot of care into your dishes but I am sure there is more to it.”

“No, there is not,” insisted Mrs Rao. “It really is love.” Seeing that Rashmi was not convinced, Mrs Rao set her knife aside and said, “Let me tell you a story. This happened when I was about your age. One day, I was strolling behind our building, like I did every evening, and noticed something green peeking out of the mud. Remember the kuccha ground behind our building where you kids used to play?”

“I went over to investigate,” continued Mrs Rao, her eyes gleaming just like they had when she discovered the coconut sprout. “Someone might have left it behind after their puja but nature never wastes an opportunity. Such a valuable lesson, is it not, maa?”

“Andhaa, mummy. Then what happened?”

“I noticed the young shoot was dying. I felt really bad for it, maa, and so, I went upstairs, got a bucket of water and quenched its thirst.” Saying this, Mrs Rao stopped talking. Rashmi watched her mother lost in thought. She was eager to know more but said nothing.

A crow swooped down and perched itself on the window sill. It was a regular visitor, well-nourished by a steady diet of fish and chicken bones from Mrs Rao’s kitchen. “Oh! I almost forgot about you,” she said as she went inside the kitchen to whip up a meal for her guest. Foraging for leftovers from the fridge, she created a cling-clang symphony with her pots and pans.

“Caww, caww.” But the crow was not the only one getting impatient.

“Then what happened, maa,” Rashmi shouted, trying to stay above the clanging and cawing.

“Ah! This continued for many years, maa,” said Mrs Rao, emerging from the kitchen with a worn out steel katori of chicken bones and liver. “Every evening, I carried a bucket of water down three flights of stairs. The neighbours watched, intrigued and possibly a bit confused, but no one offered to help. Not that I was expecting them to. Is it not strange, maa that we consider the coconut a sacred fruit and venerate it as an image of God but don’t tend to one dying right in front of us?” Once again, Mrs Rao fell silent, giving a guilt-ridden Rashmi who had ignored an online petition to save Aarey Milk Colony’s forest cover, enough time to collect her thoughts. “What are you thinking, maa?”

“Nothing, mummy. So, that tree behind our building is the same coconut sprout you saved?”

“Yes, and the coconuts you have been tasting in the chutney are nature’s love.”

“But why does everybody use the coconuts from that tree when you are the one who watered it for all those years.”

“Nature always gives, maa and we must strive to emulate this generosity. There is no difference between us and the rest of creation; we are one. If we harm another, human, animal, tree or river, we harm ourselves.” Saying this, Mrs Rao got up, straightened her sari and headed back to the kitchen. “Bhindi and roti okay for lunch, maa?”