"Education gives you lights to see, wings to fly and music to sing" - is the famous quote attributed to well-known American physician, philosopher and poet-seer Dr Debashish Mridha. This quote fits perfectly to Dr Narayana Bhat Hosmane who used education to come out from the shackles of poverty and reach the pinnacle of success globally. His accomplishments in the field of Boron Chemistry in finding a possible cure for all kinds of cancer is creating quite a sensation the world over.

Dr Narayana Bhat overcame many obstacles including poverty to make a name internationally in the field of Chemistry and also as a scientist through his path breaking research in the field of cancer. He did not allow his rural background or poverty to falter his confidence to accomplish this rare feat. Though his varied accomplishments may not be known to many Indians, Dr Hosmane is an internationally revered, recognized and respected scientist with manifold achievements. 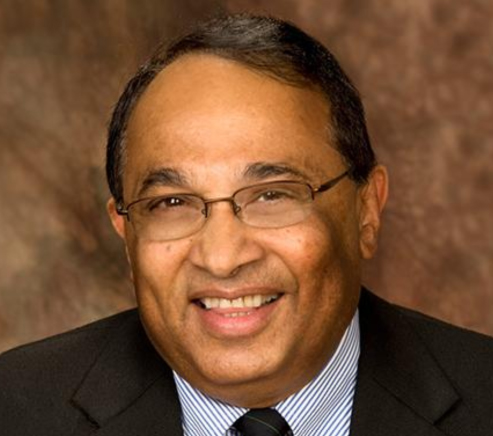 Hosmane has many firsts to his credit including being the lone foreign student to be awarded the scholarship of Scotland’s Edinburgh University. Credit goes to him for changing the trajectory of the boron chemistry research by converting it into a more popular cancer research in the US combining it with nanotechnology. Five of the books he wrote have been acclaimed internationally which speak volumes of his stupendous achievements.

Dr Hosmane who celebrated his 70th birthday in June 2018 added another feather in his cap when the Journal of Organometallic Chemistry, a well-known periodical from the US, dedicated a special issue in June 2018 in honour of this great achiever who has a record of more than 350 essays to his credit in the field of Boron Chemistry. The editorial of the special issue of the journal calls him a ‘rare scientist’ for his pivotal role in setting up the Boron Research Institute in the US. He has been the recipient of awards from more than 25 countries for his contributions in the field of science. 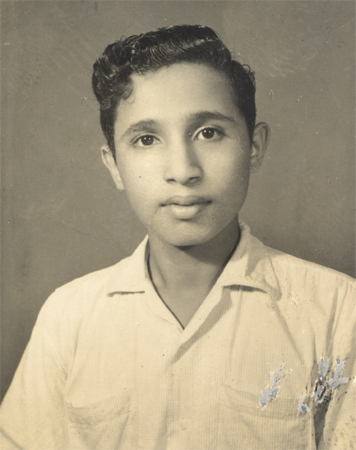 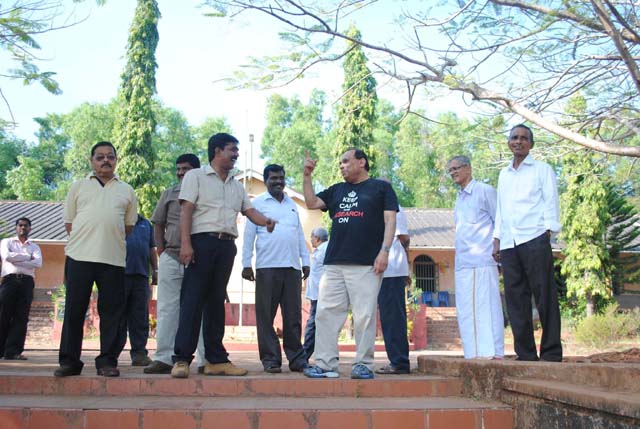 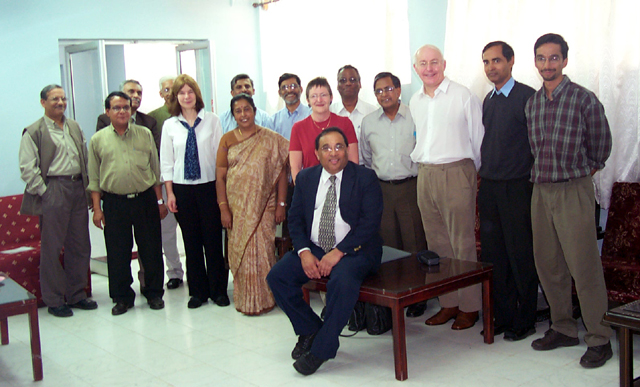 With Members of British Consulate at University of Hyderabad, 2004

With Mother Teresa in Kolkata, 1994 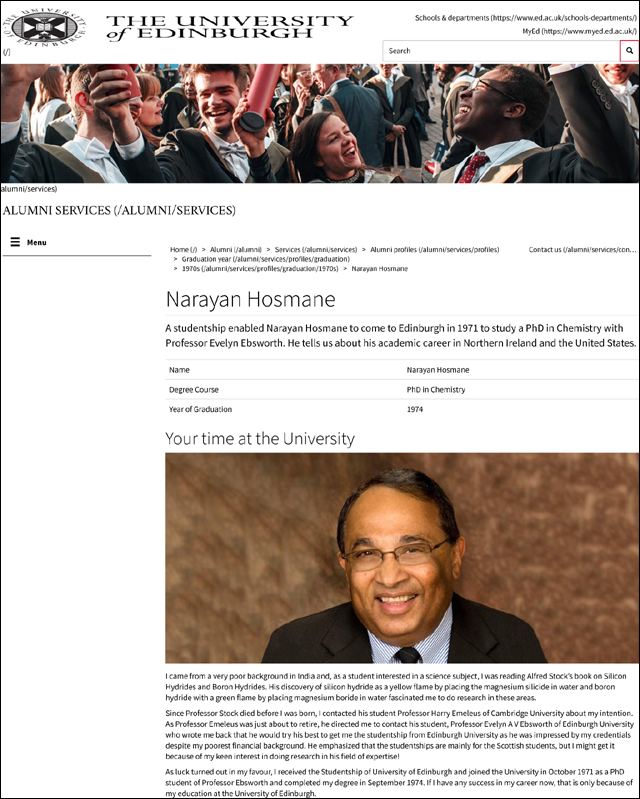 Narayan Hosmane featured in the University of Edinburgh website

Dr Hosmane who moved to the US in 1976 is presently a special researcher at the Illinois University. Despite his advancing age he has no plans to retire and wants to continue his research till he reaches his goal. He says "I will be the happiest person if I am part of the team that is able to find a complete cure for cancer."

Dr Hosmane enthusiastically recalls his childhood days in Gokarna, the days of poverty, his early schooling and how education changed the course of his life making him what he is today. Though it is more than 45 years since Hosmane left Indian shores he speaks in chaste Kannada and also in local Konkani - courtesy his wife whose mother tongue is Konkani. "The 23 years I spent in India are the best days in my memory lane – full of energy, uncertainties of life, dreams and hopes for the future. On hindsight I believe the poverty of the early years gave me the strength to be what I am today," recalls Dr Hosmane. Despite his enormous success, at heart he still remains a small town boy full of memories of his early days spent in the small town. Even today he is in regular touch with his class and college mates.

Poverty was not a stumbling block as he followed his dreams. He quenched his thirst for knowledge by reading books, a hobby which he cultivated at a young age. "As my mother used to come home late after working in many households I used to go to the nearby library to read as I had spare time till mother came home. Here I always read science books as they provided answers to some of the questions that cropped up in my mind," recalls Dr Hosmane.

Falling in Love... With Chemistry

Dr Hosmane’s journey from Gokarna, a small temple town of Uttara Kannada to become a top notch scientist is both fascinating and inspiring. He did his primary education in Gokarna and high school from Bhadrakali High School. He completed his BSc degree in Chemistry with Botany from Kanara College Kumta, commuting almost 12 km to and fro daily. His love affair with Chemistry began at this college because science students in this college had no other choice but to opt of chemistry as a major subject. Of course, this love affair had its genesis elsewhere. To quote him: "In Gokarna during summer we used to go to the sea-side to sleep at night and I was greatly fascinated by the stars in the sky. The star-laden sky used to take my mind into a fascinating world and that got me interested in science. Even the sea waves made me think kindling my interest in science field." 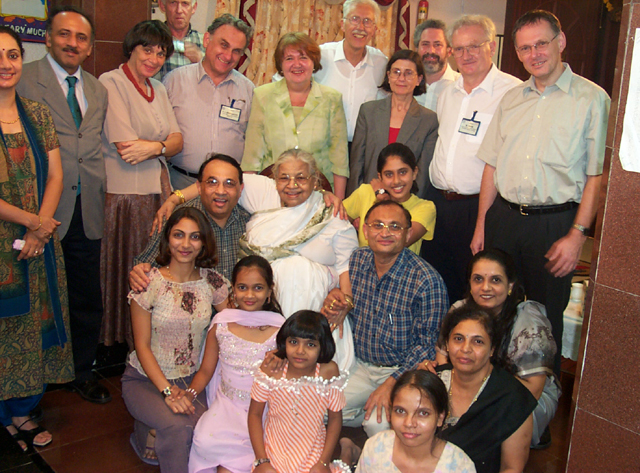 With his mother, family and delegates in Mumbai, 2003

He likens his love for Chemistry to Indian traditional arranged marriages. "In traditional Indian marriages the couple first gets married and then they fall in love. My love for Chemistry can be likened to Indian arranged marriages. I had to opt for Chemistry as I had no other alternative and then I just fell in love and the bonding is still going stronger with each passing day". In fact Dr Hosmane also settled for an arranged marriage in real life and he saw his wife for the first time at the airport just a day prior to the wedding. His wife Sumathy, he says, has been the pillar of strength to him. "My wife’s constant nagging which later turned out to be a great support, has played a major role in my success making me what I am today," he fondly avers.

Dr Hosmane went to Dharwad for his post-graduation in MSc and came out with flying colours securing a gold medal. His academic excellence fetched him a scholarship at the Edinburgh University in Scotland. He moved to Scotland in 1971 from where he completed his PhD in just two and half years. With this scholarship Hosmane created history as he became the lone foreign student to be awarded the scholarship by the Edinburgh University. He saved a part of the stipend he got as a scholarship student to send it to his family back in Gokarna. In 1976 he moved to USA and after serving in various institutions he finally joined the Northern Illinois University in Chicago in 1998 where he continues to be a Research Professor of Chemistry and Biochemistry conducting cancer research.

The memories of those early days of his struggle are vivid in the mind of Dr Hosmane who recalls that he had to write on the floor and memorize his school lessons as his parents could not afford to buy him note books. Hosmane still remembers the taste of the stale (sour) food he used to eat as a child. "My mother used to work in the neighborhood households and she used to bring the leftover food given by them. She used to work in many households without coming home in between. Gokarna is known for its scorching heat in summer and by the time my mother came home the food used to become gluey and rancid in taste. We had no other choice but to eat that food and over a period of time I almost developed a taste for it," says, Hosmane. So much so, a few years back when he came to Mumbai and his mother asked him whether he would like to eat like her to cook any of his favorite foods, Hosmane asked his mother that he longs to taste the gluey and stale food was used to eating as a child. It is a poignant reminder of the kind of impact poverty can have on the impressionable minds. Hosmane remembers the names of his school and college mates and friends with whom he shares a close camaraderie and also remembers most of the incidents of his school and college days.

Apart from his academic excellence Dr Hosmane proved his mettle as a quick learner even in fields which he felt was not his forte. For example Hosmane was lured to play squash with John Sawage who was his batch-mate and was studious like Dr Hosmane. In Edinburgh Hosmane’s landlady had advised him to have bath once a week because bathrooms in Edinburgh are like half size bath tubs. Dr Hosmane was used to Desi style bathing. So when he spoke about it with John he advised him to join him to play squash as it entailed a hot water shower after playing. Having taught Dr Hosmane how to play squash one day John challenged him to beat him, which he did and that is when John first nicknamed him as "wonder boy".

The title became popular when Dr Hosmane once again showed his acumen. Learning German was essential for students at Edinburgh University for their PhD which requires translations from German to English. John Sawage who had joined German classes was struggling with the subject. Dr Hosmane had plans to study German in the second year. When he glanced John’s German text book out of curiosity he felt German was easy because of his Sanskrit background. "German originated from Sanskrit and hence with my Sanskrit background I found it easy. I answered the exam without attending any classes and was the only one among the 14 to pass and that too with distinction," recalls Dr Hosmane. With this achievement he became the eternal "wonder boy" for his batch mates.

Dr Hosmane kept his ‘wonder boy’ image and has been able to make remarkable headway in pursuit of his dreams. It is these dreams that keep him going. Despite his stupendous achievements he is in touch with his roots back in Gokarna. Apart from his research work he loves to chat with his friends back in Gokarna, which he says, makes him happy.