Dumb Motorists are Driven to the Wall!

You know, somebody actually complimented me on my driving today. They left a little note on the windscreen, it said 'Parking Fine.' - Tommy Cooper (1921-1984), Welsh (UK) comedian and magician.

Tommy Cooper, being a comedian, can laugh off the pain one encounters while parking by playing with words. But parking is becoming a progressively increasing nightmare. The government and civic corporations are driving the motorists to the wall. 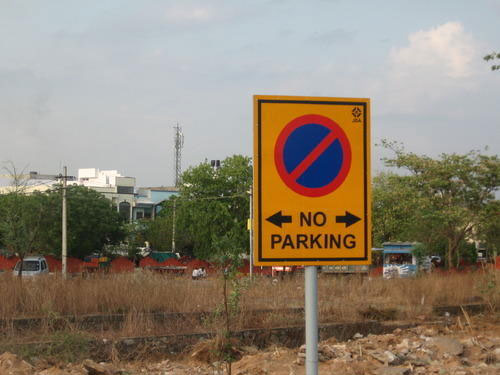 A news report titled “City roads to become ‘no parking’ zones unless declared otherwise” appeared on a national daily on December 15, stated that four vehicles to be deployed in Mangaluru to tow away those parked illegally. The report went on to add that that the vehicle owner or driver would have to shell out Rs 1,100 for a four-wheeler and Rs 750 for a two-wheeler to get their towed vehicle released.

The same was disclosed in an interaction with reporters during the police commissioner’s weekly phone-in programme. Deputy commissioner of police (Crime and Traffic) Uma Prashanth said that no amount of widening of roads had helped solve traffic chaos. This was primarily because the widened portion of roads was being used to park vehicles now.

Assistant commissioner of police (Traffic) M Manjunatha Shetty said that tenders would soon be floated to hire towing vehicles. Notification specifying the fine amount has already been issued, he said, and expressed the hope that the move would deter haphazard parking of vehicles on roads that affects smooth vehicular movement.

According to a Bengaluru media report dated December 18, stringent traffic fines lie ahead for traffic rule violators in that city which will be strictly implemented by mid-2019. The proposed steep increase is from the present Rs 100 to Rs 1100 for signal jump, using mobile phones while driving/riding, illegal parking and wrong side driving. In the case of rash driving, the increase is from Rs 300 to Rs 1000. 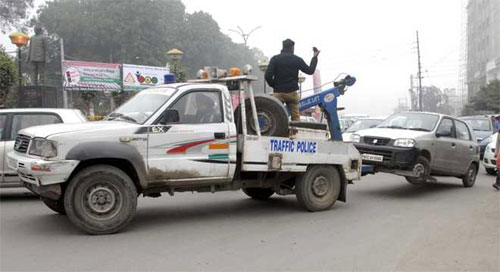 The new draft policy, said to be inspired by the stringent Telangana model of traffic rules, will be first implemented in Bengaluru followed by tier-2 cities of the State, including Mangaluru.

It may be noted that Mangaluru police are keeping a tab on traffic violations using CCTV cameras installed in 30 different locations in the city. Traffic police watching the footages take an image of the violator and then send a notice imposing a penalty on the owner of the vehicle. Around 126 CCTV cameras have been installed in different parts of the city. Of these, 93 CCTV cameras, installed in 30 different locations, are being used for traffic management and enforcement. Images from these CCTVs are viewed by police personnel on video screens. Images of the violators are captured and forwarded to the personnel, who issue notices imposing a fine and post it to the vehicle owner.

While all this modernization is welcome, the question remains as to what is being done by the police or the municipal corporation to provide parking lots for vehicles. Owning a motor car, or for that matter even a two-wheeler, is not a status symbol for citizens. It is a means of reaching destinations with least hassles unlike those who literally struggle in overcrowded and rashly driven public transport.

Let us not forget motorists as a class, pay good chunk of government and local taxes when they buy a car, fill petrol, pay insurance. Apart from supporting a robust automobile industry, thousands of garages provide employment to millions of car mechanics. So milking the car-owners dry is not only unethical but also counter-productive as cars instead of being on the road will be parked in garages to avoid parking fines. 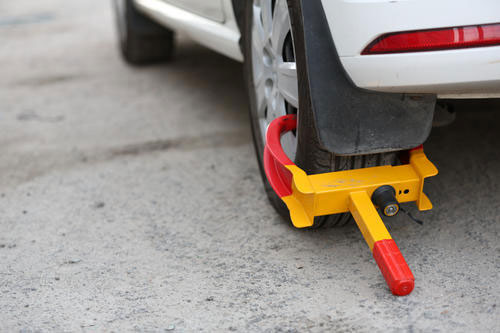 There is another, sinister angle to steep rise in fines for parking offences. When the fine for wrongful parking is Rs 100, the incentive to ‘compromise’ the offence at the spot traffic constable’s level is limited, while a fine of Rs 1100 gives attractive and tempting opportunities for corruption. The steep towing fee charged is an open invitation for kickbacks and “manufacturing” offenders. What was wrong with locking the wheel of wrongly parked cars and the local beat traffic cop coming to the scene and settling the matter with the base fine of Rs 100? I have faced this situation and the cops concerned had offered to waive the fine because of my bald grey pate, and I insisted on paying the fine nevertheless. The towing process often involves damage to the towed vehicle and the cost, repainting chipped painted areas could cost 1000-plus.

There are two reasons why motorists face congestion woes on the road. New buildings are supposed to provide basement parking. This provision is blatantly defied by using the basement for commercial purposes. On the contrary many prominent commercial entities put up “No parking” boards misappropriating the legal set-offs in front of buildings for captive use – with the threat of deflating the tyres. The police are aware of this and have admitted that private prohibition is illegal. But, the practice continues with the police winking at the illegality.

On the other hand police are increasingly deleting parking spaces on city roads without considering that motorists have to be helped to find parking spaces. For instance, there are ancient rules about keeping a parking distance (16 metres) on either end of bus stops and around the bends. In the first place, often buses do not stop at the designated stops. Such ancient provisions should be reviewed to accommodate high tax-paying motorists.

More parking spaces can be provided if police and civic authorities rationalize the parking spaces by clearly marking separate spaces for four-wheelers and two-wheelers. In the absence of such separation, a two wheeler can eat into the parking space for four-wheelers. In this age of computers and programming, this is a desk and site job. But who cares? Insisting on parallel parking (parallel to the curb) is a feasible proposition without affecting traffic flow in carriageways of most main roads like Hampankatta to Balmatta. But, why bother about motorist since they have no lobby like the bus-owners who invariably participate in the police-public interaction meetings. For years, police and RTO officials shout from the roof-top about harsh horns in buses and occasionally confiscate some. But, the menace continues.

Talking about parking space, for over two decades there are talks about developing the old bus stand ground at Hampankatta into a multi-level parking. What do we have to show for it? It reflects the scant concern the officials have for the harassed motorist.

In some African countries where cannibalism was practised, they were beating the drums at high pitch to drown the anguished cries of the victim. That is what our corporators did recently by making a diversionary noise about malls charging parking fees. The litany can continue but the point is made that the officials are driving the motorists to the wall without lifting their little finger to help them.

It is time that motorists unite and fight with their backs to the wall just the way they are being driven to the wall. They have nothing to lose except their inertia. Otherwise, they will suffer in silence muttering the following prayer:

According to the latest Delhi-datelined media reports (23/12/18), from January 2019, car prices in Delhi will shoot up as the transport department has approved a sharp increase in the one-time parking fee that is paid when buying a car. Luxury cars that cost above Rs 40 lac will bear the brunt - from Rs 4,000 now to Rs 75,000 - almost 18 times the current fee. Other price ranges will pay progressively less as the prices of the cars decrease.

The one-time parking charges are collected along with registration fee and road tax and are utilised for augmenting parking facilities.

While the tax is legally enforceable, with ‘augmenting parking facilities’, augmentation is a promise without any legal stand.

While the slogan says ‘Delhi Door Hai’, when it comes to taxing, states and municipalities, like in Mangaluru, are quick to jump onto the tax bandwagon.

Title: Dumb Motorists are Driven to the Wall!