Dharmasthala and its Dharmadhikari are in media focus day in and day out because the latter is currently marking golden jubilee of his ascending as head of the ever-expanding world of dharma and beyond. It had legendary roots and has a record of dynamic, self-sustained and unstoppable growth. In the midst of flash-bulbs and media headlines, there is a tendency to ignore its roots going back to 800 years.

The origin of Dharmasthala is coalesced in legend and lore. A pious couple, Birmanna Pergade and Ammu Ballalthi, lived in Nelliady Beedu. According to lore, the guardian angels of Dharma assumed human form and visited the couple in search of a place where Dharma was practised and could be continued. The visitors were well received and treated by the couple. Pleased over this, the Dharma Daivas appeared in a dream to Pergade and instructed him to set aside the Beedu for the Daivas and dedicate his life to propagate Dharma. This worship continues to this day.

In a subsequent dream, Pergade was asked to build separate shrines for the four Daivas. As per instructions he chose two persons as oracles of Daivas and appointed four persons to help him in his duties as executive head of the shrines. Brahmin priests were appointed to perform rituals. As per their desire, a Shivalinga was installed beside the Daivas and later the Manjunatha Temple was built around the Linga. The Kshethra has since been nurtured by the Heggade family – this surname being a derivation from Pergade.

Over the last 100 years Dharmasthala has expanded the domain of dharma to encompass charity, solace, justice, education, healthcare, conservation, community service, Ayurveda, yoga and nature cure. But, first the spiritual domain to which everything got added, especially during the regime of the last three Dharmadhikaris – Manjaya Heggade (1918-1955), Ratnavarma Heggade (1955-1968) and Dr Veerendra Heggade (1968-till date) now being in the midst of celebrating his ascending the head seat. The Heggade genealogy starts from Bhirmanna Heggade and the present Heggade is the 21st down the line.

From that legendary beginning, Dharmasthala today has grown into a vibrant township with thousands of devotees descending on it in quest of spiritual and temporal solace. Such visitors receive free lunch and dinner. Hundreds of people get free hostelry in its streamlined guesthouses. When I visited the kshetra, I came across instructions not to get married in the rooms. Such marriages can be solemnised in the temple itself. Once in a year Dharmasthala hosts mass marriages where the expenses are met by the Kshethra and the couples are given presents. The bride is presented a gold mangalasuthra and the couples are given clothes. Started in 1972, in one such events I monitored, 230 couples were married. Wedding celebration or not, it may be noted that smoking, drinking alcohol and eating non-vegetarian food are taboo in the township.

That takes us to Dharmasthala’s characteristic as a Kshetra of peace and non-violence. It is because there is a fusion of Jain and Hindu traditions here. The main Deity and Daivas are Hindu, the priests are Brahmins and the Dharmadhikaris are Heggades – Jains. This fusion accounts for its hosting an architecturall attractive Chandranathaswamy Basadi and the 39 ft. tall monolithic granite statue of Bahubali (Gomateshwara) installed on a hillock. While the other three Gomateshwaras in Karnataka – at Shravanabelagola, Karkala and Venoor – are a few centuries old, the one at Dharmasthala is of recent origin. It was commissioned by Ratnavarma Heggade in 1967, completed in 1970, installed in 1975 and inaugurated in 1982. It was carved from a single rock by Ranjala Gopala Shenoy at Karkala. The 170-tonne
statue was transported over a distance of 64 KM on a trailer with 64 wheels and three tractors of 250 HP. The statue has a 13 ft. pedestal and is installed atop a hill. 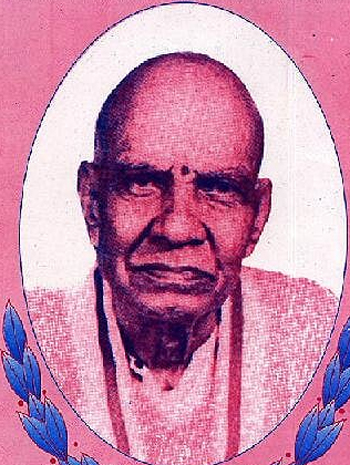 The statue takes me back to 1970s and my first tryst with another Jain centre, Karkala, 60 KM north-east of Mangalore. Sitting next to me on a Bangalore-Mangalore flight was a Japanese Buddhist monk heading for Karkala to meet the master of monolithic granite statues – Ranjala Gopal Shenoy. The Japanese ordered hundreds of large and small granite statues that brought fame and dollars to Karkala. When I met Gopala Shenoy, I discreetly checked his fingers. For, it was common for petty kings of yore to chop off the fingers of outstanding artists so that they would not replicate the works of art for their rivals.

Dharmsthala itself, beyond being a pilgrim magnet hosts a number of things of tourist interest. The Automobile Museum is unique. It has 51 vintage cars, the oldest dating back to 1903. There is also a 1915 Fordson tractor with crane, a 1926 ambulance and a 1926 fire engine. There are grand, opulent bullock carts used by Kathakali troupes in Kerala and 13 decorative horse carriages or wagons, the earliest dating back to 1864.

Now there is a specially designed museum, named Manjusha Museum, inaugurated on the 51st Pattabhisheka Vardhanthyotsava on October 24, 2018 by Minister H D Revanna, in the absence of his brother, Chief Minister HD Kumaraswamy. It has on display over 8000 artefacts exhibited in a specially build structure spread over one lakh sq ft with state-of-the-art facilities.

Just outside the old museum there was a trainer aircraft. Close by, when I was there, three elephants swung their trunks to ward off flies. They were not tethered nor was there a mahout to control them. But, that is the non-violent chemistry of Dharmasthala. On an earlier visit, the elephants, then stationed near the temple, kissed my Parsi and Gujarathi lady friends from Mumbai with the snout of their trunks. We took photos of the visitors caressing the elephants. 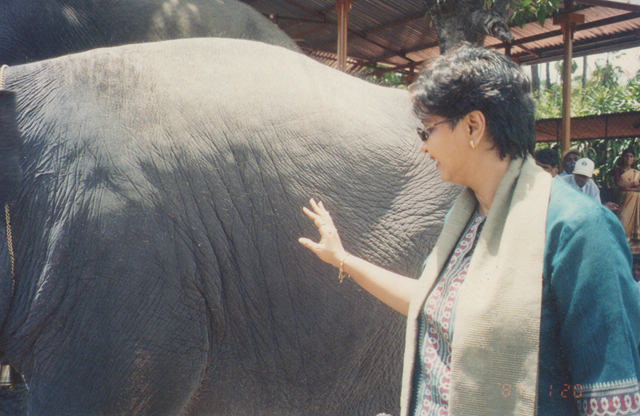 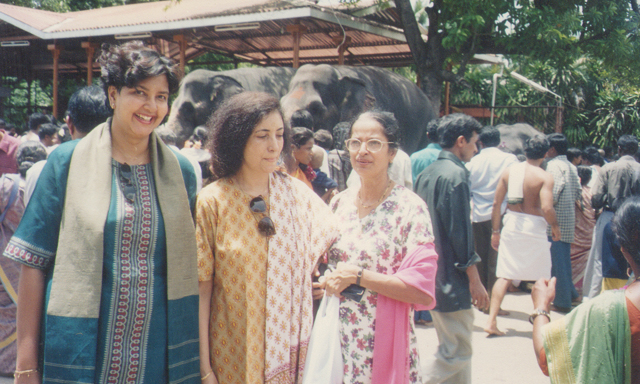 I had taken for granted many tourist sites of Tulu Nadu. But, when I had to escort visiting friends and relatives, I have to be more than a driver and become a tourist guide. One of the magnets that draw my guests is Dharmasthala, 75 km east of Mangaluru. From my childhood, I had an image of Dharmasthala where everything, mainly meals, came free. This was dinned into me by our farm workers for whom meals meant the world. As I confirmed through repeated visits, lunch and dinner are still served free daily to thousands of pilgrims through ultra-modern kitchens and large dining halls.

Finally, the continuous stream of devotees look beyond freebies and queue up for the darshan of Lord Manjunatha and his local representative, Dharmadhikari Veerendra Heggade. When he is in station, he sits on his high chair, listening to the woes and pleadings for charity. In the 1980s, I also joined the snaking line of people to enlist his sponsorship for my proposed book, ‘Journey through Tulu Nadu’. He flipped through my supporting letter and documentation, allowed me to have my say and responded. He explained how inflation has hit his budget to feed and house his pilgrims. He returned my papers. I opted to leave them back. I had been told that none who goes to Dharmasthala with a request returns empty handed. As I ruminated on this after returning to Bombay, a cheque arrived with a letter signed by him wishing success for my project. That I did not do the project and I returned the cheque amount with interest is another matter.