Picture this – Mr X, a young, belligerent, ambitious young man occupies an apartment for rent in a metropolitan city. He works for a multi-national corporate house. He is party-animal and throws lavish gathering for his colleagues and friends except that those parties entail unbearably loud music, occasional smoking that has triggered fire alarm and excruciatingly clamoring guests. There are times when Mr X’s landlord, although comprehending of his tenant’s lifestyle, verbally tries to talk him into controlling his nocturnal activities in a way that it doesn’t cause inconvenience to his neighbors. Mr X, callous in his attitude, anyway proceeds to go on with his loud gatherings and winds up getting himself vacated from the apartment from immediate effect at one such night.

Mr X pleads with his landlord to give him another chance and pardon him for the last time, but fed up with the incessant complaints from the neighbors and with the indifference displyed by the tenant to his several verbal requests, the landlord persists in escorting Mr. X to the exit gate of the apartment’s building. 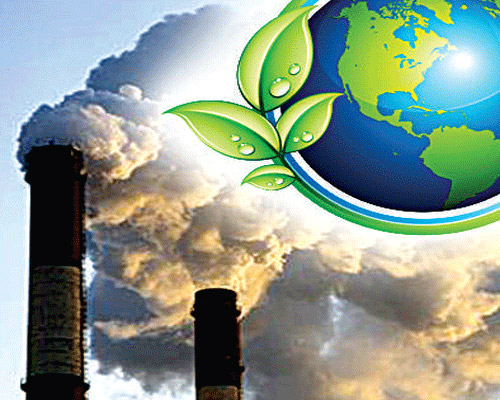 Now why am I brining up the issue of a landlord and an unscrupulous tenant, you ask? Because the human race is more or less acting like Mr X.

If scientific studies are to be believed, the earth was born about billion years ago. In its infant stage our home planet spewed constant volcanic eruptions, cooled down into ice age and gradually provided a safe haven for several life forms to evolve and live its term. Sometime between the ice age and the phase when the dinosaurs walked the earth, a major part of the landmass of our planet was covered by thick forests of 20 to 24 feet tall giant mushrooms. The same landmass eventually paved way for trees and other forms of flora and fauna.

We have come to a point where we don’t need saving the earth. We need to save ourselves. After all, how long are we going to be residents of Planet Earth? Our time is limited. Like wooly mammoths in the Ice age and dinosaurs in the Jurassic age, there will be a time when nature decides that it had enough of us and wipe us as swiftly as snap of two fingers. If you look at the geological history, our race is not meant to be in this world forever.

Our politics, corporate goals, awe-inspiring structures built by encroaching the natural backdrop, all of these will reduce to dust in no time if we are to face the wrath of the biggest landlord of all times – Planet Earth.

If you still haven’t realized the magnitude of the ecological damage caused by our insensitive attitude then you might want to know that since 1970, the world has lost 60% of its wildlife.

We do not know for certain how long human race is going to last on this planet. Although we have rented this giant rock, we do not have an official agreement that dictates how we decide to live here. But it definitely depends entirely on us whether we want to live in this temporary home called Earth in good terms or get ourselves ousted for being an unruly tenant like Mr X, because if we end up infuriating this landlord with our antics to a point where it gets unbearable, then we may get no opportunity to reason or plead with nature from taking action against us, and at that point we will have no one to blame but ourselves.

By Glaxson D'Lima
Glaxson D'Lima hails from Udupi, Karnataka. At present, he is residing in Doha-Qatar. Graduated from St Aloysius College, Mangaluru with Bachelors in Commerce, he is currently working as a Social Media Executive for a firm engaged in digital media marketing, based in Doha-Qatar.
To submit your article / poem / short story to Daijiworld, please email it to news@daijiworld.com mentioning 'Article/poem submission for daijiworld' in the subject line. Please note the following:

Title: It’s Time We Behaved like Good Tenants to Save Ourselves from the Wrath of Planet Earth