“Those who do not remember the past are condemned to repeat it.” - George Santayana (1863-1952), Spain-born philosopher.

These days Michael Fernandez is a worried man. After three operations for a dreaded disease, at 85 years, he can hardly move around in his cottage near Rosario Cathedral. But, his worry is not about himself but about his hero, the founder of the local branch of the bank for which Michael worked for his whole career. And his concern looks genuine and capable of curative action. But, we must start with a bit of background.

Modern banking in South Kanara commenced with the opening of a branch of Bank of Madras on October 1, 1869. Before that the money scene was dominated by indigenous apologies for banking, mainly involving three systems – Holi, Coori and Hundi. Moneylenders charged high interest, going up to 50% per annum. In this scenario entered Bank of Madras with its branch in Mangalore. It was one of the three Presidency Banks then, the others being Bank of Calcutta established in 1806 (on its receiving its official charter it was renamed Bank of Bengal in 1809) and Bank of Bombay established in 1840. Bank of Madras was established in 1843 with a share capital of Rs 30 lac. The three banks merged in 1921 to become Imperial Bank and became State Bank of India in 1955. 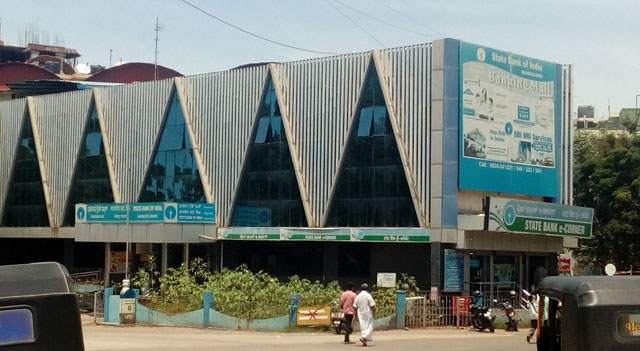 The bank branch in Mangaluru was housed in a one-storey building, opposite the Collectorate Gate (now DC Complex) and the building was painted in the same red-brick colour like the old Collectorate buildings.

Till Corporation Bank (then called the Canara Banking Corporation Udupi Ltd) and Canara Bank Ltd. were established in 1906, the Bank of Madras was the only modern banking service available for the undivided South Kanara District. Its service was city-centric, covering Mangaluru and Udupi. The Agent (as the Branch Manager was then called) made a fortnightly visit to Udupi which was then linked by cart road used by bullock carts and horse drawn jatkas – the four unbridged rivers en route being negotiated by boats. Whether the agent carried money with him, where he stayed (there being no hotels then) and with whom he transacted business is a grey area.

The Bank of Madras was also an elitist bank. It catered to British officials (civil and military) and businessmen involved in exporting plantation produce like coffee, cashew and cardamom. It was very selective in dealing with native traders and it was considered a privilege to have business relationship with its branch in Mangaluru. Among the privileged few were Alex Albuquerque Pai, the founder of Albuquerque Tiles, and another tile manufacturer and trader, Simon Alvares. Another client of the bank was Nellikai Venkata Rao, a trader in plantation produce like cardamom, after whom a cross road leading from Hamilton Circle and passing by the east end of SBI Building and going to Bunder, is named.

The first agent of the Mangaluru branch of Bank of Madras was Edwin Blanchard Palmer, a young man of 26 years. He held this position up to 1898 – a remarkably long tenure of 29 years. On retirement he chose to remain in Mangalore with his residence at Kankanady. He lived for another fifteen years and died on December 23, 1913 at the age of 70 years (a ripe old age then). He was an Irish Catholic (and not a colonial British master) and a friend of the then bishop of Mangaluru, Paul Perini, SJ. Palmer was buried in the Rosario Cathedral at Pandeshwar, below the pulpit, with the Bank of Madras connection as Agent noted on the marble tombstone – which is still there for searching eyes to see.

Palmer’s interests and concerns went beyond banking. He had definite ideas about developing the infrastructure of Mangaluru and its hinterland. He made out a case for developing an all-weather harbour for Mangaluru to berth sea-going vessels. He articulated these ideas through articles in Mangalore Magazine brought out by St Aloysius College. He also wrote about his grand harbour plan to the then collector, H S Thomas.

As for his writing in the Mangalore Magazine, here are some topics on which he wrote:

The Harbour (Chrismas issue of 1897). In a well-researched and presented article, he noted “Difficulties to overcome”, alluding to “Captain Love’s Public Action” and “Jetty versus Groynes Proposal” (Groynes is a rigid hydraulic structure built from an ocean shore or from a bank that interrupts water flow and limits the movement of sediment. It is usually made out of wood, concrete or stone). He was so modest that unlike most he noted his authorship of articles at the end of them – not his full name; but merely as E.B. Palmer. He continued his article on the harbour in the Easter 1898 issue where he dealt with the reclamation of the foreshore, harbour & trade, trade features and ending with “A practical conclusion”.

In the Michaelmas 1898 issue, Palmer wrote a postscript on the Harbour and projected railway schemes, followed by article on the Municipality in the Christmas 1898 issue. He resumed an article on the same subject titled “Politics & Politicians”. In the Christmas 1899 issue he wrote on “Mangalore Trade- Coffee” with telling subtitles which could delight today’s sub-editors – The Graveyard of Capital, The System of “Futures”, The Unlocked Cash-chest, The Arabs Fold their Tents and Profit and Loss.

Many of his then futuristic plans have been implemented since Independence with the likes of US Mallya spearheading the development projects first articulated by Palmer.

Palmer was the Hon Secretary (equal to today’s designation of president and still continues in that fashion) of Mangalore Club for two terms as the photograph below shows.

Though the tombstone in Rosario Cathedral and his writings in Mangalore Magazine are still available for reference, SBI Mangaluru has turned its back on him. According to Michael Fernandez, an oil portrait of Palmer used to hang in the Branch Manager’s chamber for decades and even after the new building was tenanted. Inexplicably it is now missing from this spot. In the banking hall a list of Bank Managers is displayed on the wall. It starts with K Dorairajan who was branch manager from December 1964 to April 1965. Who headed the branch before that and can Palmer’s service of 29 years as Founder-Agent be glossed over and forgotten?

The question is who did the vanishing act? The old building is said to have been haunted and officials who stayed on the first floor seemed to have heard a person walking at night. Did a ‘patriotic’ ghost hijack Palmer’s portrait? Is it a case of misplacing, missing or kidnapping? Will somebody answer? What will it take to start the list of branch managers (Agents) with Edwin Blanchard Palmer? Or, will sheer laziness or cussedness come in the way of justified restoration? Will somebody in charge own up and do justice to Palmer - and soothe Michael?