Everyone has a place at which they feel at peace. It could be a library, a private room, a spot on the beach, on a river bank, under a bridge, over a bridge, a church, a chapel, a temple, a mosque - could be anywhere! One such place for me is the small chapel of Mother Mary in our hamlet of Halealve. A tiny building, housing a statue of Mary holding baby Jesus has been a refuge for me for the past 28 years. From class test to public exams, from admission to campus placement, from dating a girl to marrying her, from married life to parenthood- each phase of my life has always been blessed by this powerful chapel. 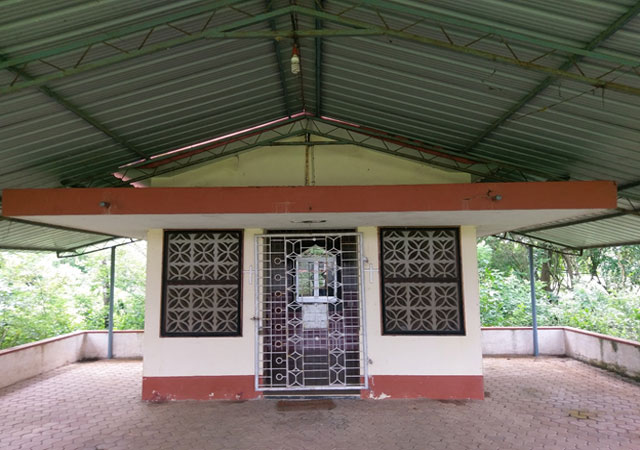 This chapel or what we call ‘Carmel Kopel’ is located about 5 to 10 minutes’ walk away from St Pius X Church, Piusnagar or as I mentioned earlier Halealve in the town of Kundapur. It is a prominent structure, though now masked by a few houses built around it. The statue is facing the sea. The chapel is popular among fishermen and people following Christianity, because Halealve is predominantly a fishing hamlet. Sea farers usually visit the chapel and light candles before they venture out to the seas. They seek protection against the rough seas and hence one can see candles before every major fishing season.

During my childhood, my mum and a few ladies from the vicinity used to offer prayers every Saturday at 5 pm. The ladies used to take active part in keeping the surroundings clean. I still remember my sister and I, used to make garlands out of Bougainvillea flowers every Saturday after school. The garlands offered the previous week used to dry and we used to replace them with fresh garlands. Along with us, there were two or three children who used to come to offer prayers to the mother. The ladies used to allow us kids to recite the 5 mysteries and all of us used to be in contention to blow off the candles lit before the prayer. As the prayers neared the end, just before the ‘Mogal Puta Soven’, all of us used to move forward slowly on our knees and line up at mothers’ feet in a hurry to blow off the candles. I was one of the youngest and shortest, so I hardly had a chance to blow off the candles. After many such occasions, the older girls allowed me to ‘ffuu’ the candles regularly. An instantaneous answer to my prayer. God bless the girls. 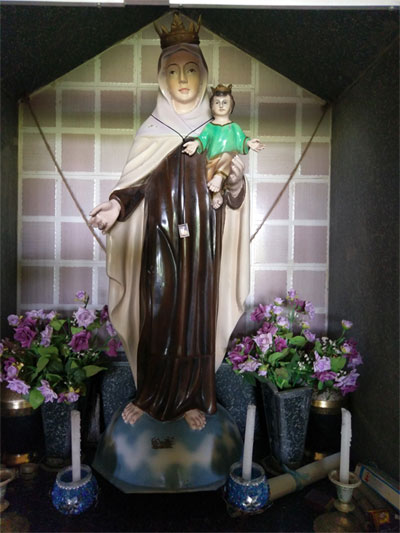 As the name suggests, the chapel is dedicated to Mother Mary of Mount Carmel. Mother Mary holding her son – the messiah resides here facing the Arabian sea. She has a brown scapular around her neck. I have no idea why the chapel here was named after Mother Mary of Mount Carmel. A peep into our church history revealed that, during one of the excavations done by the youth of our parish, in the mid 80’s , there were lot of relics and coins found in this area and it was decided that this place was holy and a chapel be built here. It seems much before the parish of Piusnagar was born, there was a thatched hut in which the faithful used to meet and pray. I got some information from my dad and he says, if his memory serves right, there were a couple of masses held at this place and one of the members of the prominent PRABHU family was buried here.

A single donor, who wanted to be anonymous and still is, donated Rs 30,000 then for this purpose and a chapel was erected in 1989. The site was in Carmel ward and I am assuming the decision would have been unanimous as to whom the chapel should be dedicated to. Recently, a generous donor has spent a large sum of money on the much-needed roof for the courtyard.

Almost everyone from our parish visits this chapel regularly. Twice a year, parishnors meet at the chapel to offer rosaries- one on the feast day of Mount Carmel - July 16 and the other on New Year’s Day - January 1. During my childhood, in the month of May, rosaries were held every day at 5 pm .Attendance to these rosaries was compulsory for us, if we were at home and I remember, rosaries used to coincide with my cricket matches held at vacant fields behind our house. I used to play till 4:45 pm, quickly clean up, rush to the chapel, say the rosary and rush back to the field by 5:45 pm and play until the sun set. They were indeed good old days. As there were a fair number of kids who were dragged to the chapel by their grand moms, every day or the other, most of the ladies used to get some sweets as a thank you gesture. Sometimes we used to get homemade poli-tovshe mandaas, Ponsache Patoli, Ghariyo etc. April and May being months of summer vacations, children from many urban cities used to visit their grandparents and attendance used to be a bit higher in May compared to the usual Saturdays.

My connection to the chapel is mostly because of my mom. My mom is an ardent devotee of this chapel and renders her services to the chapel regularly. There are a few families in the surrounding, who also render their time and money. Whenever things seem a little tough, I think of ‘Carmel Saibin’, as we call her and there is a strange solace which engulfs me which says “Ahh. Everything will be all right” and it sure does. Such is the magnetism of this chapel. My devotion had a turnaround, when I was growing up. Initially, I used to visit because of compulsion, but as years progressed, I understood the real strength of this chapel and its miraculous power. Mother Mary is a powerful intercessor and whatever I have asked for me and for others has been granted to me. The powerful brown scapular around her neck used to intrigue me and I wanted to figure out the history behind it and to my joy, it is very fascinating.

Mount Carmel is in Israel, not very far from Nazareth, Mary’s birthplace. It seems, hermits used Mount Carmel as a dwelling place and the powerful prophet Elias also used to dwell here, waiting for a virgin to give birth to the Messiah. This is all well documented in the old testament. They even erected a chapel, which I believe is still there. Anyways moving on to post Jesus era, we know early Christians were being persecuted relentlessly by those opposing Christian teachings. Saint Simon Stock, superior of the congregation of Carmelite Friary, was driven to the brink of desperation and he begged Mary of Mount Carmel to show them some sign, that she has not abandoned them. On July 16, 1251 AD, Mother Mary appeared to him and presented the brown scapular saying the following “My son, Receive this scapular. It is a safeguard against danger. It is a special pledge of peace and protection”. The actual words are more than this, but I have taken a snippet of only what I felt was relevant to our chapel. I chose those words because I felt them to be apt to our hamlet’s people- a mixture of all religions. I firmly believe that the brown scapular and the sea facing Mother Mary was, is and will be a protector of our hamlet against all calamities- which shows as there are so many fishermen who pay tribute to their gods and to the deity of the chapel. Halealve has been peaceful, even in the middle of such religiously volatile environment.

Whatever the history is, I am grateful to our elders to have erected and dedicated this chapel in honor of Mother Mary. I make it a point to visit the chapel during my visits home and during this visit I proudly presented to her, my little son who mouthed the words ‘Mama Jesus’. I believe she was pleased.

The chapel used to be in the middle of green paddy fields, which now has changed. Population has increased in the hamlet and there are plenty of houses around the chapel now. The plot where the chapel is built has become dense as the ladies who used to take care of the chapel have grown old and many are in heaven. It is amazing that this chapel has been run, without any formal organization, just by a few kind souls, who know who they are and know their contributions towards the betterment of the chapel, especially the ladies.

As generations pass, I hope the chapel does not turn into a ruin. Mom says Saturday devotion is no longer conducted, as there is no one around. Kids have grown up and are busy in their lives, most of the ladies whom I knew, have reached their eternal abode, those who are well, visit and pray individually. I really wish the current generation takes it upon them to at least visit the chapel once a month and work for its glory.