Who, or Where, are the Toxic ‘Missionaries’?

“If a politician found he had cannibals among his constituents, he would promise them missionaries for dinner.” H L Mencken (1880-1956), American journalist and satirist.

Missionaries are no more a joke. In some African countries where cannibalism was prevalent, when they killed and roasted a person, they used to beat the drums at high pitch to drown the cries of the victim. A similar charade is going on India in the case of rapes in children’s homes, especially in Bihar and UP. But first the facts as reported in the media on August 14, 2018. 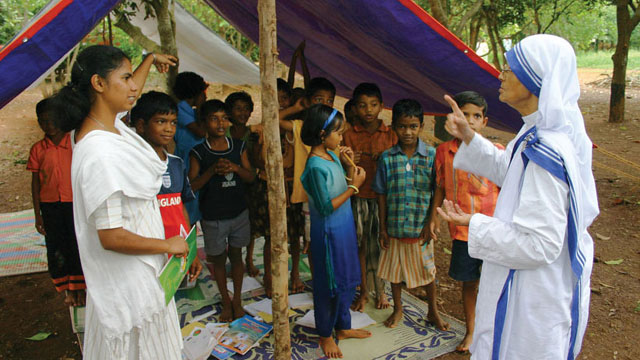 The Ranchi DC had ordered a probe into the children's homes run by Missionaries of Charity. The district officials inspected the homes and recommended action as these homes did not follow the norms, the official said. "Of the seven children's homes, one had no building, another was not following the guidelines prescribed under the Juvenile Justice Act. The third home kept 43 children in two rooms and the address of another was found wrong. The fifth home's licence expired, while some discrepancies were detected in other two homes," said the official.

This is akin to beating the drums while cannibalisation is in progress, as cited above, to drown the noise over extensive rapes in children’s and women’s homes in Bihar and UP. This is a diversionary tactic to avoid focussing on the rapes over which the Supreme Court anguished on August 11:

According to media reports, the Supreme Court expressed serious concern over recent cases of rape and sexual abuse of women at shelter homes in Bihar and Uttar Pradesh and asked when these horrific incidents would stop. The top court's observation came while hearing a matter relating to sexual abuse of children at orphanages.

"Tell us what is this happening?," a bench of justices Madan B Lokur, S Abdul Nazeer and Deepak Gupta said while referring to the recent incident at Pratapgarh in Uttar Pradesh where 26 women have been reported to be missing from shelter homes. "Yesterday, I read so many women have been raped in Pratapgarh. How will these things stop," Justice Lokur asked, adding "When it is going to stop?"

It may be noted that besides Pratapgarh, incidents of rape and sexual abuse of women and girls at shelter homes run by NGOs have also surfaced recently in Muzaffarpur in Bihar and Deoria in UP.

So, apparently, tweaking norms by ‘Missionaries’ attracts swift action while cases of rape are downplayed and linger. The fault lies in the ‘Missionary’ tag of Christians, though there is a long history of missionaries in the Indian-origin Hindu, Buddhist and Sikh religions for which a brief reference is made below.

According to Wikipedia, Hinduism was introduced into Java by travellers from India in ancient times when the early Javanese princes accepted Hinduism. Several centuries ago, many Hindus left Java for Bali rather than convert to Islam. Hinduism has survived in Bali ever since. Shantidas Adhikari was a Hindu preacher from Sylhet who converted King Pamheiba of Manipur to Hinduism in 1717. Historically, Hinduism has only recently had a large influence in western countries such as the United Kingdom, New Zealand, and Canada. Since the 1960s, many westerners attracted by the world view presented in Asian religious systems have converted to Hinduism. Swami Vivekananda, the founder of the Ramakrishna Mission, is one of the greatest Hindu missionaries to the West.

As to Sikhs, one morning, when he was twenty-eight, Guru Nanak Dev went as usual down to the river to bathe and meditate. It was said that he was gone for three days. When he reappeared, it is said he was "filled with the spirit of God". His first words after his re-emergence were: "there is no Hindu, there is no Muslim". With this secular principle he began his missionary work. He made four distinct major journeys, in the four different directions, which are called Udasis, spanning many thousands of kilometres, preaching the message of God. Currently there are Gurdwaras in over 50 countries. Of missionary organizations, the most famous is probably The Sikh Missionary Society UK.

The first Buddhist missionaries were called ‘Dharma Bhanaks’, and some see a missionary charge in the symbolism behind the Buddhist wheel, which is said to travel all over the earth bringing Buddhism with it. The Emperor Ashoka was a significant early Buddhist missionary. In the 3rd century BCE, Dharmaraksita—among others—was sent out by emperor Ashoka to proselytize] the Buddhist tradition through the Indian Maurya Empire, but also into the Mediterranean as far as Greece. Gradually, all India and the neighbouring island of Ceylon were converted. Then Buddhism spread eastward to the present lands of Burma, Thailand, Laos, Cambodia, Vietnam, and Indonesia.

So missionary work and religious conversion are not the sole monopoly of Christians. Yet, the words ‘Missionaries’ and ‘Conversion’ evoke toxic negative emotions against Christians in India the same way ‘Cow’ has a strong emotive image for Hindus. Cow can be called female bovine even as a bitch can be called she-dog. There is a lesson in this for this for Indian Christians.

The Catholic Church authorities in India should dump the terms ‘Missionaries’ and ‘Conversion’ as these terms evoke toxic negative emotions among non-Christians.

A bit of background is relevant. Historically missionary is a member of a religious group sent into an area to proselytize or perform ministries of service such as education, social justice and health care. The best example of this is Jesuit missionaries coming to India, starting from1598, and working in the field of education. But, now much of such work is done by Indian national priests and nuns. Perhaps Missionaries of Charity now do not have anyone of foreign origin since the death of Mother Teresa. Much contemporary Catholic missionary work has undergone profound change since the Second Vatican Council of 1962-1965 with increased push for indigenisation and inculturation, along with social justice issues as constitutive part of preaching the gospel.

In this historically changed context, the words ‘Misssionaries’ has no relevance as the church service is offered by national priests and nuns. Therefore, “Missionaries”, which evokes strong toxic negative emotions among non-Christians, should be dumped forthwith - with Christians taking the lead in this process. This also applies to “Conversion”. The church now should put conversion on the backburner and concentrate on improving the lot of the faithful already in its fold. If a bee is attracted to suck the spiritual nectar from the flowers in Christian gardens, it is its choice and problem and third parties should accept this gracefully.

Even so, dumping of “Missionary’ and ‘Conversion’ should be consciously done and replaced by local terms like ‘Save’ and ‘Sevaks’ – ‘Sevaks of Charity’, for instance. Changing names to ‘Indianise’ them (Sanskrit, Hindi or any Indian language) should be consciously done by the church leadership. Corporates change their names to reflect change in their business focus. They also change names for political reasons as noted below.

The Rajasthan government on August 9 formally notified the change of names of three villages, three days after the Union Home Ministry gave clearance to the proposal. From now on Miyon ka Bara village in Barmer district will be known as Mahesh Nagar, Narpada in Jalore district as Narpura and Ismailpur has been renamed as Pichanwa Khurd. The rechristening of the three seemingly ‘Islamic-sounding’ names comes on the heels of the controversy surrounding the renaming of the Mughalsarai railway junction to Deen Dayal Upadhyay junction in Uttar Pradesh.

The Bishops Conference of India and lay bodies like All India Catholic Union should launch competitions to suggest substitute names for ‘Missionaries’ and other foreign-sounding names for religious organisations in the spirit of indigenisation and inculturation. This will enhance the public image and acceptance of Christians in India.

I invite and urge readers to respond to this, including suggesting indigenous names.

Title: Who, or Where, are the Toxic ‘Missionaries’?