The Football World Cup in Russia has been a wonderful experience for many of us. It has taught many emotional and spiritual lessons. There have been myriad opportunities to showcase our love and talent for football. It has been a positive experience to learn and to know not only about the game but about the culture and tradition of other nations. It has helped me to admire and celebrate the uniqueness of each people represented in the world cup. I have come to gather five lessons that I have learnt from the world cup 2018. I have discussed them here lest we forget about this world cup. Let this world cup remain with us always. 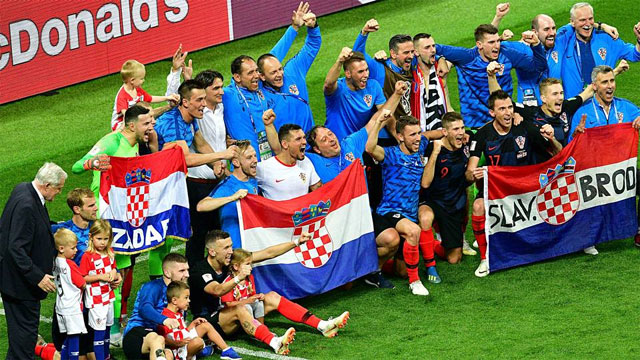 It is important to pay attention to the hard work and rigorous training any athlete undertakes to be the popular star. We would like to associate ourselves with famous footballers such as Lionel Messi, Ronaldo, Neymar Jr, Modric, Harry Kane and many more. Do we even think of them outside the televised game? I think that is where all the action of strict training, strict dieting, strict feedback is followed by these athletes. Their dedication to the sport helps them to climb the mountain of fame and success. One of the Orthodox Priest from Russia says, ‘football offers a way to elevate man’s physical and spiritual culture and it should be a tool for the Church. The task of an athlete is the same as that of a monk; without self-control, there can be no success.’ Our faith in God must teach to be disciplined in our lives and to be disciplined we must follow the certain strict training of our own senses. We are body, mind and spirit. Our physical and spiritual self must complement each other. In other words, our prayer must reflect on our body; our spiritual self must be seen in our body. If a person is spiritually grounded, we can see that person is cheerful and gracious.

Now that the Football World Cup is at the last breath, allow me to express my disappointment at the discrimination against women. I was appalled to read about four separate incidences in which women were discriminated against by boisterous men at the football world cup. In two cases male fans attempted to kiss the reporters. Julia Guimaraes from the Brazilian Globo TV had the courage to tell the fan off right on camera. She expresses her disapproval and disrespect towards women by men. This incident created an uproar in Brazil which was a catalyst for other women in media to speak up by saying ‘Enough is enough.’ In another incident, a group of male fans surround a woman from another country and make her repeat bad words in the language she is not familiar. This incident has taught women that they could be the target of discrimination and harassment by men with no respect for women. I was further alarmed that some men on social media criticized women for such kind of incidences. I want to emphasize that respect for women begins at home. Men who disrespect other women most often do not respect women in their own family. In some cases, men might live on a false philosophy of ‘male superiority’ in which case women must stoop down. I want us to think about how we treat women in our families and society.

This world cup also emphasized against discrimination based on race under the tagline ‘no to racism’. I am always thrilled to witness the football teams with such a diversity. The teams live by the mantra, ‘united we stand, divided we fall’ or I would put it as ‘a truly united goal for a win.’ I am so happy to see teammates believing in each other’s ability and this belief makes a great team and most often unbeatable team. The world cup gives yet another opportunity to consolidate our belief that we can achieve much together. Our energy is not wasted in entertaining opinions of division and colour. Our race nepotism takes away the gift of each other. It takes away our peaceful coexistence rather it makes us suspicious about others and drains our energy. If any of the footballers is suspicious about his co-player of a different colour, he would be draining his energy on it hence he will not be able to succeed.

We pick our team to support. We pick our country first and when our country loses we pick our continent and when that fails we choose our favourite player and so on. We do this picking teams without any barrier of division. We can move away from supporting our country to another with much ease. This crucial lesson from football as we live in world of division and strict borders. Football gives us an exposure to other countries. It makes us know and admire other countries that we have never heard before. It makes us relive the experience of the joy of others. Football commentary is the best way to learn about other countries where we can hear about the uniqueness of the country. Every nation is unique and beautiful. Football makes us break the boundaries of our own little world and allows us to think global. It breaks down the wall of division and unites us as people of the same wonderful planet. Our uniqueness becomes another’s awesomeness. We learn to admire other traditions and customs that have made them a nation.

In conclusion, the lesson that the world cup has taught us may remain with us and increase our love for each other. As we come to admire football stars, we shall admire each other. Every nation and its people are a gift from God to the planet earth and we are given the opportunity to experience those gifts from other people at this time. We learnt to break the barriers that divide nations and traditions rather embrace the richness of other nations. Football has brought minds and hearts together for a better future. Let us keep at it and carry on. Our goal is to be human. Let us remember we are born humans and we must die as humans. We are humans from the cradle to the grave.