Fruitful 90: A glimpse into the journey of Dr Alphonsus Mathias, Archbishop Emeritus of Bengaluru

Pangala, a place which was once part of Dakshina Kannada (South Canara) district and Mangaluru diocese, is renowned for fragrant jasmine flowers. This place is now in Udupi district and diocese. Pangala is the native of many stalwarts who have spread the fragrance of ‘Pangala jasmines’ in many parts of the world. One among them and may be the biggest in name and fame is Dr Alphonsus Mathias, Archbishop Emeritus of Bengaluru who is completing 90 years of his fruitful life on June 22.

The tall, admirable and one of the oldest living bishops in India, Emeritus Archbishop Dr Mathias is at present spending his life at the St John’s National Academy of Medical Sciences campus comprising institutions including the famed hospital and medical college. The Archbishop has crossed 60 years of priestly ordination and 50 years of his pontifical consecration in the year 2014. 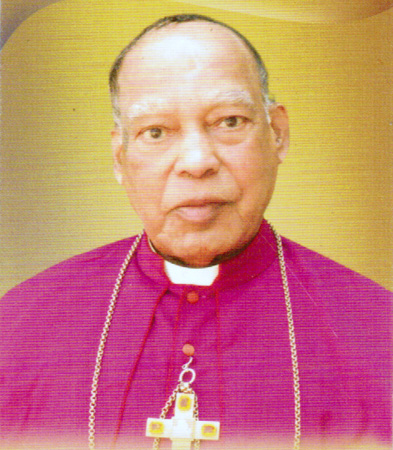 Family and early life: Alphonsus was born on June 22, 1928 as the fourth child of Diego Mathias, a progressive paddy cultivator and Philomena D’Souza a devoted homemaker of ‘Undaru’ within Pangala parish jurisdiction. This couple had five children - 3 sons (the other two sons Francis and Antony) and 2 daughters (Stella and Monica). ‘Undaru’ is near SVH Educational Institutions, Innanje (owned by Sode Math of Udupi). Alphonsus had his early education at St John’s Primary School at Shankarpura (1st to 4th) and higher primary education at Don Bosco Higher Primary School, Shirva (5th to 8th) and completed his high school studies at Milagres High School, Kallianpur.

Priest for Mangaluru diocese: Alphonsus joined St Joseph Seminary, Jeppu – Mangaluru in June 1945 with an intention to become a Mangaluru diocesan priest. His was the 2nd vocation from the Pangala parish established in 1922 (the first being the late Fr Thomas D’Sa). Alphonsus’ vocation had been influenced by his devoted parents, the then parish priest of Pangala Fr Basil Peres (later became the bishop of Mangaluru) and the then headmaster of Milagres High School, Kallianpur Fr Tellis.

Bro Alphonsus was very good in English and Latin apart from routine syllabus of the seminary. Observing his brilliancy superiors had sent him within two and half years of his Mangaluru seminary life to Pontifical Seminary in Candy, Sri Lanka for further studies where he studied Philosophy and Theology. He was ordained as a priest on 24 August 1954 at Candy. He offered his first Solemn Mass at Pangala Church after his return to the native at the end of the year. 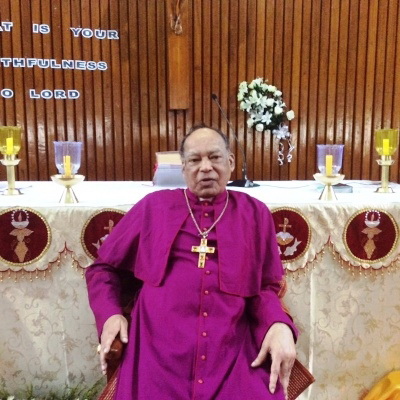 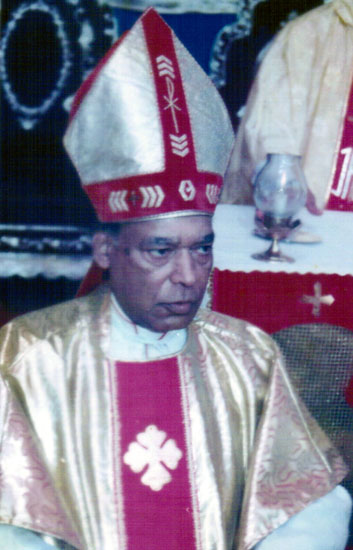 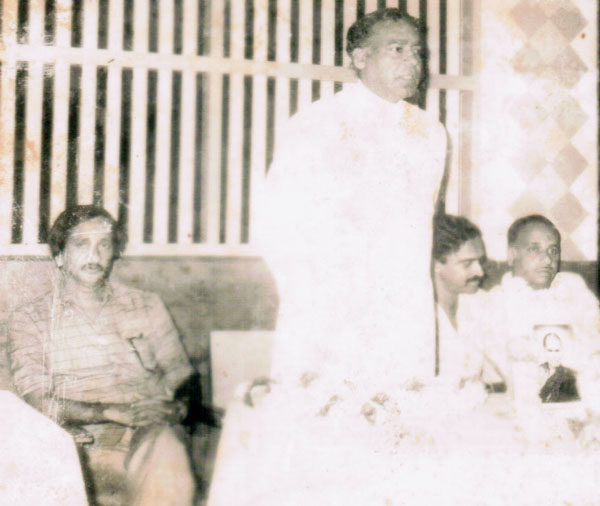 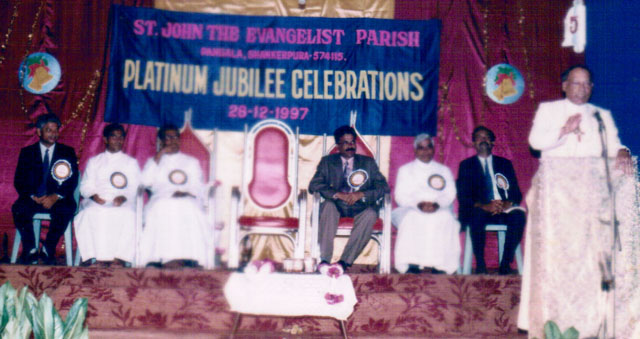 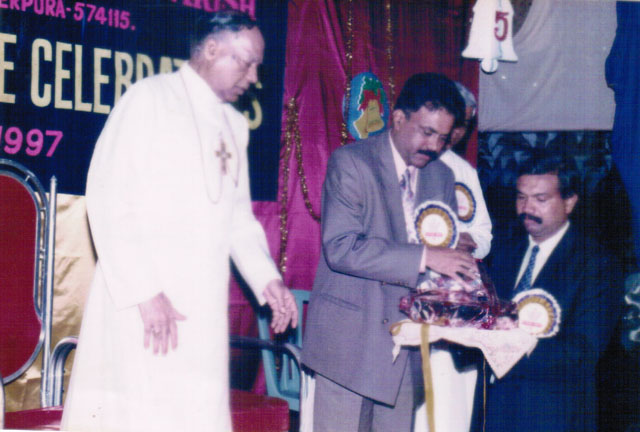 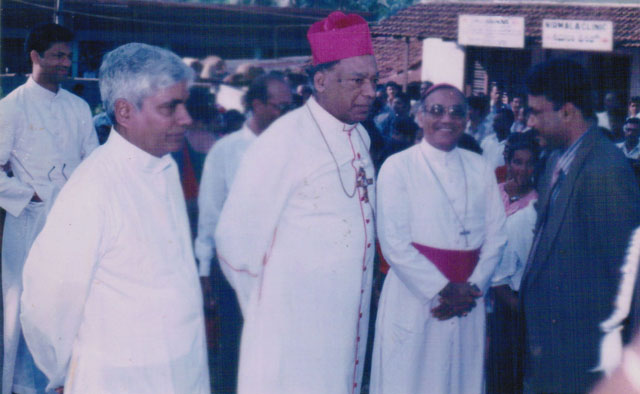 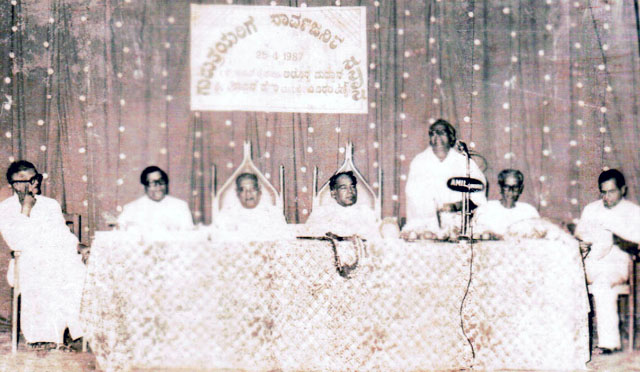 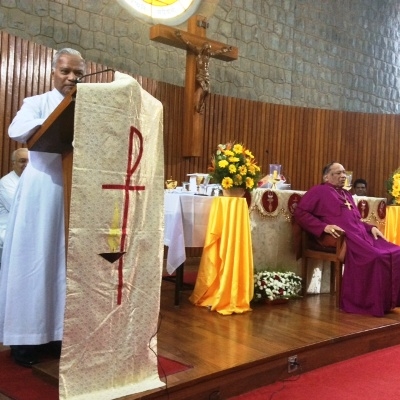 The first appointment of Fr Alphonsus was at St Joseph’s Parish, Bajpe as an assistant parish priest. After about a year of service there, he was sent to Rome in 1955 for higher studies in Canon Law and International Civil Law. There he undertook doctoral studies in Canon Law and International Civil Law from the University of Propaganda Fide and Lateran University and obtained degrees DD, JUD, PhL. Fr Alphonsus returned to Mangaluru in 1959 and served as secretary to bishop Raymond D’Mello and as chancellor of the diocese. During this period he got an opportunity to visit almost all the parishes of the diocese.

When Fr Alphonsus was consecrated as bishop, his age was just 35 and he was one of the youngest bishops in India.

When new Chikkamagaluru diocese was formed, there were only 19 parishes and 18 diocesan priests under its jurisdiction. The young Bishop had to work hard to build up the diocese. Bishop Alphonsus toiled throughout his 23 years of service and he was successful in his mission. As a result when he handed over the mantle to his successor there were 39 parishes, one shrine, three independent stations with resident priests and 56 active diocesan priests and many religious priests. Moreover, educational institutions including first grade college, minor seminary, hospital, technical school, social service centre, convents and other institutions were started and began functioning.

Young bishop Mathias had the privilege of attending third and fourth sessions of the Second Vatican Council as Council Father and to know the outcomings.

There was a public function held at the grounds of St Joseph's Indian High School on April 19, 1998 to bid farewell to Archbishop Alphonsus Mathias. Priests, religious and laity made the congregation around 6000.

Following excerpts are from the farewell address which show the popularity of Archbishop Mathias in Bengaluru Archdiocese:

Archbishop set forth with zeal to acquire land for building places of worship. Many churches sprang up with his blessings and encouragement including St Paul's Church, Dasarahalli; St Francis Xavier’s Church, Chikkakamanahalli; Christuprabhalaya, Jayanagar; St Jude’s Church, Gangenhalli; St Thomas’ Church, Sultanpalya; Our Lady of Vellankkani Church, Yelahanka, Chunchigat; Mestripalya, Vijayapura Byrathi, Irinyapalya, Naganahalli and Harobali and many more. Quite a few presbyteries were also constructed during his tenure.

Archbishop combined the building of churches with the strengthening of the evangelical and pastoral ministry in the local churches. In this project he sought the active involvement of the clergy, religious and laity.
He was the President of the Catholic Bishops' Conference of India, the Chancellor of the St Peter's Pontifical Institute and Pro-chancellor of Dharmaram Vidya Kshetram

Archbishop saw to the emerging of the beautiful, architecturally outstanding Bishop's house during his time. Besides he strengthened the financial position of the Archdiocese.

Archbishop appointed an experienced priest to study the plight of Dalit Christians and followed it up with a stern injunction to all Christian schools and colleges to welcome Dalit students, give them concrete support and invited them to turn to the Archbishop’s house for further help if necessary.

To ensure justice for all employees of the church and religious institutions, he laid down policies with regard to pay scale, provident fund, gratuity, medical assistance, food and house rent. He loved the youth, yet, he never forgot those who were old and needed care. He built a beautiful and tranquil home for retired priests of the Archdiocese where they could spend their days in peace and prayer.

Archbishop Mathias is a brilliant orator and master of many languages. His haunting homilies and powerful exhortations reached deep inside the minds of the listener. But most important of all, he could speak the language that all could understand - the language of love, concern and humanity.

An erudite scholar Archbishop could recall the articles of the Indian Constitution as well as the articles of faith. On any day he never lost his essential simplicity, sincerity, humility and directness. He was appointed Chairman of the Commission for Social Communications of the Federation of the Asian Bishops' Conference; President of Radio Veritas, Manila; a member of the Pontifical Commission for Social Communications and the Council for Justice and Peace, Vatican. Wherever he was, he displayed charisma and a talent for reaching the masses. Yet, he never lost his singular ability to communicate with the individual person and he was comfortable with people from all walks of life.

For young and old alike, Archbishop is a role model, admired for his words and deeds.

His analytical acumen and psychological insight helped him deal with the complexity of human behavior and shape policy. Yet it was his essential warmth and openness that endeared him to people of the archdiocese.

Archbishop grew in wisdom and years, but remained eternally young in the company of the youth who held a special place in his heart and his policy making.

He travelled far and wide across the world to attend conferences but he never forgot to keep in step with his flock - to walk beside them as friend and counsellor.

Over six feet tall and endowed with a towering personality Archbishop is unassuming and often unobtrusive. Resplendent and regal in episcopal finery, he is known by people close to him that he feels uneasy and uncomfortable with pomp and splendor.

It is a matter of sorrow and concern that his failing health has been largely responsible for his having had to resign as chief shepherd of Bengaluru Archdiocese.

Apart from the above, Dr Alphonsus Mathias occupied some of the prestigious positions and undertook a lot of developmental work. He was greatly responsible in upgrading St John’s National Academy of Health Sciences. He also improved the condition of St Peter’s Pontifical Seminary in Bengaluru. He was elected as the chairman of many commissions under the Catholic Bishops’ Conference of India (CBCI). He was elected as the president of CBCI for two terms in 1989 and 1993. Archbishop Alphonsus Mathias was also given important responsibilities in the Federation of Asian Bishops’ Conference (FABC) and he also served as a member of Pontifical Commissions such as ‘Social Communication’ and ‘Justice and Peace’.

For me he is like a friend: I am proud to say that the Archbishop and I belong to the same parish – Pangala. I had the privilege to meet him many a times during his hometown visits. Though I am much younger to him he talks to me like a friend. In 1994, when he came to know that I had resigned for the employment at Mangalore Chemicals and Fertilizers (MCF) at Panambur and ventured into self employment he advised me to be careful in the business. He gave example of a big advertising agency known to him which was running well but went bankrupt because of the cheating by some big clients.

At Pangala, the Archbishop was usually staying at the presbytery. For me whenever possible it was a great joy to participate in his mass and listen to his touching homily mostly with local incidents and instances of his childhood time. As far as I remember at least on two occasions I had the opportunity to take him from Pangala Church to his ancestral residence at Undaru in my car.

My prayer: As I read in reports of his episcopal ordination golden jubilee held in 2014 at St John’s, Bengaluru, the institutions were like a second love for the Archbishop Dr Alphonsus Mathias after the diocese and the faithful that he had served over the past 50 years. That is the reason why he prefers to stay at St John’s campus after his retirement and enjoys his stay and the walks that he takes around the complex.

I pray to God Almighty to grant the nonagenarian Archbishop good health and peace of mind throughout the coming years.

Title: Fruitful 90: A glimpse into the journey of Dr Alphonsus Mathias, Archbishop Emeritus of Bengaluru