Do We Forget Our Dear Departed Under the Marble Slab?

Two grave media report about the grave subject of graves, on the same day, May 30, 2018, provoked this recall and reflection on how we deal with our dear departed even unto the grave in the graveyard. But, first the facts as reported.

A man in the US state of Illinois was charged on May 29 with hate crimes and other criminal offenses after swastikas were found spray-painted on hundreds of headstones in a cemetery.Some 200 graves were defaced with swastikas drawn with black spray paint at the Sunset Hills Cemetery in Glen Carbon, a small community near the city of St Louis. In the second instance, South Kashmir’s Pulwama remained tense on May 30 as locals accused the security forces of damaging the tombstone of a slain Hizb-ul-Mujahideen ‘commander’. Locals of Pulwama’s Drabgam held a sit-in outside the Tehsil headquarters over the incident. Sameer Bhat alias ‘Tiger’ was killed along with an associate on April 30 in Drubgam in an encounter. The banners covering his grave were also allegedly torn. 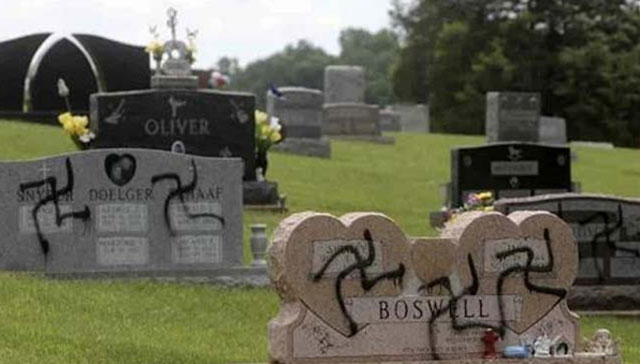 Cemeteries or burial grounds are where we consign the bodies of our dear departed with purple prose, composed by the grieving family or provided by the monument builders, inscribed on the tombstone. Such inscriptions are called epitaphs and the simplest such is said to be on the grave of Alexander the Great: “A tomb now suffices him for whom the whole world was not sufficient.” We don’t know the dimensions of his tomb. But in modern times, in graveyards and cemeteries, tombs or graves are +- 6’ X 3’ standard.

Coming closer, for instance, to contemporary Mangaluru or Mumbai, Christians mainly take the burial route for their dear departed. Time was when the dead body had to be buried within 24 hours – before onset of its decomposition. Till the body was taken for burial, there was no cooking in the house, with neighbours and relatives supplying food for the mourners.

The scene changed over the last few decades with morgues attached to hospitals hosting the dead bodies in deep freeze till the mourners and their relatives from far off could assemble. In the interim, the funeral house functioned normally, even with spiritual sustenance on the plea of drowning sorrow. This interregnum is marked with elaborate preparations for the funeral, Mass setting, decorating the church, advertising the funeral arrangements in print and electronic media, the brass band and the works.

In the olden days, there was a concept of post-funeral sharing of mourning meal (Dukhachi Paze) for close relatives and neighbours. Now a full-scale celebration follows the burial on the plea that the long waiting for burial drains people and, in any case, even death is a release and relief - don’t ask for whom – calling for tension - releasing celebration.

The earlier Memorial Mass after a week is now brought close to the burial date for out-of-town visitors to return to their nests and work stations. Now the traditional Month’s Mind has been largely given a go-bye and the Annual Memorial Mass is a big do, often rivalling a wedding celebration, with food and spirits in full flow.In the meantime, a parallel action is taking place in the graveyard or cemetery. A grand monument is raised over the grave. Unlike in the olden days when there was no limit on the dimensions of the monument, like in Milagres cemetery, now there are outer limits on the dimensions. One can only compete in the quality of marble, lettering of inscriptions and photos of the interred. To that extent there is some equality of treatment (the upper limit) among parishioners.

Graveyard or cemetery is one aspect of remembering the dear departed. The elaborate celebrations in their honour, like at the first Annual Memorial Mass, is one way of honouring the departed. I attend daily Mass and several intentions are read out by the priest are for the individual departed souls or for the souls of all family members collectively. It is also possible that in the case of recent bereavements, there may be visit to the grave on the birthday or death anniversary of the departed. Then there is a common rush to the cemetery on All Souls Day (November 2) with flowers and candles. For this last occasion, the parish organises the general housekeeping of the cemetery and some people whitewash the (non-marble) graves. Otherwise, the dear departed, represented by their graves, are out of sight and out of mind.

This results in highly neglected state of these monuments on which impressive sums are expended initially. Most cemeteries are marked by growing trees which shed their leaves on a sustained basis. They also host birds whose droppings mess up the monuments. And there is air-borne dust which settles in thick and sticky layers on the monuments.

On a recent visit to my wife Lynette’s monument in Bondel parish cemetery, I spied a lady, with a helper with bucket of water, cleaning solution, brush and mop. Fortunately, the pair did not have to bring water from outside because there is a functioning tap provided by the parish within the cemetery compound. On asking, the young lady organising the clean-up, I learnt that she had come from Mumbai to visit the monument of her recently expired brother. Coming all the way from Mumbai to pay her respect to her brother, she had to start with cleaning layers of dust and bird dropping. It is no better for the local parishioners.

Is there a better way of tackling this? The churches charge a certain (impressive) amounts for burial in an exclusive grave (call it real estate transaction). Then, if you want to build a monument (whose outer dimensions are controlled – fair enough), you have to pay another hefty amount.

It can be legitimately asked as to what happens to these amounts and why can’t part of these funds, or interest thereon, be used for sustained maintenance/housekeeping – say once a week – throughout the year without waiting for All Souls Day?

On the other hand, without going into parish accounts or getting into argument with parish councils and such other bodies, those having love and concern for their dear departed can float a Cemetery Maintenance Corpus Fund and organise sustained (weekly) maintenance of the cemetery.

I am weak at maths and hence present a simple proposition. If there are 100 monuments built in a small parish cemetery, like Bondel, and each monument sponsor contributes Rs 10,000 on one-time basis, the total would be Rs 10 lakhs. At current fixed deposit interest rates it yields annual interest of Rs. 70,000+. Of this, a person can be contracted for weekly cleaning of the graveyard for about Rs 5,000 a month leaving some Rs 10,000 annually for cleaning materials, brooms and mops. The sum available to the cleaning contractor (person) works out to Rs 1000 per working day on the basis of five weeks per month. Not a bad proposition even if he works the full day of 8 hours. The operation and sums involved can be scaled down or up depending on the number of monument patrons involved in a given parish.

Who will bell the cat? There should be least involvement of parish management hierarchy. A small (Three?) independent committee, answerable to the parish priest, seems a good start. It could receive suggestions and complaints and act on them. It is a great opportunity for people to continuously honour their dear departed by keeping their graves spic and span.

This is a grave subject sometimes marked by epitaphs laced with pun. Lawyer John (not me!) collapsed in court while arguing a case. He was laid on the floor pending arrival of the ambulance –and made some media headlines. He didn’t survive. His epitaph read: “Here lies he who lied in court.”

Title: Do We Forget Our Dear Departed Under the Marble Slab?