Nations have been driven by a non-existent vehicle called democracy. There is an inevitable reality of divide and rule in any given democracy. Democracy has become a matra for the powerful to achieve the agenda that ensembles one’s whims. I have found difficult to believe in democracy. I beg to differ in my view on democracy.

Democracy is actually and truly a dividing factor. It leads us to believe that everyone is equal in a democracy. My argument is no alien to any leading political thinkers and is neither foreign to any politicians. Every politician knows exactly that democracy is just a concept that is used to divide to rule so their dishonest agenda could be met.

In recent times, political situations throughout the world have shown us that the powerful and big mouthed political party or politician wins the race under the shade of democracy. It is really an irony that democracy is divisive and fulfills the agenda of the powerful. It is adomination over powerless. I would not hesitate to say that democracy is but domination. It could be called the largest domination country in the world. The United States of America has been the strongest witness when current president won the election, but not by popular vote. In India, it has been a trend for a longest time that one can win the elections and indeed under the banner of democracy. 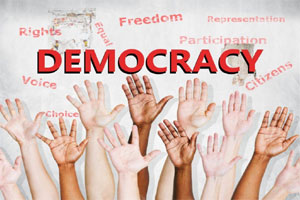 I would like to focus on Indian political situation post independence. India has been portrayed as the largest democracy in the world. Why has it been called with such an honorable title when India has failed to witness that in reality? I am not pointing my index-finger at any particular party. But I argue that this is only a pretence under which Indian political parties enjoy the ride. Do not conclude that I am anti-BJP or anti-Congress as a Christian. That would be immature of a balanced view. I truly believe that I am an Indian and I pledge by the tricolor and I am proud of my anthem. One thing I cherish from my childhood is the national anthem that we sang two times a day during the school days. Mind you, I went to a Catholic school. My love for the country was nourished right from my early childhood so is yours.

Democracy has been adulterated by conceit and egotism of a few influential people who invariably use the Democratic process to achieve hidden agenda. The people who jump on the band wagon have been like people in the Plato's cave.They break open the chains to see the reality outside the cave. Formerly, they thought the cave and shodows protruding in the cave was their reality. The ego and pride of the influential is fed with some realities like religion which has nothing or very little to do with politics. It has been baffling to witness how religion has become so crucial to Indian politics. For every politician, religion is the point of departure and a perfect entry into success because religion is divisive. Politicians like to feed on something that helps them to climb the nasty ladder. I was deeply disturbed and concerned at how the sheepfold or followers of different religions have taken advantage of the faith to entertain political gimmicks. There is an attitude of hatred towards others purely based on religious beliefs.

If Hindus think that they are majority in India and it is a Hindu nation, I am certain that the party they support will certainly win for the rest of the existence of India although it might not be a Hindu state because I believe that Hinduism is a way of life and a life of prosperity and harmony. Hinduism must help everyone to live a life of integrity. If Muslims and Christians think that they need to come together to oust another party so that India is truly a multi-religious nation, I think we are heading towards hating Hindus. Let us not be fooled by the rhetoric that it is a complicated issue. No, it is not complicated issue rather it is truly a simple gamut. Think of your school days or think of the village that you lived where Hindus, Muslims and Christians lived together almost as a family. Why is that sentiment from school or village messed with hatred? Is it not the politicians and party workers who are dividing us so that they achieve their goals of success? This success that they look for is not for development of the nation rather it is for the success of their own development. Each of us needs to reflect on where we are heading with this kind of political disasters. We must not allow democracy to die in the hands of the powerful dictators.

Democracy that is not popular is dictatorship. In the recent elections in Venezuela, Maduro has shown that democracy is dictatorship proving that he is indispensable. He has the complete autonomy to choose and elect himself for democracy has failed. It might seem like a democratic election. I wish this does not happen to India. This could be a possibility if people think that the leaders they adore are indispensable and cannot be changed. In which case, political leaders will go to any extreme to come to power, extremes such as manipulation and rigging of elections. This is detrimental to the well being of a nation. If BJP or Congress thinks that only they can save the country, they are wrong and we have to guard against these political tantrums which are for the gain of a select few.

Religion without humanity is legion; legion of evil people who want to bring discord among different faiths. Humanity should be the culmination of any religion. Honestly speaking, the people who spew hatred towards others religions by saying that theirs is true religion or this nation belongs to that religion, I am certain that they have no knowledge and experience of God in their religion. In other words, they know very little about their own religion. We must be able to challenge them to study to know and experience the beauty and goodness in their own religion. No religion teaches us to hate other religion. But it seems like humanity is kept out of equation. I am a Christian, but I try to draw inspiration from other religions because they offer meaning to my life. Religion is way to God and not God himself. Hence, let us get it right now before it is too late. God is in every religion and every religion must indicate a pathway to God.

In conclusion, I want to mention that I grew up watching the great epic ‘Mahabharata’ on Doordarshan channel in the late 80s. We did not have television at home, hence our church priest used to show the programme on his television. I never considered it as something only Hindus must watch, but it was a great experience to watch one of greatest epics of India. In Mahabharata, there is reference to Bharatvarsa in which Bharata tribe lived with a same plurality of caste, religion, culture, language and lifestyle like today’s India. This is why India is called Bharath. So, when we utter the chant ‘Bharath Mathaki Jai’, let us keep the plurality at the forefront. This is why India is considered to be the greatest nation on the planet with its diversity in every regard. I grew up learning Tulu language which is predominantly spoken by Hindus and I am proud of it. This does not mean that I give up on my mother tongue, Konkani. These two languages along with Kannada gives me a specific identiy as an Indian. I appeal to everyone, especially our political leaders to work for unity and respect for each other’s beliefs. Let us bring humanity back to our religions. Let democracy enjoy its sanctity. Let us pay heed to the silent scream of democracy and reach out to keep it sacred.