What is carotid stenosis?

Carotid stenosis is a narrowing of the carotid arteries. The carotid arteries are two major arteries that carry oxygen-rich blood from the heart to the brain. Also called carotid artery disease, carotid stenosis is caused by a plaque deposit (atherosclerosis) inside the artery wall that reduces blood flow to the brain. Over a period of time, progressive narrowing and atherosclerotic plaques can increase risk of brain strokes, also known as brain attack. Treatment aims to reduce the risk of stroke by controlling or removing plaque buildup and preventing blood clots.

Blood supply of the brain 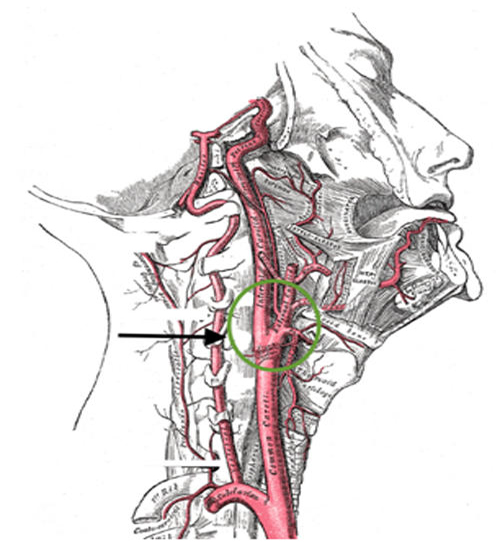 The common carotid artery divides into the internal and external carotid arteries. The bifurcation (green circle) is the most common site of atherosclerosis plaque buildup

What is carotid stenosis?

Carotid stenosis is a progressive narrowing of the carotid arteries in a process called atherosclerosis. Normal healthy arteries are flexible and have smooth inner walls. As we age, high blood pressure, cholesterol and small injuries to the blood vessel wall can allow plaque to build up. Plaque is a sticky substance made of fat, cholesterol, calcium, and other fibrous material. Over time, plaque deposits inside the inner wall of the artery. It can form a large mass that narrows the inside diameter of the artery. Atherosclerosis also causes arteries to become rigid and reduce its elasticity. 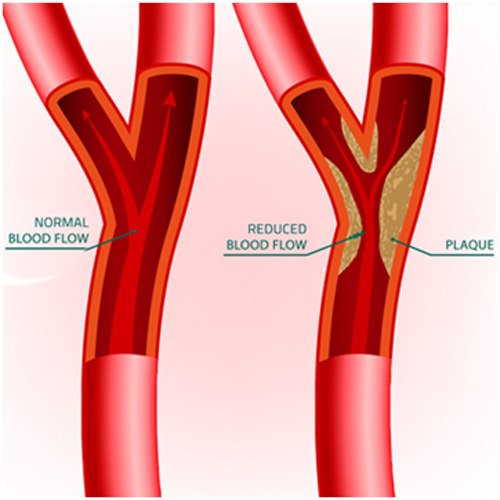 Atherosclerotic plaque narrows the artery diameter, reducing blood flow.The irregular surface of the artery wall can cause clot formation that blocks the vessel or breaks off and blocks a smaller vessel

There are three ways in which carotid stenosis increases the risk of stroke:

• Plaque deposits can grow larger and larger, severely narrowing the artery and reducing blood flow to the brain. Plaque can eventually completely block the artery.

• Plaque deposits can roughen and deform the artery wall, causing blood clots to form and blocking blood flow to the brain.

• Plaque deposits can rupture and break away, traveling downstream to lodge in a smaller artery and block blood flow to the brain.

What are the symptoms?

Most people with carotid stenosis have no symptoms until the artery becomes severely narrowed or a clot forms. Symptoms are most likely to first appear with a mini-stroke, also known as a transient ischemic attack (TIA). TIAs result when blood flow to the brain is temporarily interrupted and then restored. The symptoms typically last a couple of minutes and then resolve completely, and the person returns to normal. TIAs should not be ignored; they are a warning that an ischemic stroke (brain attack) and permanent brain injury may occur in future. There are 2 types of brain strokes: Ischemic (reduced blood flow) 80% of cases and hemorrhagic stroke (bleed in the brain) 20% of cases. Symptoms of a TIA or an ischemic stroke can include weakness or numbness in an arm or leg, difficulty speaking, a drooping face, vision problems, or paralysis affecting one side of the body. The incidence of stroke has shown a gradual increase in the past 2 decades and is a major cause of debility and loss of productive function.

What are the causes?

Atherosclerosis is the major cause of carotid artery disease. It can begin in early adulthood, but it usually takes decades to cause symptoms. Some people have rapidly progressing atherosclerosis during their thirties, others during their fifties or sixties. Atherosclerosis begins with damage to the inner wall of the artery caused by high blood pressure, diabetes, smoking, and high cholesterol. Other risk factors include obesity, heart disease, a family history of carotid stenosis, and advanced age.

Older people are more likely to be affected by carotid stenosis. Before age 75, men are more at risk than women. A person who has high cholesterol, has high blood pressure, and smokes is eight times more likely to develop atherosclerosis than a person without these risk factors. Carotid stenosis is estimated to cause 20 to 30% of all ischemic strokes of the brain.

How is a diagnosis made?

It starts with a complete clinical examination of the patient by a doctor. One or more diagnostic tests are performed to detect narrowing of the carotid arteries. Carotid stenosis is diagnosed by either a doppler ultrasound of the neck, a CT angiogram (CTA) of the neck, magnetic resonance angiography (MRA), or a cerebral angiogram each using various diagnostic criteria.

MRI can also reveal evidence of multiple small strokes in the brain. Doctors can make a diagnosis of carotid stenosis if tests show diminished blood flow in one or both carotid arteries. Carotid stenosis is quantified as a percentage of the normal carotid artery diameter. Management would need a combined effort of a neurologist and neurosurgeon. 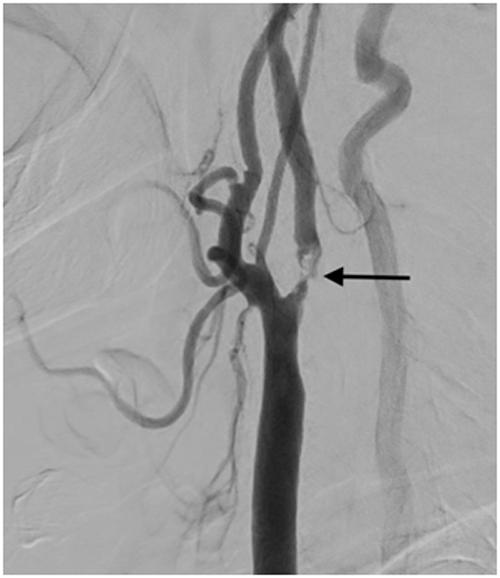 What treatments are available?

The goal of treatment is to reduce the risk of stroke. Treatment options for carotid stenosis vary according to the severity of the arterial narrowing and whether you are experiencing stroke-like symptoms or not (asymptomatic).

• Antiplatelet medications (aspirin, clopidogrel) thin the blood and prevent clotting in the narrowed arteries, which allows blood to pass through more easily.

• Cholesterol-lowering statins help reduce plaque formation in atherosclerosis. Statins can reduce LDL "bad" cholesterol by an average of 25-30% when combined with a low-fat, low-cholesterol diet.

Surgical treatment is generally recommended for patients who have suffered one or more TIAs or strokes and who have a moderate to high grade of carotid stenosis. The aim of surgery is to prevent stroke by removing or reducing the plaque buildup and enlarging the artery lumen to allow more blood flow to the brain.

• Carotid endarterectomy is a surgical procedure to remove the plaque. A skin incision is made in the neck and the carotid artery is located. Temporary clamps are placed across the artery above and below the area of stenosis to stop blood flow. During this time, the carotid artery on the other side of the neck carries blood flow to the brain. The surgeon opens the artery over the blocked area. The plaque buildup is physically peeled out and removed. The artery is then closed with tiny sutures and the clamps removed to allow blood flow to the brain. 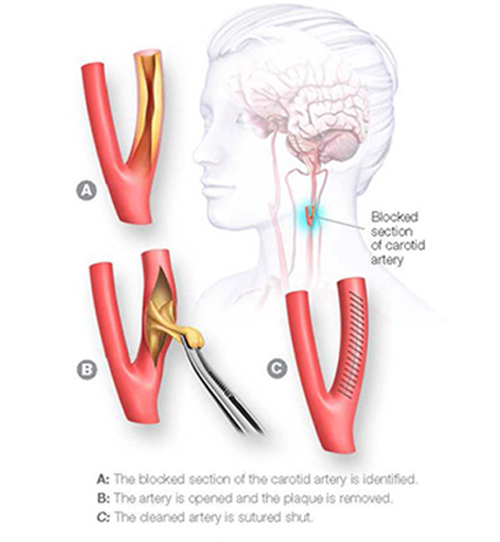 • As per the latest American Stroke Association guidelines carotid endarterectomy is typically indicated for patients who have had symptoms (stroke or TIA) and have blockage greater than 50%. Among patients with moderate blockage of 50 to 69%, surgery reduces the risk of stroke by 6.5% over a five-year period. The best results are seen in patients with high-grade blockage of more than 70%, the risk of stroke is reduced by 80%.

• Carotid angioplasty/stenting is a minimally invasive endovascular procedure that compresses the plaque and widens the lumen of the artery. It is performed during an angiogram in an interventional cath-lab suite. Using catheters and wires of varying sizes the area of the plaque is reached. A small balloon is opened which dilates the artery and compresses the plaque against the arterial wall. Finally, a self-expanding mesh-like tube called a stent is placed over the plaque, holding open the artery.

There are various indications for each of the above procedures which are best decided by your treating doctor.

By Dr Sunil Furtado
To submit your article / poem / short story to Daijiworld, please email it to news@daijiworld.com mentioning 'Article/poem submission for daijiworld' in the subject line. Please note the following: